The Shaping of Ancient Near Eastern Civilizations Often called the cradle of civilization, the ancient Near East witnessed the emergence of remarkable cultures from the fourth through the first millennia BCE. From those cultures surfaced novel systems of writing that addressed the range of lived experience, artistic and literary expression, and history and politics. While plentiful but not ubiquitous, clay became the medium for communication in inscriptions, in addition to its role as an essential material for construction, figurines and utensils. The Vanderbilt Divinity Library’s Cultures in Clay exhibit showcases original artifacts from this period, as well as photographs and descriptions, to provide an overview of these civilizations and their contributions to our understanding of the ancient Near East.

Cuneiform is a system of writing characterized by wedge-shaped impressions made by a stylus generally on a clay tablet or engraved on stone or metal. Cuneiform writing developed in ancient Mesopotamia at about the same time that hieroglyphic writing developed in Egypt. By the middle of the fourth millennium BCE, cuneiform was used in both Egypt and Mesopotamia to keep records, and it continued in use throughout areas under Mesopotamian control and influence until the 7th and 6th centuries BCE, when the Aramaic language and Phoenician script gradually replaced it. 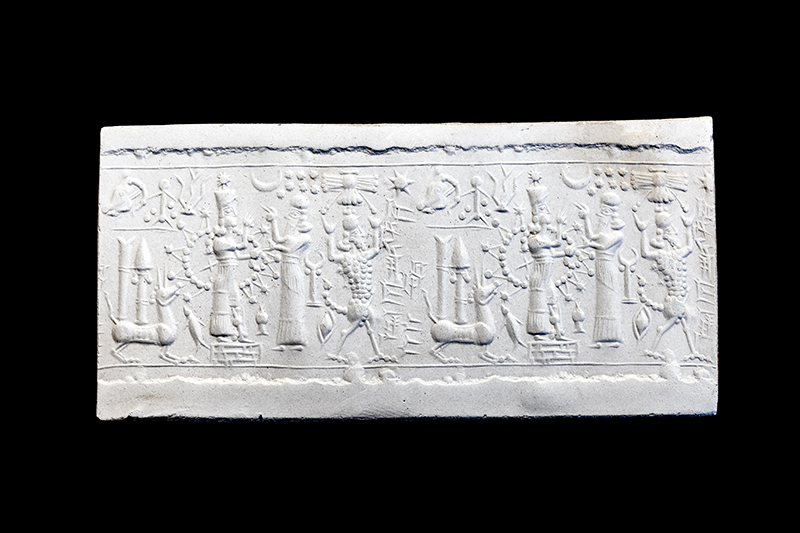 Cylinder seals were invented around 3500 BCE and came into use with the development of cuneiform writing. The seals retained their popularity through the Akkadian, Assyrian and late Babylonian eras. They were not only a mark of ownership but a form of legal signature to a written document. When the cylinder was rolled across the moist clay, it formed a raised impression and was then sun-baked for preservation. These seals, carried by officials and merchants, indicate how far reaching their trading was.