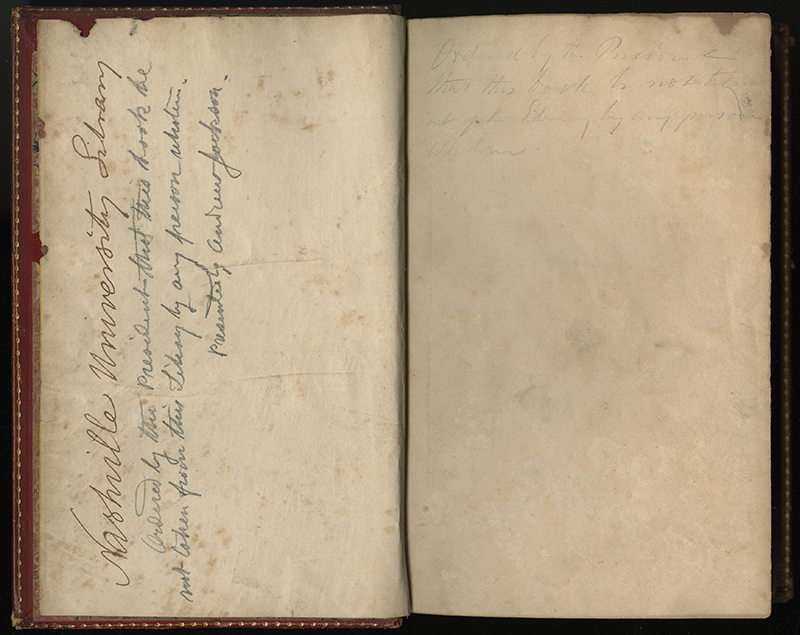 Life of Andrew Jackson: Major-General in the Service of the United States

This copy of The Life of Andrew Jackson was given by Jackson to Cumberland College. This 1824 edition appeared four years before Jackson became President. It includes a print of Jackson on the first page. Writing on the inside of the cover page, likely from the time the book was given, instructs that it not be removed from the Cumberland College library. John Henry Eaton, a U.S. Senator from Tennessee who later served as Jackson's Secretary of War, authored the book. Jackson is portrayed in a favorable light given the close relationship between the author and subject. 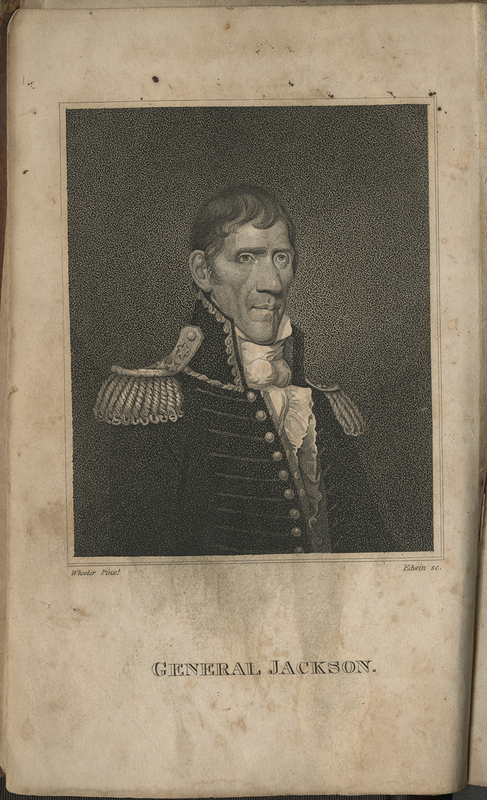 This first edition of The Life of Andrew Jackson, published exactly two hundred years ago, is notable for its inclusion of a rare photo of Jackson as a younger man. The captioned appears as “General Jackson.” The book was published in 1817 shortly after his victory at the Battle of New Orleans brought him national recognition. The same year witnessed Jackson begin campaigns against Creeks and Seminoles in Georgia, eventually leading to his capture of Spanish Florida for the United States. 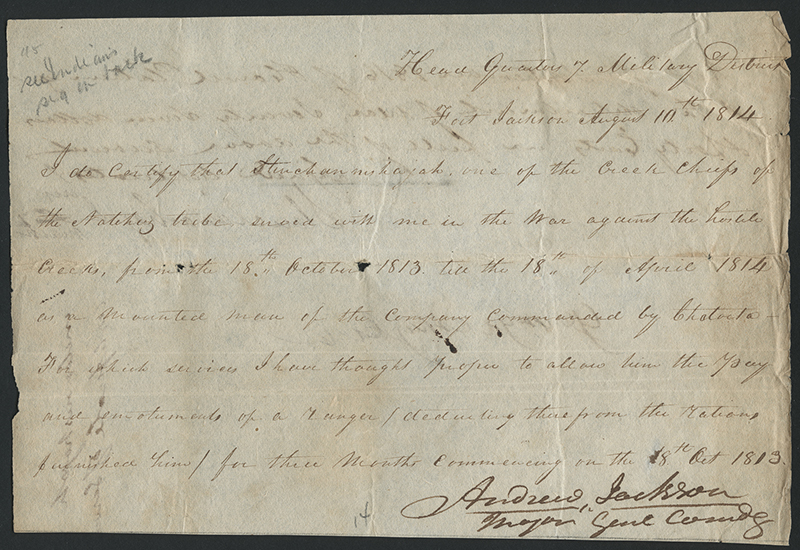 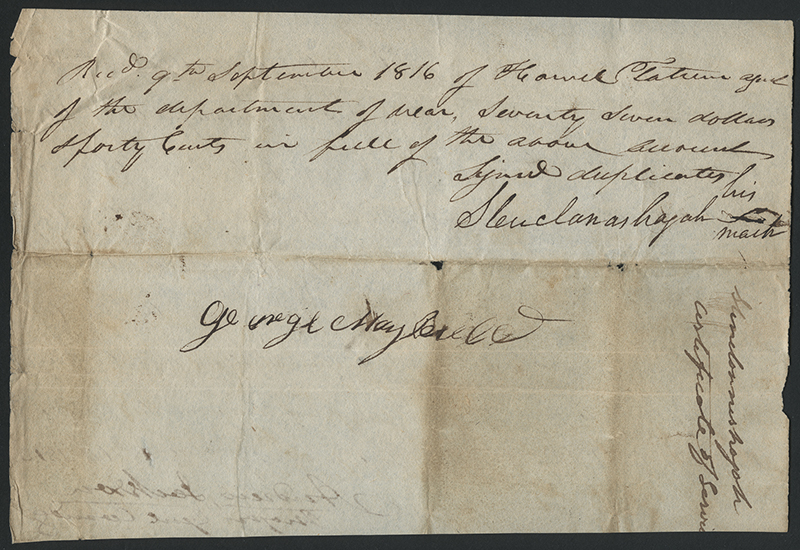 Andrew Jackson composed this letter after leading a military campaign against the Red Stick Creeks in present-day Alabama. He asks the U.S. Army to compensate Natchez Creek Chief Stinchannishajah for supporting his forces in battle. While some Native Americans allied with Americans in military conflicts, ultimately it did not exempt their nations from eventual removal. 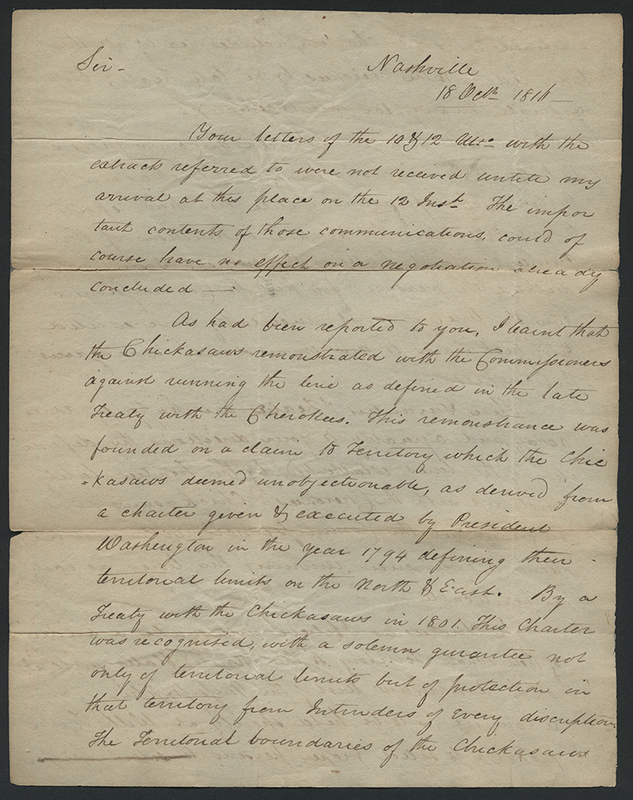 [Letter to William Crawford on Chickasaw and Cherokee Land Claims] 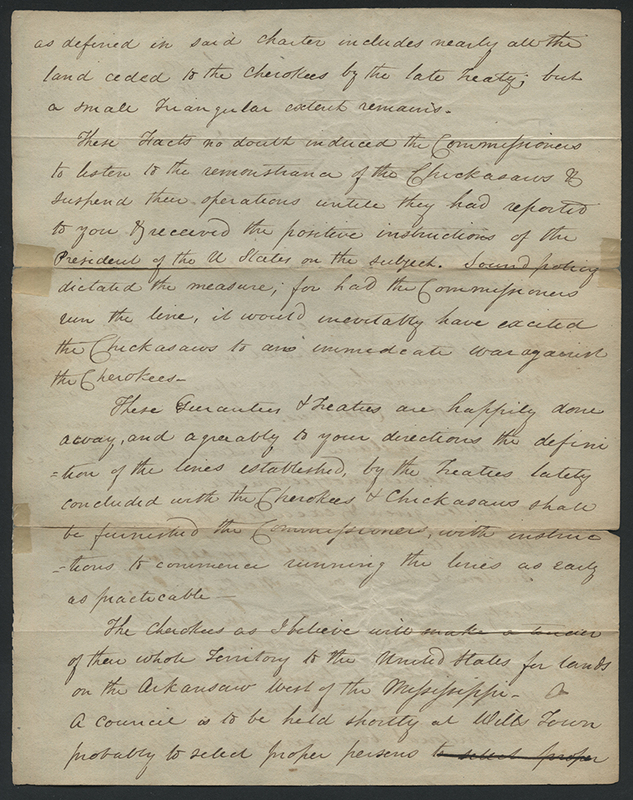 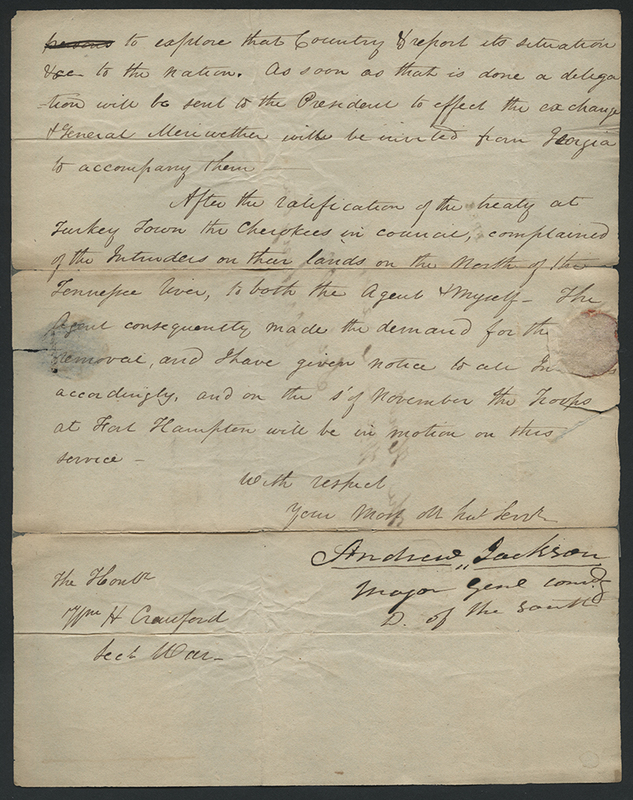 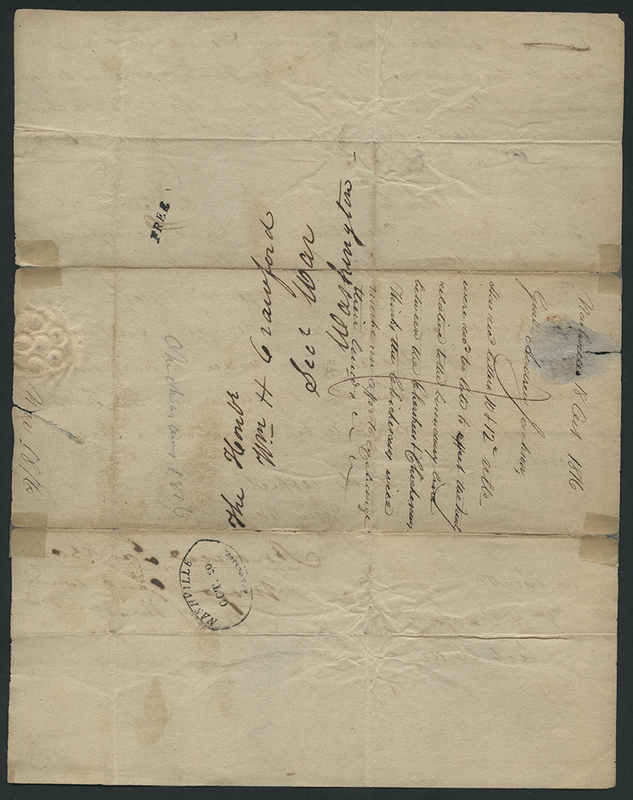 Land claims and treaties with the Chickasaw and Cherokee nations were discussed by Major General Jackson and Secretary of War William H. Crawford. Jackson suggests the Cherokee will cede all of their lands to the U.S. and move west of the Mississippi River. The letter foreshadows Jackson's policies as President over ten years later. 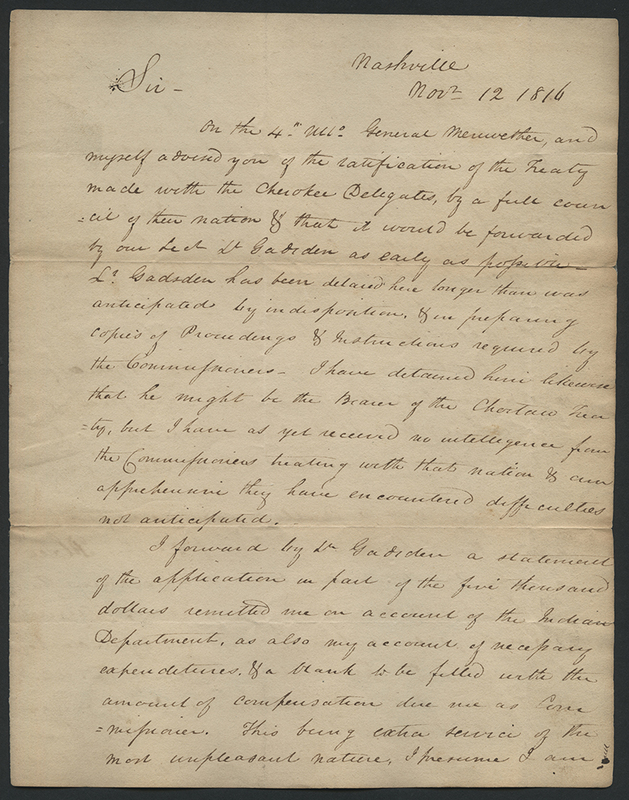 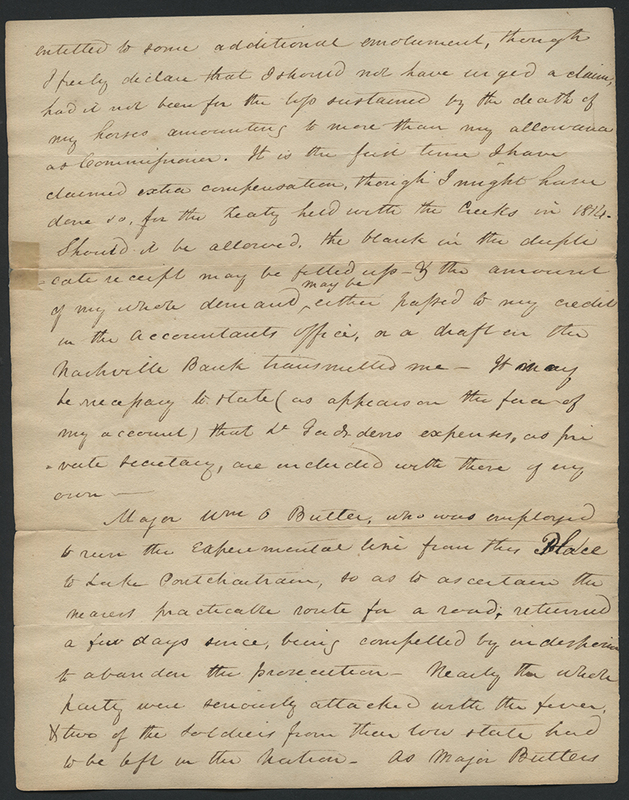 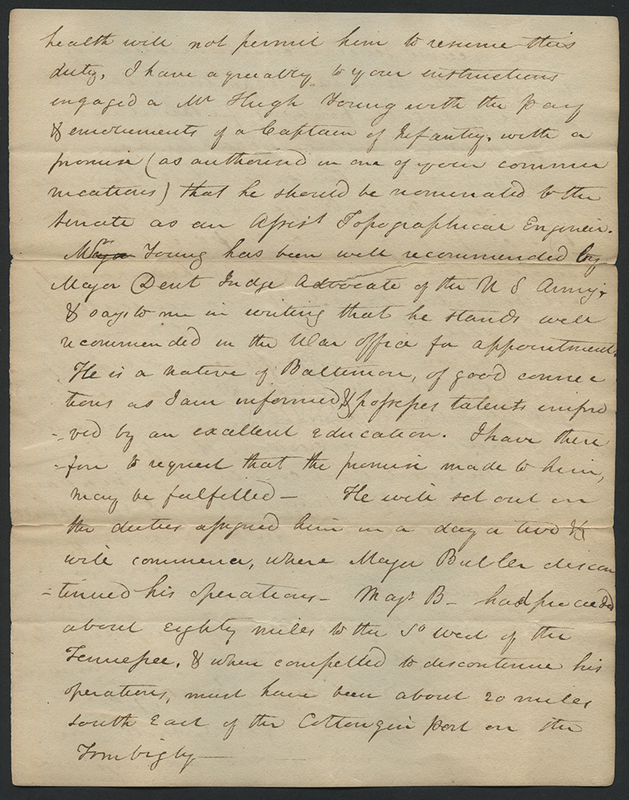 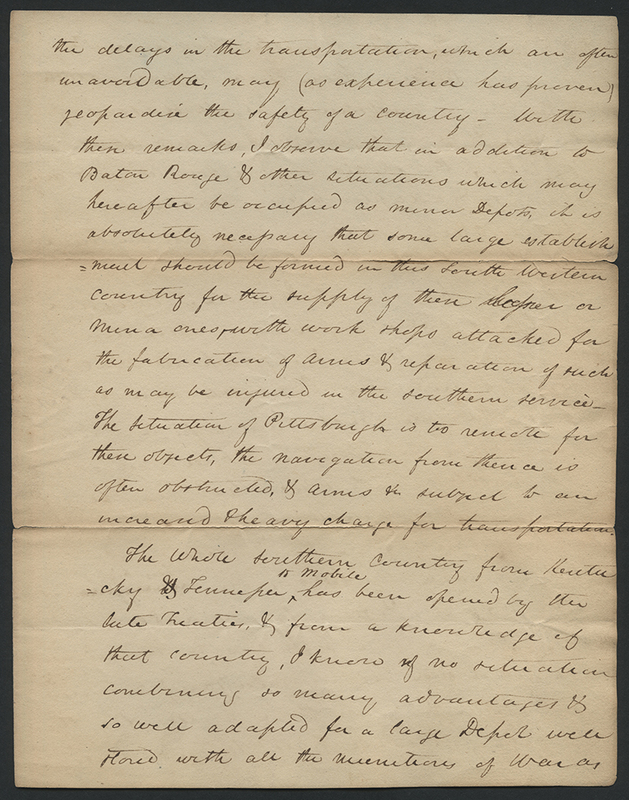 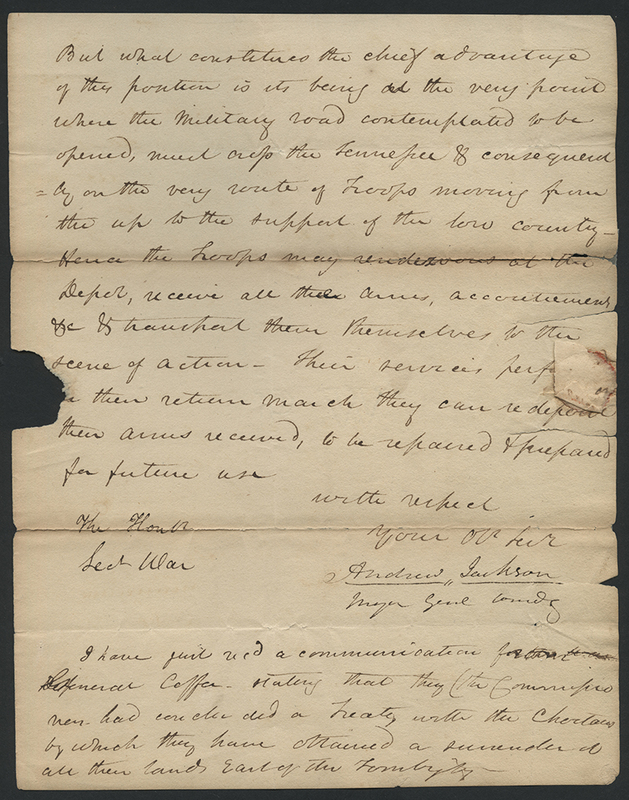 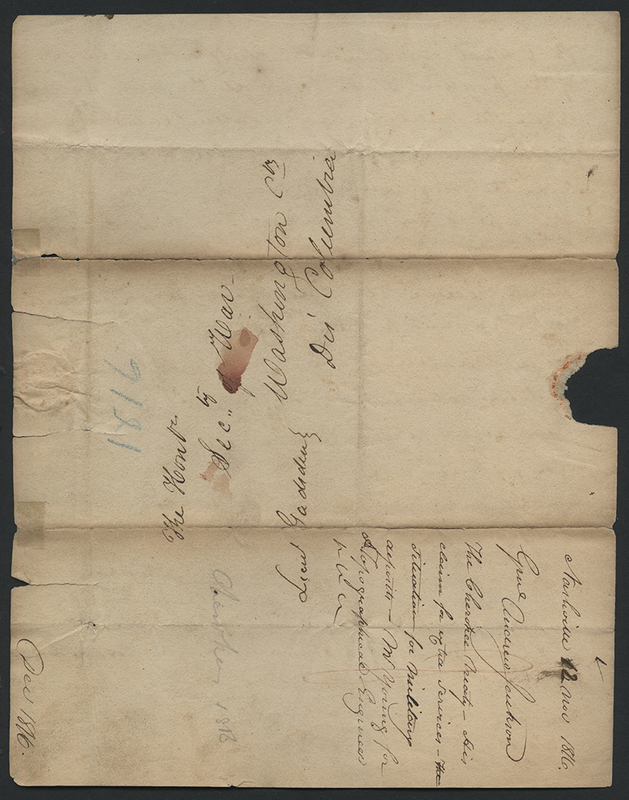 Major General Andrew Jackson composed this letter to Secretary of War William H. Crawford discussing matters of Native American treaties and removal. Jackson discusses the use of treaties to open land and water navigation from Nashville to New Orleans. He urges for the removal of Native Americans who will not cooperate.