Which artists’ books were published in Tennessee?

The printing press is perhaps the most recognizable piece of equipment in history for the printing of books. Letterpress printing has deep roots in Nashville, with its core at Hatch Show Print, maker of one-of-a-kind posters in simple, balanced layouts. Without the long history of traditional book arts that defines cities such as Boston, Philadelphia, or New York City, Tennessee artists and presses built themselves around personal and handmade methods: close working relationships with community members and co-working studios, artist in residence programs, a fondness for music and self-expression, and the use of found materials. Artists’ respect for history shows in simple iconography, handmade elements, and the incorporation of viscerally southern memories. These distinctions put local artists’ books in a category of their own.

By definition, artists’ books are works of art that were conceived of as a whole. While the design of some books are derived from their textual content, many are otherwise motivated by shape and form. The latter category often pushes the boundaries of bookmaking and draws the question: is this a book? Nashvillian and bookbinder Katie Gonzalez says “I've always had an eye for detail, so when it comes to the world of books, the papers I use are a top consideration. Texture gives each paper its unique fingerprint. It's what sets two seemingly similar cream sheets apart.” Such attention to paper, symmetry, and color is evidenced in her one-of-a-kind work [Color Wheel], made completely of recycled materials and devoid of any text or images. The piece forces attention on bookmaking itself, especially drawing attention to the structural stability and beauty of the spine.

Artist Lesley Patterson-Marx’s Songs in Color, made from an empty vintage paintbox, holds eight miniature books about colors in the empty wells that once held cubes of pigment. Patterson-Marx says, “I have always loved listening to music from the Great American Songbook, especially on WAMB, a beloved Nashville radio station. I was a dedicated WAMB listener from the time I moved to Nashville in 2001 to 2014 when the station went off the air. This work was inspired by the station that kept me company in the studio all those years.” Patterson-Marx’s blend of personal reflection, found objects and the handmade come together to conjure the crackle of a radio and the sound of beloved and historied songs from our past.

Life-long Nashville native Elizabeth Sanford describes herself as “a watercolor painter who was seduced by the book arts.” Indeed, artists’ books are a form she has made her own, blending the narrative of cutout landscapes, watercolor environments, and participatory elements in a form that invites viewers to touch and interact with her works. In this oversized tunnel book, Sanford painted multiple watercolor panels that each cast shadows onto the panel layered behind it. These shadows have their own role in the story, creating interplay with her other bright and inviting elements, such as a whimsical young girl, dancing in the cutout foliage, to construct a scintillating visual fairytale without even a single word of text.

Letters was a collaboration between Professor Kathleen O'Connell's book arts and letterpress classes at Middle Tennessee State University (MTSU) and visiting book artists, Peter and Donna Thomas." This artists’ book, designed in a flag book structure, devotes at least one page to each letter of the English alphabet. The design, content, structure, and actual work were conceived of by all parties, with input from students in the classes. MTSU's book arts courses encourage students to work with both traditional and non-traditional book forms and materials, all of which were brought to life in this hands-on experience with working book artists.

This small volume includes a beautiful collection of collaboratively written poems by lauded poets Emily Kendal Frey and Zachary Schomburg. The poems are paired with full-color letterpressed illustrations of wolves and a hand-sewn binding by Friedrich Kerksieck, proprietor of the Small Fires Press. This chapbook brings an interesting dimension to this exhibition case of artists’ books published in Tennessee, for its collaborators all cull strong influence from areas and memories outside of the state. While previously located in Memphis, TN, for a short while, Small Fires Press is now in New Orleans, LA. Kerksieck, a graduate of the University of Alabama program in book arts, connects him with many of the other fellow alumni from the same program who are represented in this collection. Poets Kendal Frey and Schomburg both call Portland, OR, their home, weaving fascinating new connections into the Tennessee book arts landscape within our data visualization for this collection. 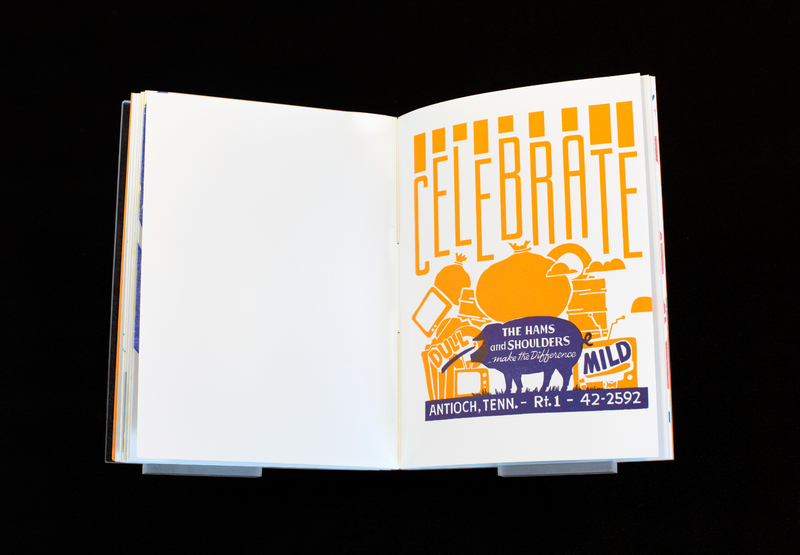 Among the most famous names in letterpress is none other than Nashville’s Hatch Show Print, a press shop started in 1879 by brothers Charles and Herbert Hatch. The golden age of Hatch was from the mid 1920s until 1952, when original founder Charles’s son Will passed away. The golden age coincided with a similarly vibrant time for country music, and Hatch famously captured the magic in their simple and typographically vibrant layouts, made into hand pressed posters for concert goers and businesses. This book, conceived of by Jamie Mahoney, artist and head of the Bowe House Press out of Virginia Commonwealth University, was carried out by nine design students from the school, who each collaborated with a poet. After selecting a Hatch woodblock dating back to the 1930s, the poets then composed original material in response to the woodblock. These collaborations are printed side by side in the pages of Think Hatch.

Tennessee-born Dan Brawner grew up on the streets of Nashville, and has held fast to the city that raised him, translating his experiences and inspirations into drawings, graphic design, and mixed media artwork. In his books, Brawner combines photomontage with hand drawn illustrations, crafting unique pieces whose meanings are left to the viewer. In Anima, the artist repurposed pages from a children’s book about wild animals into an artist's book by adding hand drawn illustrations and decoupaged cut paper works. He is Associate Professor and Department Chair of graphic design at Watkins College of Art, Design & Film in Nashville.

Book artist David Schenck, perhaps better known for his publications in medical journals, is a working research professor in biomedical ethics. Schenck co-founded the Est et Non Press in Nashville, TN, with Elizabeth Sewell in 1990, and the two aimed to publish books that “address our longing for sense, our penchant for nonsense.” His analytical artistic sensibility can perhaps best be understood in his choice of “Est et Non” as the name for the Press, which he explains on his website: “[Est et Non], “yes and no,” is a phrase appearing in the Descartes third dream ... which he would later refer to as ‘The Olympica’...[Descartes] interpreted these words … to indicate a union of poetry and philosophy.” Fittingly, Schenck broaches this very topic in Tonalities of Grief, which takes on a complex flag book structure to share philosophical notes from an academic lecture, coded with symbols on the verso of the book’s choppy ‘pages.’