Another Nürnberg Tribunal: The Krupp Case

Twelve officials of the German armament firm Krupp stood trial in Nürnberg for war crimes and crimes against humanity. Eleven were convicted of deportation, exploitation, and abuse of slave labor. Krupp officials forced over 100,000 women, men, and children to work under appalling conditions. These documents belonged to the tribunal's presiding judge, Hu C. Anderson, of Jackson, Tennessee, part of a collection processed by Dean's Fellow Jennifer Alexander.

Jennifer Alexander, a spring and fall 2016 Dean’s Fellow, talks about key findings in the Alfried Krupp Trial Papers, the tenth in a series of twelve military tribunals held in Nuremberg, Germany, at the end of the Second World War. The completed project will be a finding aid for these important papers. 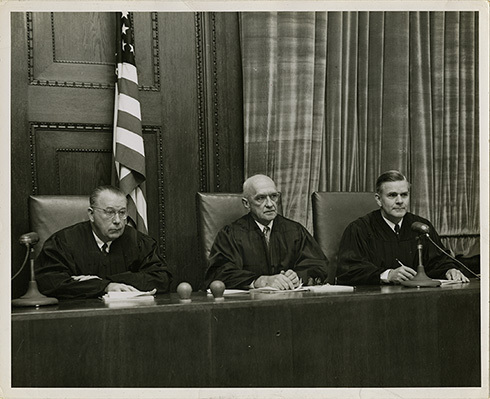 From left to right are Krupp Tribunal judges Edward J. Daly, Hu C. Anderson (presiding), and William J. Wilkins. The U.S. Office, Chief of Counsel for War Crimes indicted German industrialist Alfried Krupp and 11 other officials of the Krupp firm of: 1.) planning, preparing, initiating, and waging aggressive war; 2.) plunder and spoliation of occupied countries; 3.) deportation, exploitation and abuse of slave labor; and 4.) common plan or conspiracy to commit crimes against peace. On July 31, 1948, the judges convicted 6 defendants of count 2 and 11 of count 3. Prison sentences ranged from 2 to 12 years, and Alfried Krupp’s properties were confiscated. In 1951, however, the U.S. High Commissioner for Germany commuted the sentences to time served and reinstated Krupp’s properties.

Tennessee Judge Hu Carmack Anderson (1890-1953) appears in the center of this photograph, surrounded by colleagues in the Jackson Bar Association. For much of his professional life, Anderson served on the Tennessee Court of Appeals as judge (1933-1942) and presiding judge (1942-1953). On November 12, 1947, he was appointed presiding judge of the Krupp case, one of three Nuremberg trials against industrialists in Nazi Germany. The Vanderbilt Law School chapter of the Order of the Coif inducted Anderson as an honorary member in 1952 in recognition of his outstanding service in Tennessee and Germany. 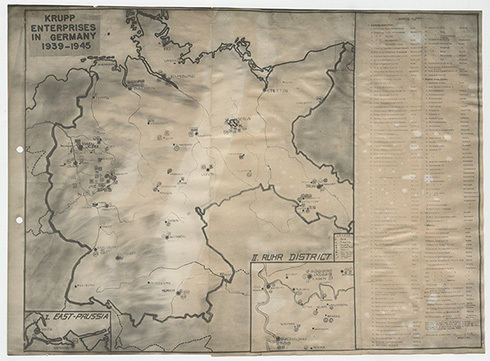 A German family business for centuries, Krupp had become an enormous steel and armament manufacturer by the 20th century. During both world wars, Krupp was Germany’s main supplier of weapons. In 1943, with family patriarch Gustav Krupp’s health failing, son Alfried became sole owner and leader of the family enterprise (Fuhrer der Betriebe) following Hitler’s decree, known as the Lex Krupp.

Offered by the prosecution for trial reference, this map shows individual Krupp plants in Nazi Germany. According to the prosecution, Krupp operated approximately 175 domestic plants and 60 foreign plants. As Box II indicates, the heart of Krupp was Essen, where over 80 plants were clustered. 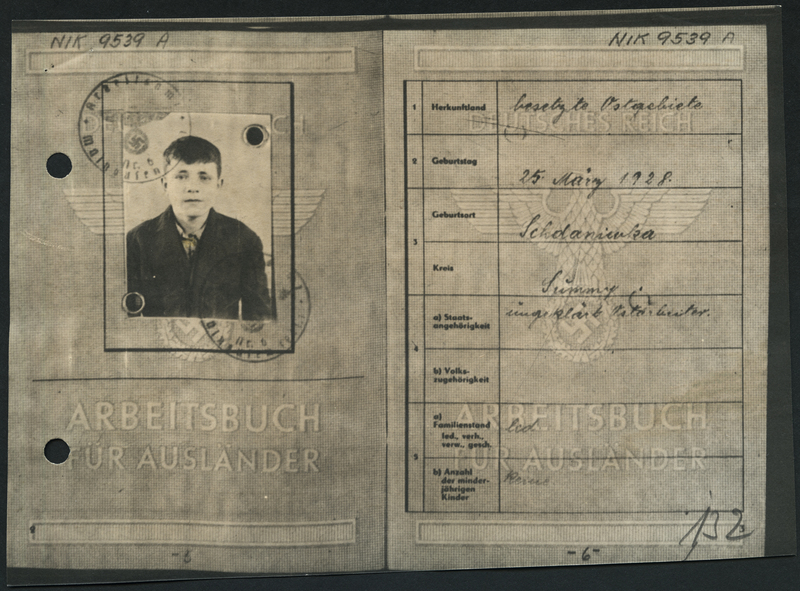 Issued by the Nationalsozialistische Deutsche Arbeiterpartei (NSDAP), this foreigner’s employment book was made for Michael Garjainow, one of many children forcibly transported to Germany and compelled to work for German firms during the war. Michael was born on Christmas Day, 1928, in northeastern Ukraine. His work permit lists his citizenship as “undeclared, Eastern worker” (ungeklart, Ostarbeiter). “Eastern worker” was a derogatory Nazi neologism for Russians and Ukrainians. At age 13, Michael started working at the Krupp Krawa plant in Essen until it was bombed in March 1943. He was then taken to work at the Elmag plant in Alsace, which had been seized by the Krupp firm as an alternative production site for German military tractors and antiaircraft guns. 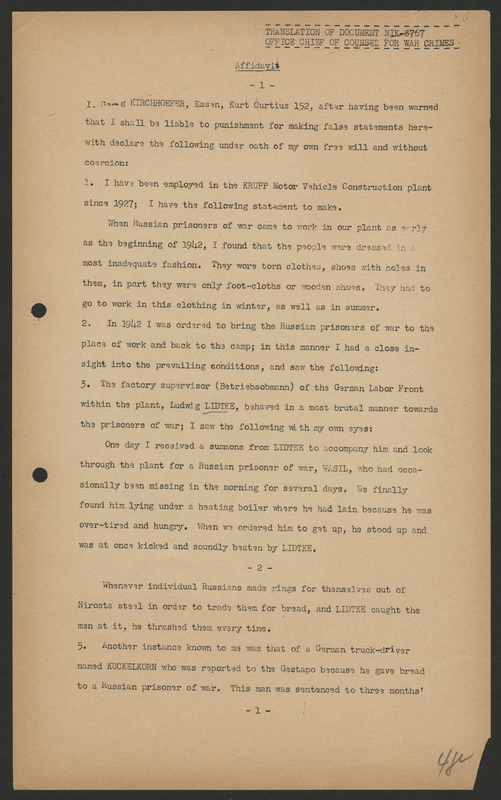 While all forced laborers in Krupp factories suffered from terrible work and living conditions, Soviet prisoners-of-war and Jewish concentration camp prisoners fared the worst. Some died in a brutal manner in Krupp factories. Georg Kirchhoefer is one of many Krupp employees who testified to the physical abuse and extreme malnutrition of Soviet prisoners-of-war. After its office received numerous complaints from the Essen populace about mistreatment of prisoners-of-war at Krupp plants, the Supreme Command of the German Armed Forces admonished Krupp and instructed the firm several times to provide full food rations (NIK-12356). Trial documents indicate that the firm never complied.

In 1944, Rosa Katz was taken from Gelsenberg Concentration Camp to Essen with a group of 520 Jewish women and girls whom defendants referred to collectively as “the Hungarian Jewesses,” although they came from various places. Krupp contracted to pay the Waffen-SS, Buchenwald, 4 Reichsmarks per day for each prisoner (NIK-7303). Defendant Ihn admitted in an affidavit that he ordered defendant Lehmann to return “these people” to Buchenwald just before the war’s end (D 274). Ms. Katz’s description of malnourishment, unsafe living quarters, abuse, brutal overwork, and inadequate clothing and air-raid protection was elaborated in others’ testimonies, including Krupp employees, several of whom received training as female SS guards specifically for these 520 women and girls at Krupp (NIK-11730). 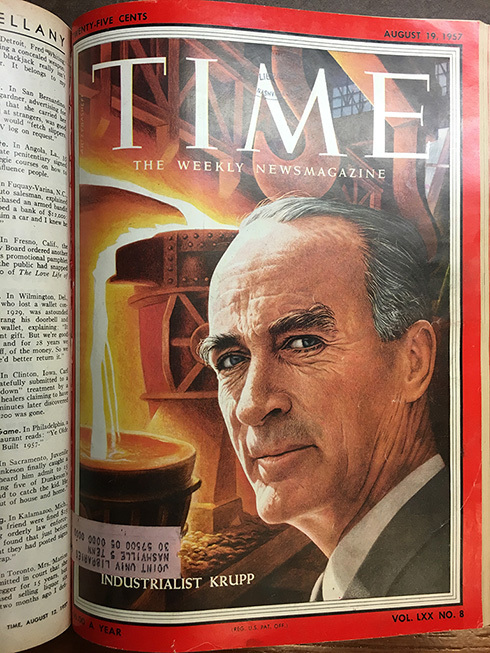 This August 19, 1957, Time Magazine cover shows Alfried Krupp von Bohlen und Halbach. According to the cover story, just 6 years after his sentence was commuted and his properties returned, Krupp was the richest man in Europe and possibly the world (p. 69). Krupp shared his appreciation of the article’s benevolent tone in the September 9, 1957, issue: “I LIKE THE TIME COVER STORY ABOUT ME AND MY WORK VERY MUCH. IT PROVES AGAIN WITH WHAT CARE AND OBJECTIVITY THE WORK IN YOUR PUBLISHING HOUSE IS BEING DONE.” In the same issue, George Tesar of Sioux Falls, South Dakota, also responded to the cover story: “Sir: Your article sounds as if I should have been proud to have labored and almost died in one of Mr. Krupp’s slave-labor camps during the war.”

Telford Taylor served as Chief of Counsel for War Crimes on the 12 subsequent Nurnberg tribunals after working as assistant prosecutor on the International Military Tribunal of major German war criminals. After the tribunals, Taylor practiced law and became a professor of law at both Columbia University and Yeshiva University law schools. This sound clip is of Taylor on November 30, 1983, delivering the opening lecture for the 6th annual Vanderbilt Holocaust Lecture Series (HLS), which remains the longest running series of its kind at a U.S. university. The accompanying article from The Vanderbilt Hustler discusses Taylor’s lecture and other 1983 HLS events.