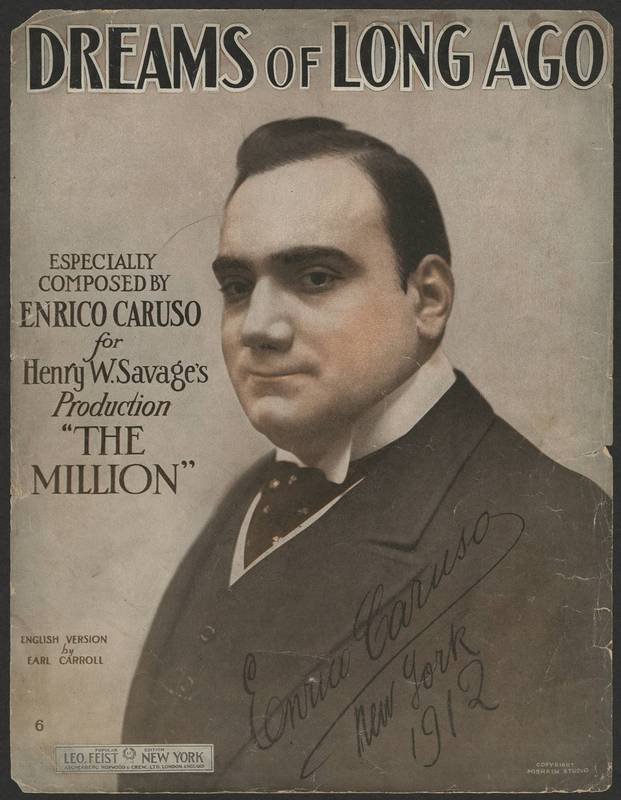 World-renown Italian Tenor Enrico Caruso was born February 25, 1873, in Naples. Though many biographers claim that he was the 18th of 21 children born to his parents, he was in fact the third of seven children. Caruso developed a love of music early in life and at the age of 20 began his musical career as a professional opera singer in Italy. His fame and popularity quickly grew and soon the young tenor was singing at La Scala, the Paris Opera, and the Royal Opera House. In 1903, Caruso performed in New York at the Metropolitan Opera House. He would remain one of the Met's biggest stars until his untimely death in 1921. Though Caruso's repertoire included a diverse array of leading roles, he is best remembered for the role of Canino in Il Pagliacci  and Radames in Aida.  Caruso, a shrewd businessman despite his lack of formal education, was also one of the first artists to record songs, establishing an exclusive contract with the Victrola Company in the early days of recording technology. He would earn more in royalties from these recordings than he did from his salary at the Met. An assiduous collector of stamps, bronzes, and antiques, Caruso also kept a postcard collection. In fact, one sees evidence of Caruso’s stamp collection within the postcard collection. Several cards have stamps removed or corners cut out where Caruso scavenged stamps for his other collection.  The portion of his postcard collection shown in this exhibit includes cards he collected for himself over the years as well as cards sent to him by friends and admirers. This collection gives us a glimpse into Caruso’s global network of friendships, as well as his extensive collecting habits.