Figurines of gods and goddesses are among the most numerous works of art from ancient times. Their popularity derived from the people’s desire to embody religious sentiments in the form of deities representing natural phenomena, human emotions, life’s dangers and delights, and political and cultural forces. At the same time they demonstrated aesthetic tastes and artistic finesse. While clay served as the most common medium for figurines from early to late times, bronze proved to be a more durable material after its introduction in the ancient Near East ca. 3300 BCE. 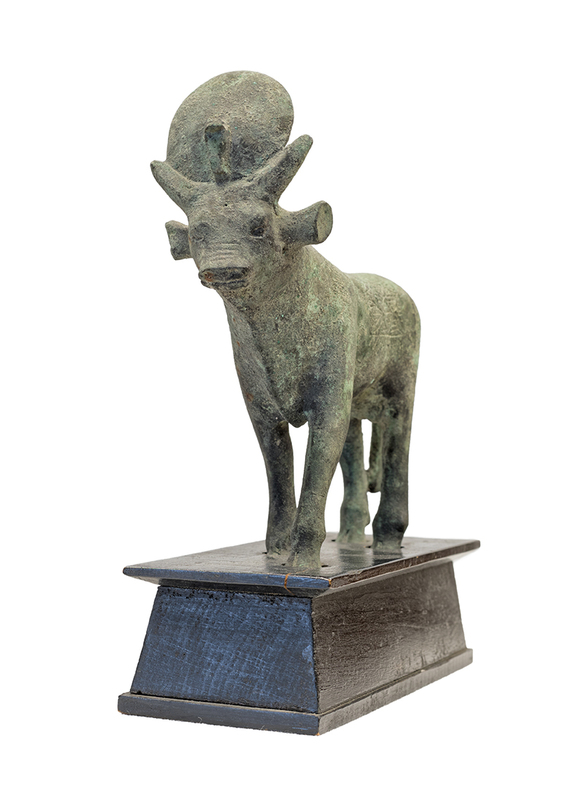 The manifestation of Ptah of Memphis, the Apis figurine is typically black, sometimes with a white triangle on the forehead. Between its horns are the sun-disk and the cobra Uraeus. Several features are inscribed on its back:  on its shoulders and rump are the wings of the vulture-goddess, and in between as well as on the neck is ornamentation appearing to be textiles. The Apis bull was used as an oracle on festival days in Memphis. Apis is Greek for Egyptian Hep or Hapi. Loan from Emeritus Professor Douglas A. Knight.

Osiris, God of the Underworld Figurine

Osiris’s body is typically portrayed in mummified form, with the arms projecting outward to hold the royal scepters – the crook on the right and the flail on the left. The conical war helmet, the hedyet from Upper Egypt, has a cobra at the forehead. As the lord over the gloom of the underworld, Osiris is often regarded as the counterpart of the sun-god Re. In this piece, Osiris assumes the position of the judge seated in the law court overseeing the judgment of the good and the bad. Loan from Emeritus Professor Douglas A. Knight.

Bes, Protector of the Family Figurine

The dwarf-god Bes appears fierce and often grotesque but is actually benign in character. He serves as the protector of the family, especially of children and of women in hard labor. His ugliness was considered a deterrent to evil spirits, and he was often imaged in an aggressive posture with knife held high to fend off threats against the family. At the same time, he is also associated with music and merrymaking, and in other contexts was the patron deity of war and hunting. Bes is depicted with a plumed crown and the mane and ears of a lion. He is usually, as here in the bronze figurine, sticking out his tongue in a playful or aggressive manner. This Bes figurine, fashioned from clay, is missing the knife or sword he was holding over his head. Loan from Emeritus Professor Douglas A. Knight. 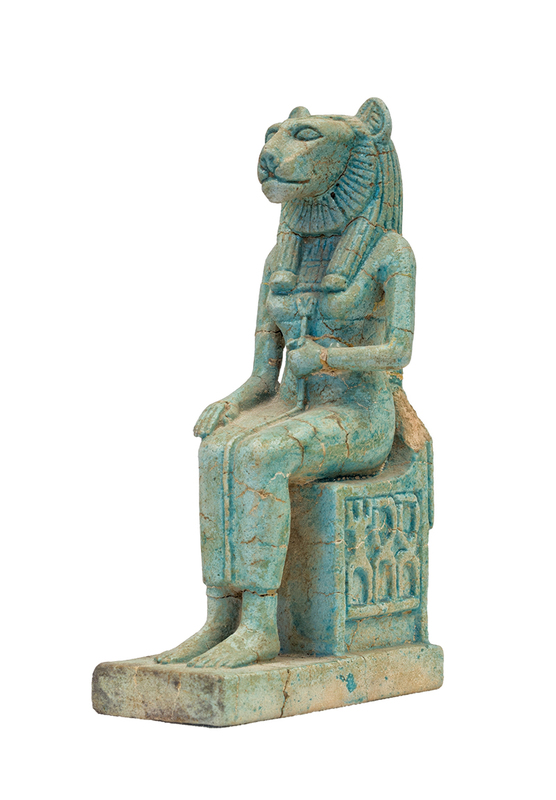 Sekhmet, the Lioness-Goddess of Memphis Figurine

Sekhmet, meaning “powerful,” is depicted with the body of a woman and the head of a lioness. A daughter of the sun-god Re, she became the consort of Ptah of Memphis. She is associated variously with fire, war, and healing. Here she is seated on a throne holding a scepter in her left hand. Loan from Emeritus Professor Douglas A. Knight.