Transfixed. Titillated. Representations of feminine beauty and far-off lands fascinated 18th century readers because of their unfamiliarity. Weaving together stories and images of women and foreigners creates a unique reading experience in which the female form becomes exotic and the foreign body is eroticized – a juxtaposition that tantalizes the reader.

Cara Wilson, a graduate student in Hanna Roman’s spring 2016 “Rethinking the Enlightenment French Novel” class, discusses how the development of reading for pleasure, and specifically the pleasure derived from reading depictions of the foreign and the exotic, was both a physical and metaphysical experience. 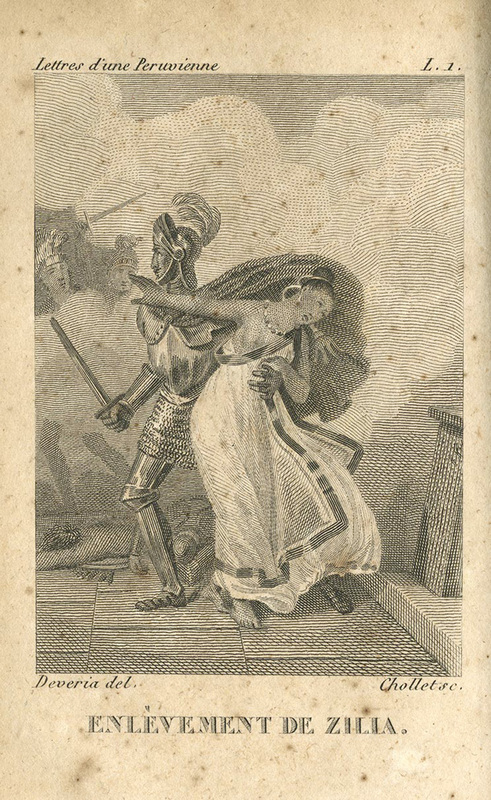 This epistolary novel by Madame de Graffigny tells the story of a young Incan princess abducted from the Temple of the Sun by the Spanish. Through a series of letters to her Incan lover, Aza, Zilia recounts her abduction, her rescue by French sailors, and her friendship with Captain Déterville. Often compared to Montesquieu’s Persian Letters, this novel also presents a satirical view of French life by considering society from the perspective of Zilia. As evidenced in the image, she was often represented as an exotic female in her traditional, Incan dress. This juxtaposition of traditional clothing with the baring of one breast hints at the sensuous way in which this foreign female was perceived by French society. The caption reads, “Enlèvement de Zilia” (Abduction of Zilia). 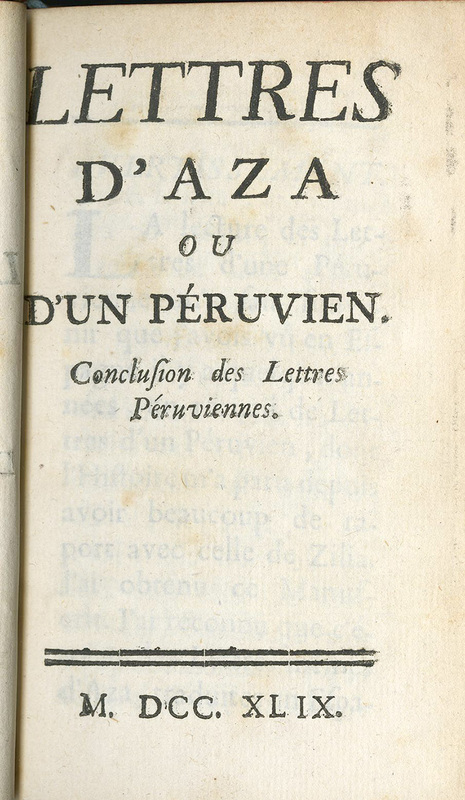 In this particular edition of Madame de Graffigny’s novel, Letters from a Peruvian Woman, the editors included Letters from Aza or from a Peruvian Man at the end, an epistolary novel authored by Ignace Hugary de la Marche-Courmant and written from the perspective of Zilia’s lover, Aza. The conscious decision to juxtapose these two novels evokes a series of questions. Was the Letters from Aza considered a conclusion to de Graffigny’s novel? If so, was this an attempt by a male author to censor a female author and her writings on the female experience? 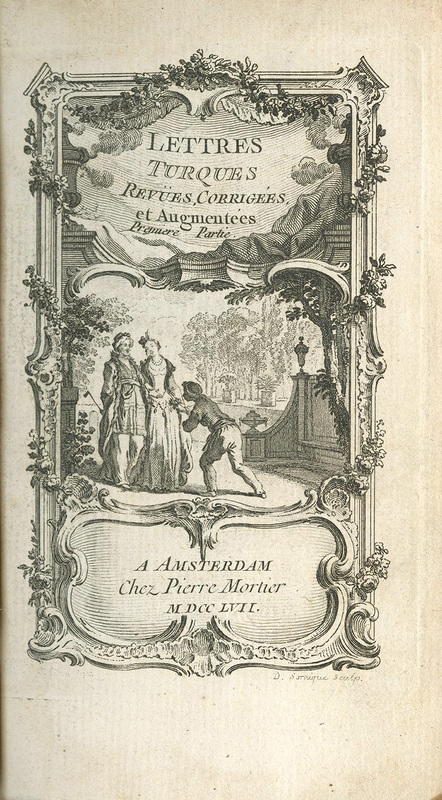 After the success of Montesquieu’s Persian Letters, the representation of the exotic in the epistolary novel became a popular form for imitation. The Turkish Letters written by Germain-François Poullain de Saint-Foix is also a satirical critique of French values and traditions, this time from a Turkish perspective. Rosalide, the daughter of the grand vizier of Constanipole, flees to France with her Italian fiancé, Mazaro, after the execution of her father. The book is a compilation of her letters to her sister Fatime. The image in the inside cover evokes a certain exoticism: the oriental influence in the clothing of the couple and the dark skin of the servant. Why is the exotic so provocatively displayed in these books? Why was it so frequent to render exotic stories of the female experience? Why did readers need a certain distance in order to accept these stories? 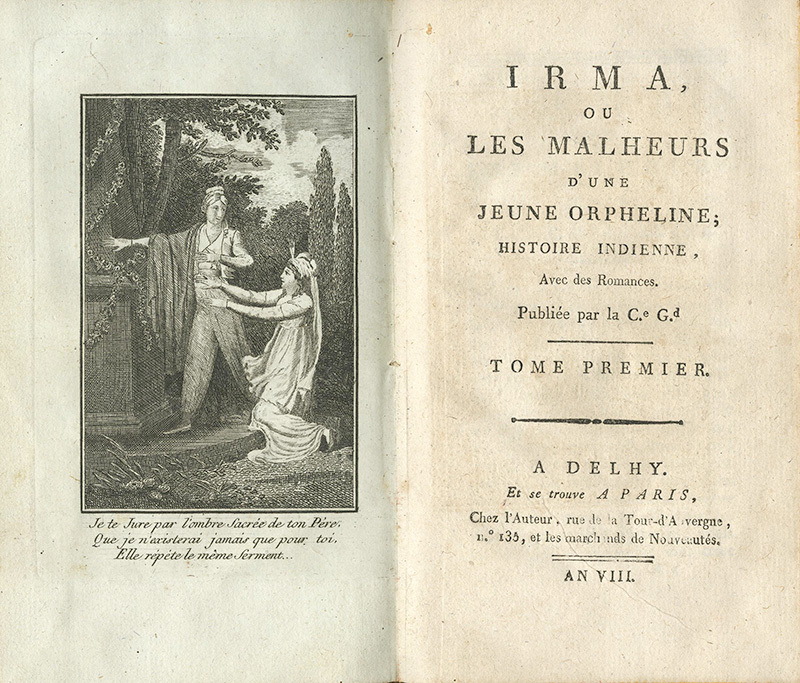 As evidenced in the image, the characters’ oriental dress, which was a popular contemporary fashion, promises readers a taste of the exotic within the pages of the novel. Furthermore, the image depicts a scene in which the beautiful orphan swears a vow of eternal love and devotion, which promises a sensuous story with an exotic setting. The caption reads, “Je te Jure par l’ombre Sacrée de ton Père, Que je n’existerai jamais que pour toi, Elle répète le meme Serment…” (I swear to you by the sacred shadow of your father that I will only ever exist for you. She repeats the same vow.) 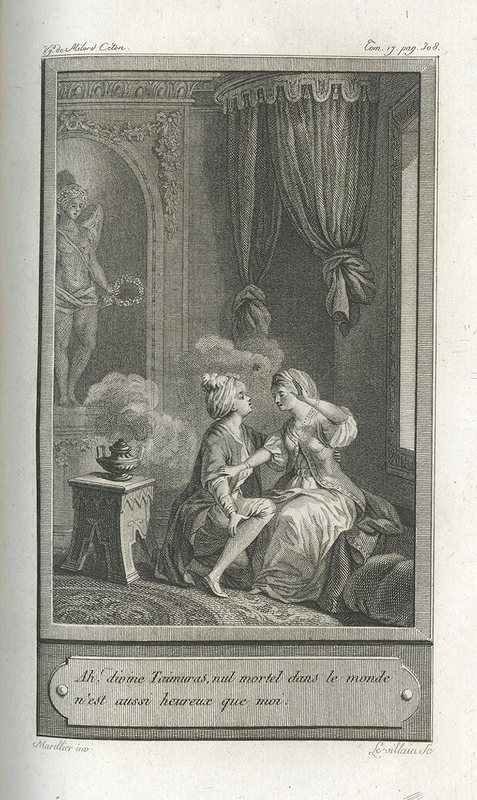 This book is the 17th volume in a compilation of fantastic stories about journeys to exotic, far-off places. As evidenced in the image, the oriental dress of the characters promises readers a taste of the exotic within the pages of the novel. Fantastical settings often allow writers to cloak risky or dangerous ideas. How does the representation of the exotic in fiction allow the author and reader to explore reality? Furthermore, the image depicts an amorous tension between the man and woman, suggesting a tantalizing story of sensuality for readers. What role does exoticism play in the telling of a love story? The caption reads, “Ah! divine Tamuras, nul mortel dans le monde n’est aussi heuruex que moi” (Ah! divine Tamuras, no mortal in the world is as happy as I). 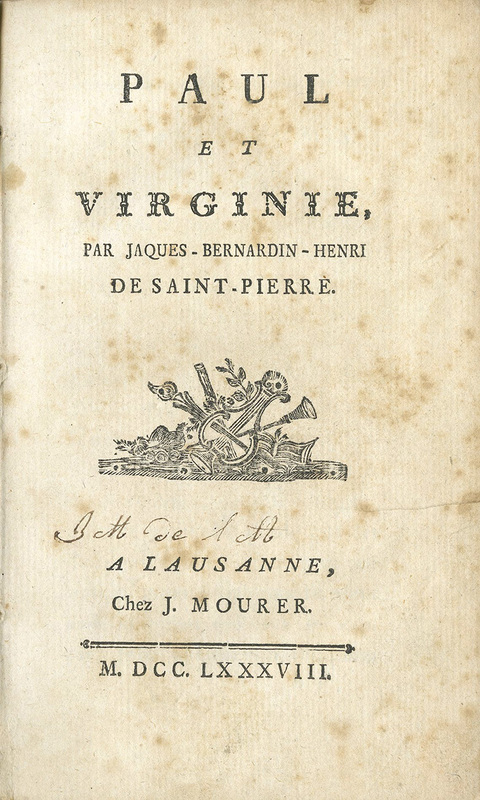 Bernardin de Saint-Pierre’s beloved classic Paul and Virignia depicts the island of Mauritius as a paradisiacal haven for the characters in the novel. During this age of exploration, reading about exotic locations was often a source of pleasure and fascination for 18th century readers. Furthermore, the island location serves as a setting where societal norms can be disrupted and inverted. Whereas the blossoming love between Paul and Virginia, who were raised as siblings on the island, was frowned upon in mainland France because of class differences, it flourishes on the island. The island utopia is rendered distant and fantastical in the reader’s imagination and becomes a place of social experimentation and speculation. 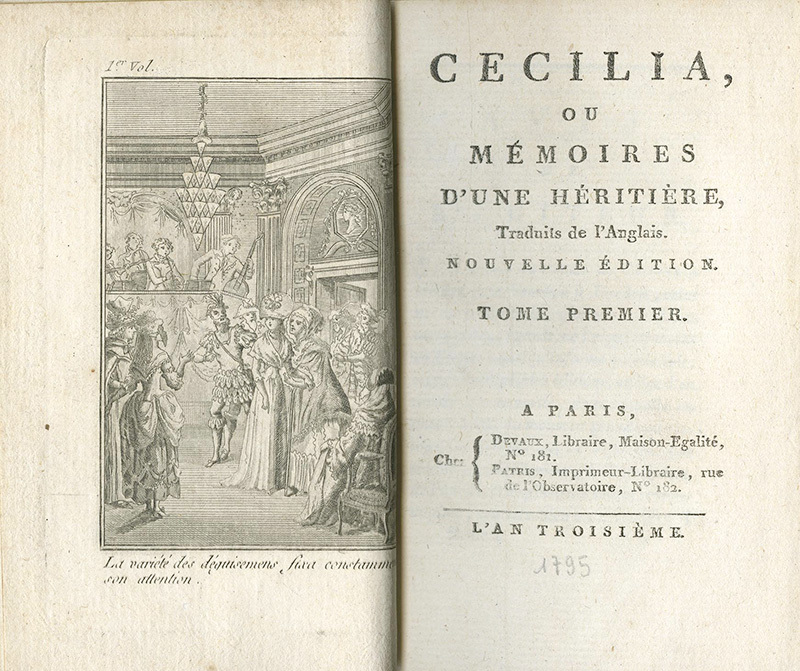 Written originally in English, Frances Burney recounts the story of Cécilia Beverly, a beautiful orphan who embarks on a trip to London in the hopes of marrying well. She is the heiress of her uncle’s fortune, and his will stipulates that she must marry a man willing to take her surname and become Mr. Beverly. Valued for her wealth, beauty, and youth, Cécilia is immediately coveted by the already married Mr. Monckton. Juxtaposed with the old, ugly Mrs. Monckton, Cécilia, who arrives from the country with her youthful vitality and fresh-faced beauty, becomes an almost exoticized female figure by male suitors who desire to ensnare the unfamiliar. Furthermore, this French translation of the novel represents a desire by French readers to immerse themselves in a world not their own – the world of a girl from the English countryside. The caption of this image from the book reads, “La variété des déguisemens fixa constamment son attention” (The variety of costumes transfixed her) just as the reading of this story does for readers. 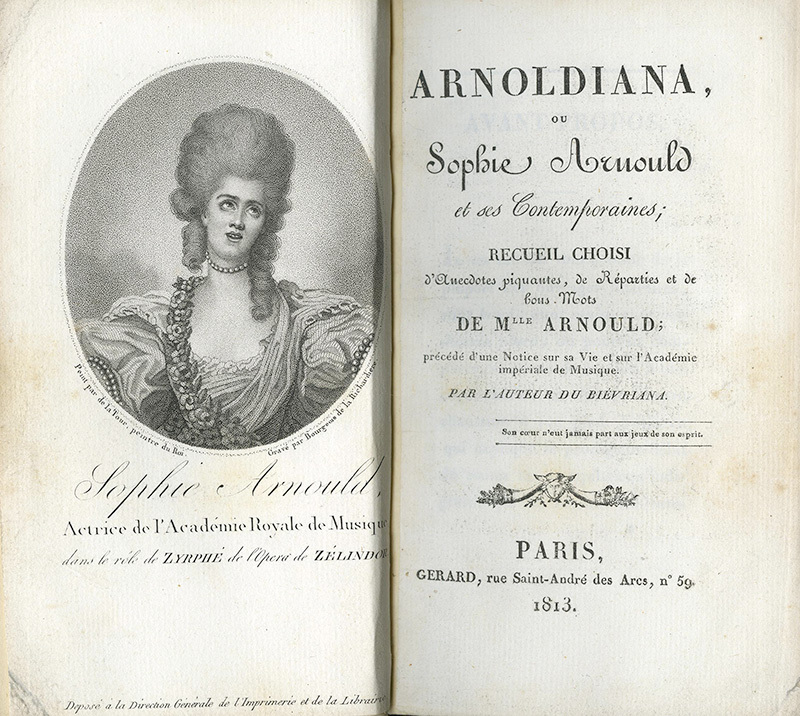 The portrait in the inside cover was painted by the royal painter, Maurice Quentin de la Tour, and depicts the celebrated singer and actress of the Académie Royale de Musique, Sophie Arnould in her role as Zyrphé in the opera Zélindor. This collection of her correspondences and ponderings collected by Deville gives an intimate glimpse into the life of the famous soprano. Often the subject of curiosity for their unusual lives, singers and actresses like Mlle Arnould were a source of fascination for French society. Actors and actresses inhabited a fantastical world between reality and fiction. They were both themselves and the character they embodied on stage. Thus, audiences were equally transfixed and frightened by them. 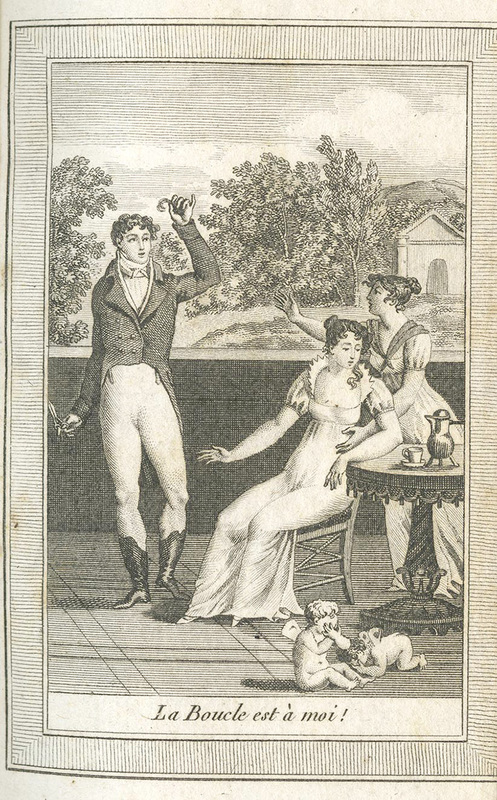 Found in a book labeled Mélange on the binding, the poem “Boucle de cheveux enlevée” was written by the celebrated English poet, Alexander Pope, and translated from the original English entitled "Rape of the Lock." This book is an odd compilation of seemingly unrelated texts. Were they merely a collection of the owner’s favorite texts? Or were the texts meant to evoke one another in strange, unexpected ways? This poem satirizes a minor incident between the ravishing Arabella Fermor and her suitor, Lord Petre, by comparing it to an epic of the gods. In his lust for Arabella, Petre cuts off a lock of her hair without her permission, thus creating a breach between their families. The allusion to classical mythology can be interpreted as a form of exoticizing the familiar or the trivial. In the poem, hair is emblematic of female beauty and sensuality. The removal of the curl of hair from the female head is form of defamiliarization that emphasizes the erotic subtleties of the object itself. Consider how the use of the word “rape” in the original English title more clearly denotes the association between hair and female sexuality. 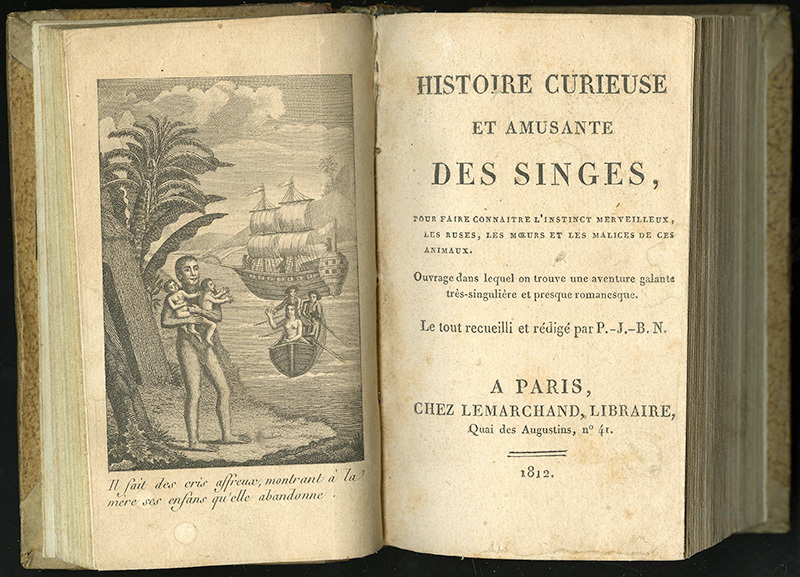 Found in a book labeled Mélange on the binding, this Histoire curieuse et amusante des singes follows the poem “Boucle de cheveux enlevée,” a translation of Alexander Pope’s “The Rape of the Lock.” This text presents itself as an anthropological study of monkeys. As evidenced in the image, the “monkeys” more closely resemble humans than animals. The elision between the native people and monkeys depicts racial prejudices of the time. Furthermore, it depicted a desire amongst Western culture to conduct “studies” on the unfamiliar. The caption reads, “Il fait des cris affreux, montrant à la mere ses enfans qu’elle abandonne” (He emitted horrible cries, showing the mother the children that she abandons.) 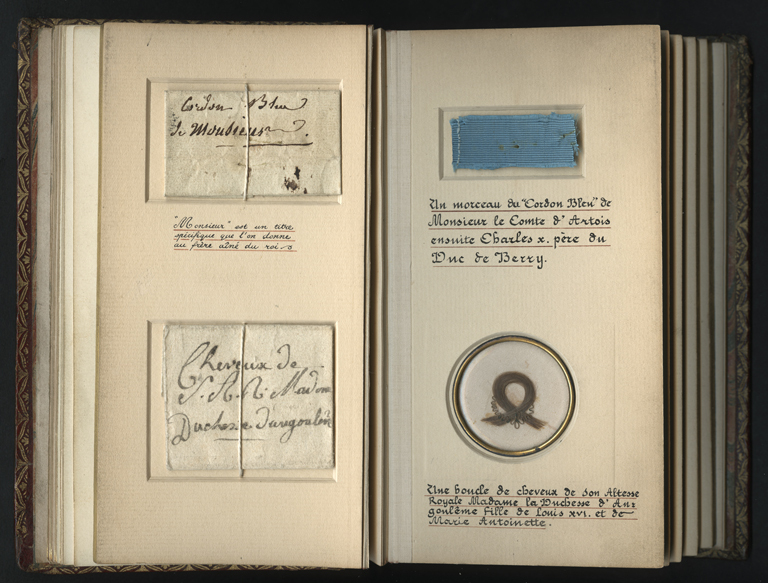 This unusual book contains mementos from the Royal Bourbon Family. Within these pages, the reader will come across carefully preserved locks of hair from certain members of the Bourbon family. Often a nostalgic practice for parents to remember their children, the practice of preserving hair as a keepsake hints at the powerful link between hair and identity. Locks of human hair have long been objects of fascination. Though many of these mementos are explicitly nostalgic, there is a subtle eroticism associated with the act of preserving female hair. Capturing a lock of female hair could be considered an effort to eternally preserve and arrest the sensuality of women. In Alexander Pope’s poem “The Rape of the Lock,” the removal of the lock of hair symbolizes the possession of the woman herself. This book contains a collection of hair from the Bourbon family and represents a festishization of objects belonging to the last line of French kings. Amongst these souvenirs, there is a lock of hair from the Duchesse of Angoulême, the daughter of Louis XVI and Marie-Antoinette. 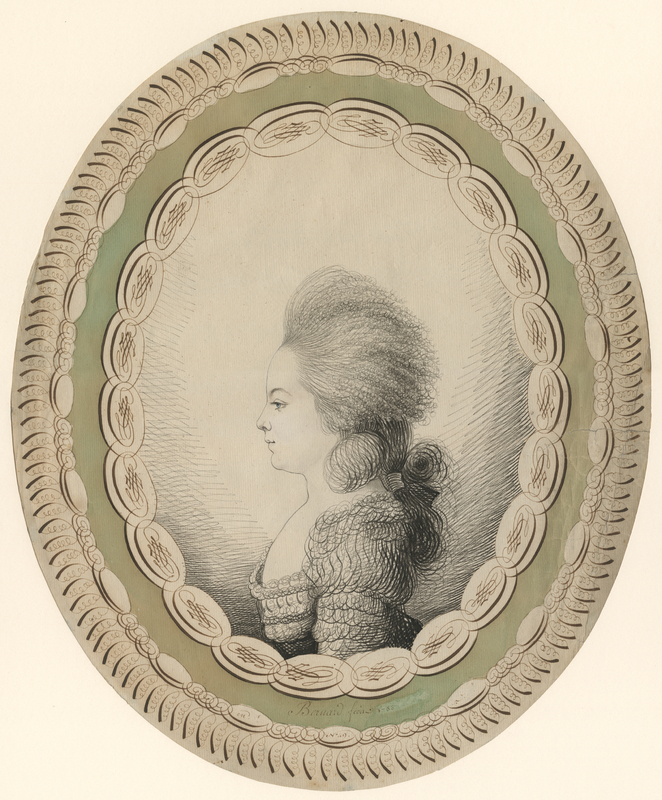 Jean Joseph Bernard, Portrait of a Young Woman in Profile

This evocative watercolor portrait by Jean-Joseph Bernard from the 18th century depicts the profile of a young woman, specifically drawing attention to the over-abundance of her carefully coiffed hair. The soft curls of her locks are evocative of the supple curves of the female figure. Echoes of this sensuality can be seen in the curving lines of her dress and the play of shadow behind her. As evidenced in this portrait, female hair is emblematic of female sensuality. In its imitation of the curving female form, the young lady’s stylishly coiffed curls subtly promises a pleasurable viewing experience for the viewer who remains transfixed by this display of feminine beauty.