Making an Impression: The Book’s Trajectory from the Printing Press to a Private Collection

The Encyclopédie exhibits the processes of the moveable type of a printing press. One book talks about assembling an excellent collection of books, another contains several books bound together, and another reflects upon and defines the meaning of literature of the century. Book-making, printing, and reading were intimate, hands-on processes.

Bonnie Griffin, a graduate student in Hanna Roman’s spring 2016 “Rethinking the Enlightenment French Novel” class, examines the physical composition/materiality of eighteenth-century books in the Morris Wachs Collection. Drawn to the exquisite marbled papers in the Wachs books, Bonnie talks about how the books’ forms tell us much about the book as an intellectual and social tool and the role of literature in society. 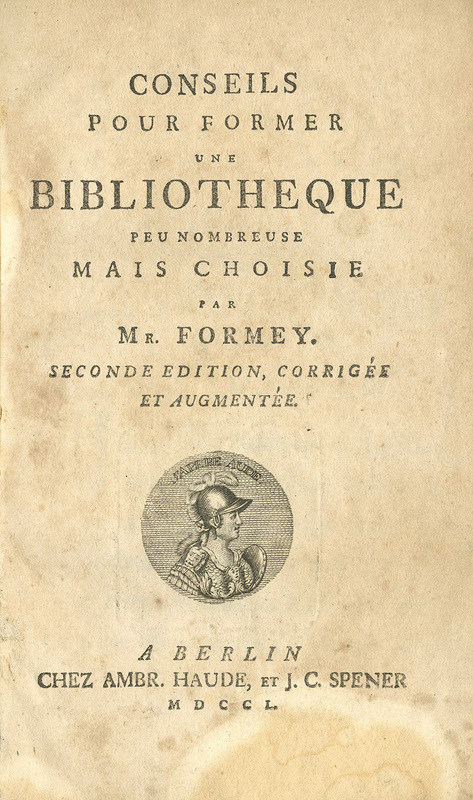 Advice on Assembling a Small, Yet Well-Chosen Library, reads the title of this seemingly unassuming leather-bound book. In other words, this book reveals how to put together respectable library without financially ruining oneself, as books were quite expensive- even those without elaborate decorations like marbled endpapers, and gold-embossed bindings. This slim, yet dense manual is divided into twelve different sections dictating essential elements for a tasteful library, and can be translated as such: 1. Holy Scriptures, Theology, and Ecclesiastical History, 2. Philosophy, 3. Literature, 4. Newspapers, 5. History, 6. Novels, 7. Poetry, 8. Eloquence, 9. Morality and Taste 10. Military Science and Mathematics 11. Geography and Travels, 12. Jurisprudence Medicene. This list is highly revelatory of key priorities among intellectuals (or those who wished to appear as such) of the time; to appear to be well-rounded in numerous subjects pertaining both to what we consider as “the sciences” and “the humanities,” and to possess diverse forms of writings; such as prose, articles, poetry, and religious texts. Written by philosopher Johann Heinrich Samuel Formey, this book represents a reputed authority on the accumulation of books and knowledge. 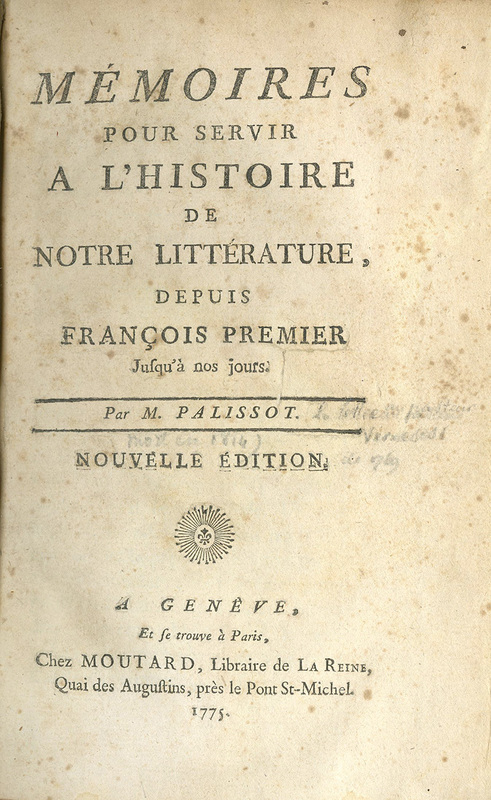 This relatively hefty and stately leather-bound book distances itself from the texts in this exhibition in that it is self-reflective. Written toward the end of the 18th century, this text provides an introspective and nostalgic look back upon the literature of the 17th and 18th centuries. The title, Memoirs of the History of Our Literature, from François the First until Today, cites the “who’s-who” of French letters. Much like contemporary literary reviews or book clubs, this book claims to be an authority on what literature was, informing the discerning reader on who the greatest authors were, with accompanying miniature bibliographies. But beware: The books in this volume, and indeed the books considered to be “canonical” today are not necessarily the ones listed here nor the most popular ones among certain Enlightenment readerships! 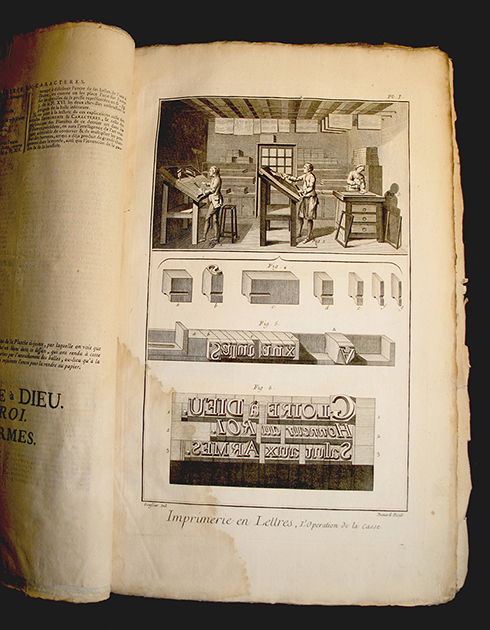 This volume is from Denis Diderot and Jean le Rond D’Alemberts’ famous Enlightenment work, the Encyclopedia, a collaborative project that called upon the expertise of many of the famous philosophers of the time such as Voltaire, Rousseau, and Montesquieu. It spans eighteen volumes of text, eleven volumes of images, and more than twenty years of work. This large-scale, folio edition of the text may be set in contrast from many of the other, relatively small, works in this exhibition because it would have been very expensive and time-consuming to produce--especially this plate volume, with all of its inset gravures. It would have cost more and have been read by a more limited public than the other works you will see. The image shown on these pages, however, reveals the widespread technology of the printing press, so crucial to the production and dissemination of all of these works. The mirror image of the moveable type, seen on the two facing sides of the page here evokes the idea of touch, so key to this exhibit. The press makes an inverted physical impression when it touches the paper. When the book is closed, the two images, text and technology, come together as one. 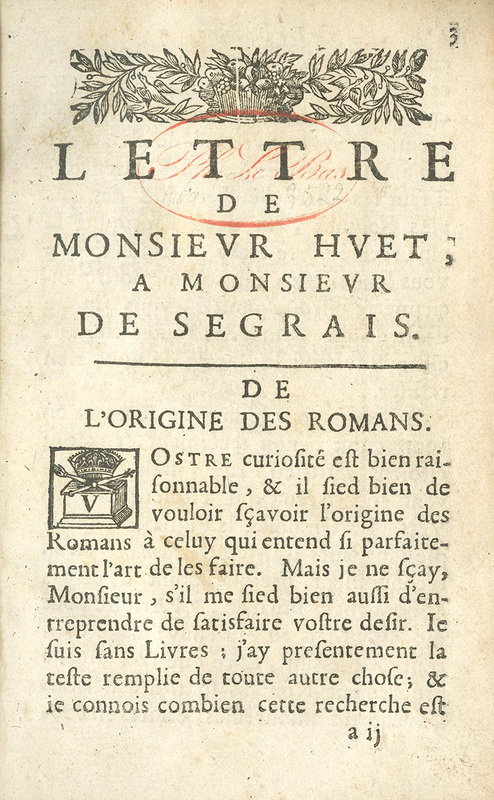 This seemingly diminutive book is deceptively well-endowed with stories. Although it appears to just be one book, the simply-decorated binding actually encases smaller books, which leads us to question what exactly a “book” was in this time period. At the time, the printing binding processes occurred separately, so the customer could purchase several tales, letters, or any sort of writings, and have them all bound together, if he or she so chose. This book contains three well-known titles from the time: the Letter from Mr. Huet to Mr. de Segrais (On the Origin of Novels); Turkish Letters, and An Essay of New Fables Dedicated to the King (Followed by Various Poems and an Epistle on the Progress of Printing. Considering the seemingly random assortment of titles that the consumer would have chosen to bind together, take a moment to puzzle over the agency that readers had in custom-making their own books and collections, in contrast to the way books are published and the composition of personal libraries today.

← Touching the Text: Reading Pleasure in the 18th Century
About this Exhibit →
Home
Making an Impression: The Book’s Trajectory from the Printing Press to a Private Collection