"For the Glory of God"

Medieval theology students spent four years just studying an increasingly standardized Bible. The printing press brought the Christian scripture within reach of almost everyone. Artists today deviate from conventional methods of interpreting the Bible, choosing instead to focus on one biblical book or character, or offer a new vision of the complete text.

In a time without printers, computers, or modern technology, a scribe spent hundreds of hours perfecting a holy book. One book was painstakingly specialized and developed, from the ink to the vellum, to the intricate hand-written text and illustrations. And yet without the modern luxury of mass production, these manuscripts were highly prized commodities and essential for students of theology. This particular leaf from a student Bible contains chapters from the Book of Isaiah, one of the latter prophets, whose martyrdom is shown in the historiated initial. The book begins with the discussion of judgment, in which Jerusalem is punished and cleansed of sin, before the promise of its restored greatness is fulfilled.

During a dark time in history, when many had lost their way, God chose to send down an angel to inform the Virgin Mary that she would bear the son of God. While most modern editions of the Bible are simply mass-produced words on a page, Barry Moser chose to take the production a step further, with the addition of illustrations that reflect the dark era of the time before Jesus.  This book is the only major edition of the Bible since the 19th century to be illustrated by a single artist. The handmade paper and vellum binding, specially created typefaces, and traditional wood-block engraving techniques, combine the old and the new. 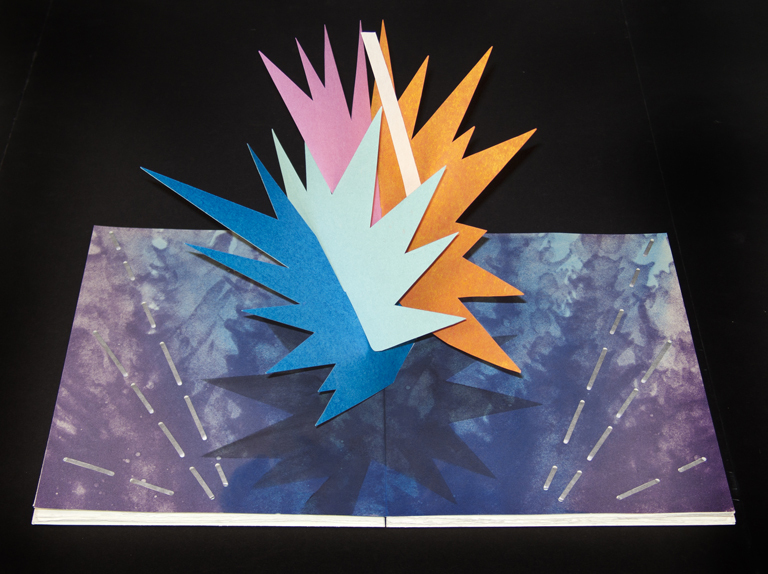 While the Gospel of Mary was written a century after the death of Jesus, it was lost to the English-speaking world until the 19th century. During that time, Mary Magdalene’s contributions were undermined and tarnished by rumors of her former sins.  This edition of her Gospel includes a commentary by Rosemary Radford Ruether, a noted Christian feminist theologian. The artist, Claire Van Vliet, paints with colored pulp (cellulose fibers separated from wood) on paper. This process, called pulp painting, creates an ethereal, celestial effect in which the colors of the image blend seamlessly with the paper. 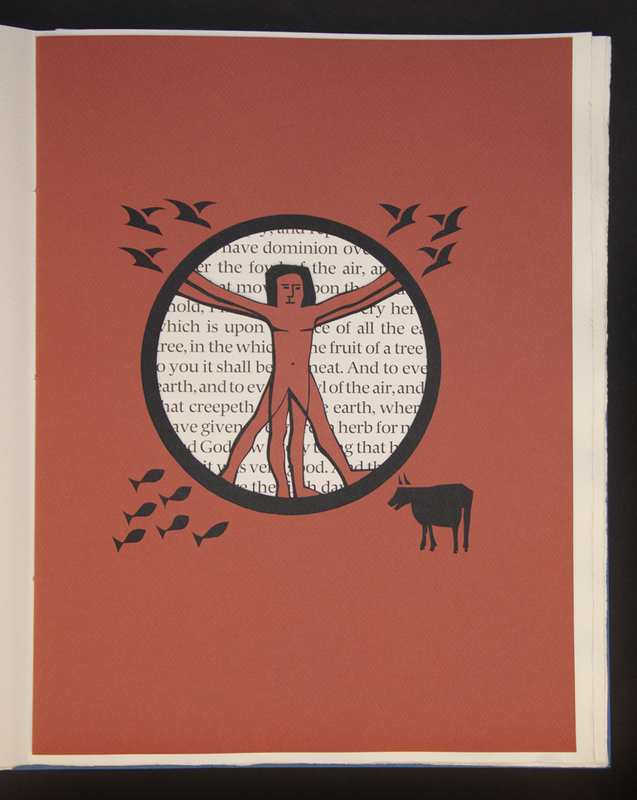 The six-day creation of the universe all began with “In the beginning God created the heavens and the earth” (Genesis 1:1). The first day, he created the night and the day. The second day, he created the sky, a separation between heaven and earth. The third day, he created seas, land, and vegetation. On the fourth day, the sun and the moon appeared. On the fifth day, the seas were filled with fish and the sky with birds. The sixth day, he put every kind of animal life, including humans made in his image, onto the land. Christianity is not alone in explaining the creation of the world, and how things came to be.  This book devotes one quire to each day of Creation, illustrating each day’s achievements with colored paper, silkscreen, and simple geometric cut outs.

Aldrich’s poem celebrates Friar Jerome, who creates a beautiful Holy Book as an act of repentance.  And this was a beautiful book indeed, with careful handwritten script, beautiful illuminations along the border of swirling leaves and capitals, strikingly realistic illustrations filled with blues, reds, purples, and the most impressive of all: gold. In this illustration, Friar Jerome is seen laboriously illuminating and creating his manuscript Bible, before the plague ended his work. While books made by hand were much more common in Friar Jerome’s time, in the 13th century, artists like Alberto Sangorski still chose to emulate this traditional art. Much like Friar Jerome, Sangorski must have spent countless days and thoughts on this piece; but the effort shows, in his own beautiful book.