Word & Image: The Role and Impact of Script

The title of this display stems from W.J.T. Mitchell’s essay “Word and Image,” in which he considers “the relation between the seeable and the sayable, display and discourse, showing and telling.” Artists and craftsmen both past and present have used letterforms to merge word and image, forming a new composite experience.

The Art of the Book: The Role and Impact of Script

The Art of the Book: The Role and Impact of Script
April 25, 2016
Speaker: Mary Helen Johns
Vanderbilt University

Mary Helen Johns, an undergraduate in Professor Elizabeth Moodey’s spring 2016 Art of the Book class, speaks here about how her interest in the relationship between art history and literary theory and how that drew her to the topic of art and text. She notes that the class taught her about curatorial interpretation and she draws connections between her topic and the way curators interpret art and text. 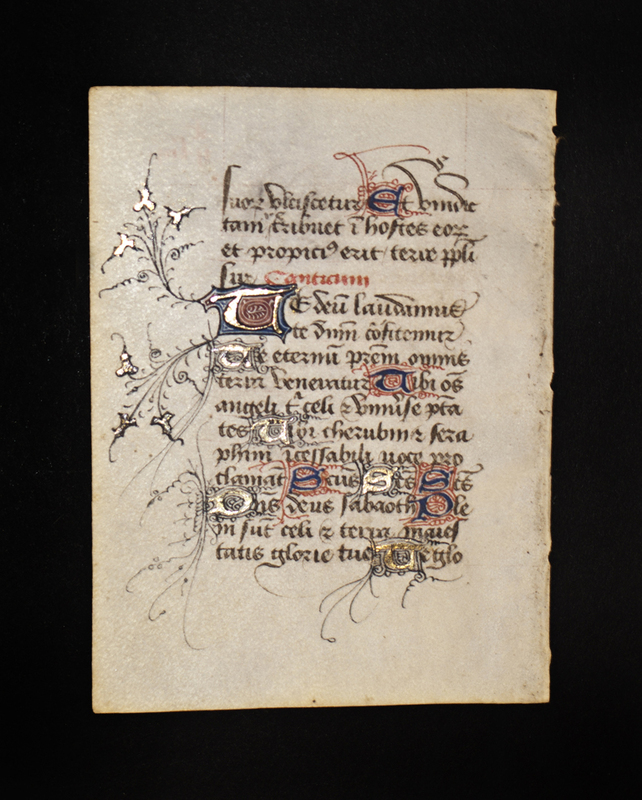 The Te Deum, recorded on this small 15th century leaf, is an Early Christian hymn of praise written in Latin. Medieval legend held that this canticle was improvised by St. Ambrose and St. Augustine at the latter’s baptism. A part of the Liturgy of the Hours, the Te Deum was commonly included in the personal prayer books known as books of hours, which were arguably the most popular book of the time. If an ordinary person owned only one book, it was likely a book of hours. The Te Deum on this particular leaf begins with a large, illuminated initial, containing an enviable amount of gold leaf despite its modest design and small size. 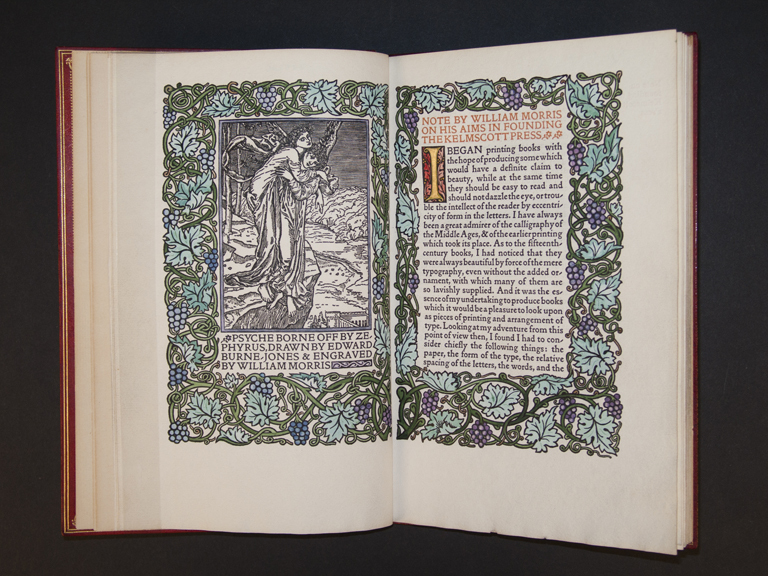 The Art and Craft of Printing

William Morris was a 19th century English writer, socialist, and proponent of the Arts and Crafts movement. A romantic and champion of medievalism, Morris founded the Kelmscott Press in 1891 for the purpose of printing illuminated books in the medieval style. Morris believed that beauty could be found in the form and layout of medieval texts, which he sought to duplicate in the 66 volumes that he brought to print. This book, with its intricate borders and complex prints, provokes the reader to question modern standards of bookmaking. 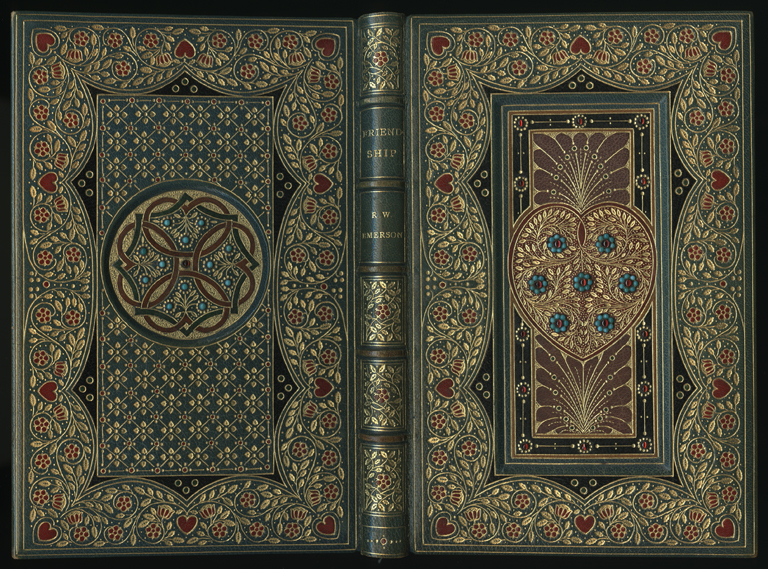 Ralph Waldo Emerson was one of the foremost American poets and philosophers of the early 19th century. A proponent of the transcendentalist movement, Emerson believed that people are inherently good and virtuous until corrupted by society’s constructions. This conviction extended to the idea of friendship, which Emerson believed to be man’s most noble pursuit and greatest gift. Emerson was profoundly shaped by friendships with Thomas Carlyle and Henry Thoreau. In this poetic opening to Friendship, Emerson describes the ebb and flow of friendships and the lessons that we learn from them. The illumination and jeweled binding of the text, created by the London firm Sangorski & Sutcliffe, elevate the meaning of the text and mirror the importance of its message to Emerson himself.

“A Scribe of Kloster Eibingen”

The title of this silkscreened poem can be translated as “Eibingen Abbey,” a community of nuns in Germany founded by Hildegard of Bingen in the year 1165. A musician, scientist, and poet, Hildegard actually created her own secret language entitled Lingua Ignota, based on Latin but using an invented alphabet. The falling letters depicted in the illustration are actually from this language, and the metaphor within the poem describes the ephemeral nature of language and the mysterious elegance of the written word. 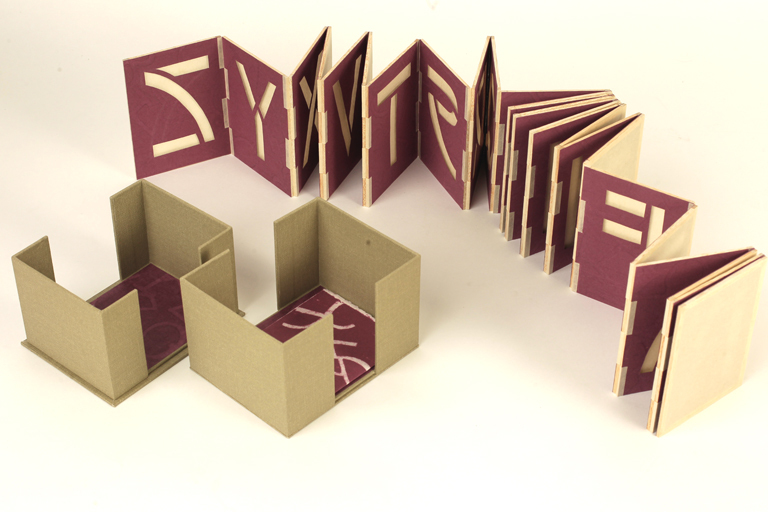 Helen Hiebert is a sculptor, bookmaker, and author who uses paper, light, and thread to create unique forms. She has said of her work, “I’m fascinated by the transformation of paper from two into three dimensions and the many ways that it can make that transformation.” In Alpha, Beta Hiebert combines paper and Japanese hinges to form a shadow lantern, exploring the sculptural quality of the letters in the alphabet through the relationship between image and light. The font used in the piece, called Arts and Crafts, was designed by Dard Hunter, the father of modern handmade papermaking.

Barry Moser is an author, illustrator, printer, and founder of the Pennyroyal Press. Because he occupies all of these roles, Moser prefers to call himself a “bookmaker” rather than an illustrator or author. When creating a book, Moser is involved in every aspect of its making, which is apparent in the cohesive nature of An Alphabet. Letters of the alphabet are written in calligraphy, and paired with a word beginning with that letter. Each word is then represented on the following page by an engraved image, many of which are comical in nature. For example, H is for hogwash, represented by Ronald Reagan. The opening presented here is M for misericord, a small seat used by medieval monks during long prayer sessions. However, the image depicted is a misericorde, a weapon used by knights to deliver a mercy stroke.