From the scribe who wrote out the text, to the illuminator who decorated the leaves, to the binder who covered the finished book, making a medieval manuscript was a coordinated effort.  Scribes and illuminators used vellum, gold leaf, and pigments from as far away as Afghanistan to make these coveted objects.

The Art of the Book: Making a Medieval Manuscript

Danielle Pettiti, an undergraduate in Professor Elizabeth Moodey’s spring 2016 Art of the Book class, describes the way illuminated manuscripts were created in the medieval period. Pettiti notes that her favorite part of the class was “decoding” her illuminated manuscript, which she compares to finding the pieces of a puzzle. 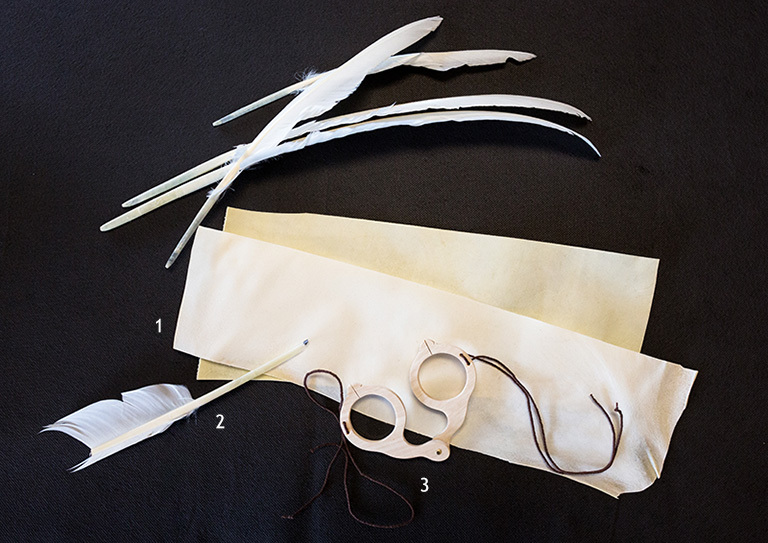 The process of making a medieval manuscript was quite involved, requiring multiple stages. The first was writing. Most of the finer-quality manuscripts were written on vellum, which was made from calf skin, rather than on the skin of another animal.  Vellum makers would first soak the calf hide in a lime solution to remove any hairs or flesh, and place it on a stretcher for scraping into the required thickness.  Once dried, vellum was cut into sheets that were used to make folios, or the main pages of a book. A scribe would then write on the vellum with a quill pen made from the feather of a goose or swan. The end of the feather was cut at an angle to form the writing nib, and was slit down the middle for ink to flow smoothly. The invention of eyeglasses in the 13th century made it possible for scribes to write and see tiny scripts and fine details of illuminated manuscripts, and would have helped older scholars with their fading eyesight. 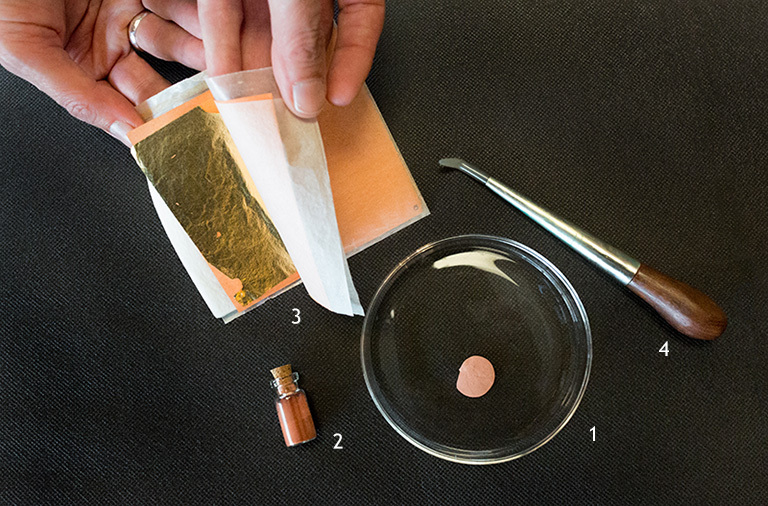 The second stage of manuscript making was the gilding stage. At this point in the process, an illuminator would apply gesso to the vellum page to provide a supporting base for the gold leaf favored for initials to create the impression of three-dimensional solid gold. A red clay known as Armenian bole was sometimes added to the gesso, giving it greater warmth and luster, and making otherwise white gesso easier to see against the vellum. These compounds are what made medieval manuscripts illuminated, meaning they containing gold or silver, which reflect light. Medieval illustrators would traditionally use a dog’s tooth mounted on a handle to shine the newly applied leaf, while modern artists prefer an agate burnisher.

During the painting process, it was common for illuminators to store pigments inside shells from a mussel or clam, including powdered gold, hence the name “shell gold.”  The powdered pigments were blended with water and egg white or gum Arabic. Colors included mineral pigments such as malachite (bright green), azurite and lapis lazuli (blue) or Earth pigments such yellow or red ochre that trace back to ancient times of cave painting.  Chemical and organic pigments were also used. Shell gold was added over the paint in a later stage of illumination. Gold was expensive, thus was primarily used for creating meticulous accents in small and complex designs. 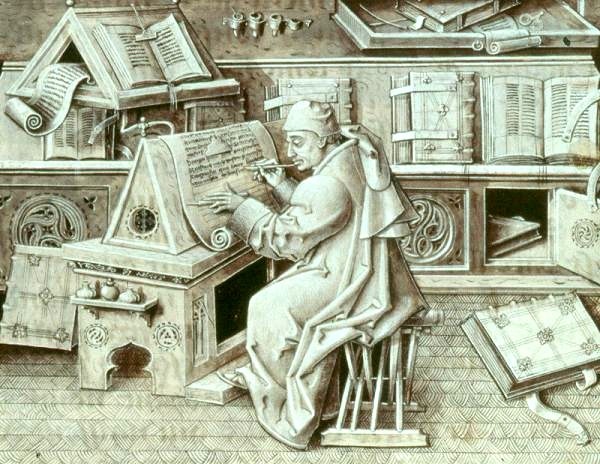 “Jean Mielot in his Study”

Jean Mièlot was a renowned scribe, author, translator, and manuscript illuminator of the 15th century who served as secretary to Philip the Good, Duke of Burgundy. This portrait of Mielot in his study shows him writing his compilation of the Miracles of Our Lady, one of his many popular works. Included in the image are some of the materials he would have used, which provide scholars with a better understanding of the techniques involved in making a manuscript.  Specifically, the portrait depicts Mielot using objects such as a wooden lectern for support, a knife for correcting, bullhorns for storing ink (suspended from the wall), and in the upper right corner, a pair of spectacles. 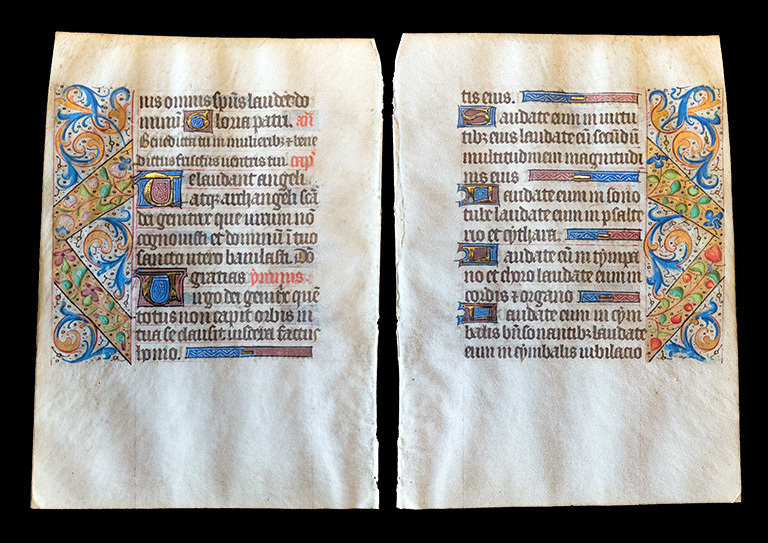 [Leaf from a Book of Hours]

Books of Hours are Christian devotional books popular in the Middle Ages that varied widely depending on the date and place of their production.  These hand-held books evolved out of the monastic cycle of prayer which divided the day into eight segments, or “hours” and were designed to be used privately by individuals. This 15th-century leaf in particular is from the Hours of the Virgin. Its text, written in Latin, specifically includes a prayer from Psalms 150.  The leaf’s unique marginalia, illumination and script provide us with insight as to its own history and origins.