Because our memories are frustratingly intangible and fleeting, we long to associate them with physical objects in hopes of preventing them from fading.  In these examples, artists seek to preserve the conclusions of a scholar, commemorate an event, and sanctify a place.

The Art of the Book: Memory

Rebekah Smith, an undergraduate in Professor Elizabeth Moodey’s spring 2016 Art of the Book class, discusses the role of memory as envisioned in medieval texts and contemporary artists’ books. Smith tells us why she selected each object, what they mean to her, and why the class project was particularly meaningful to her. 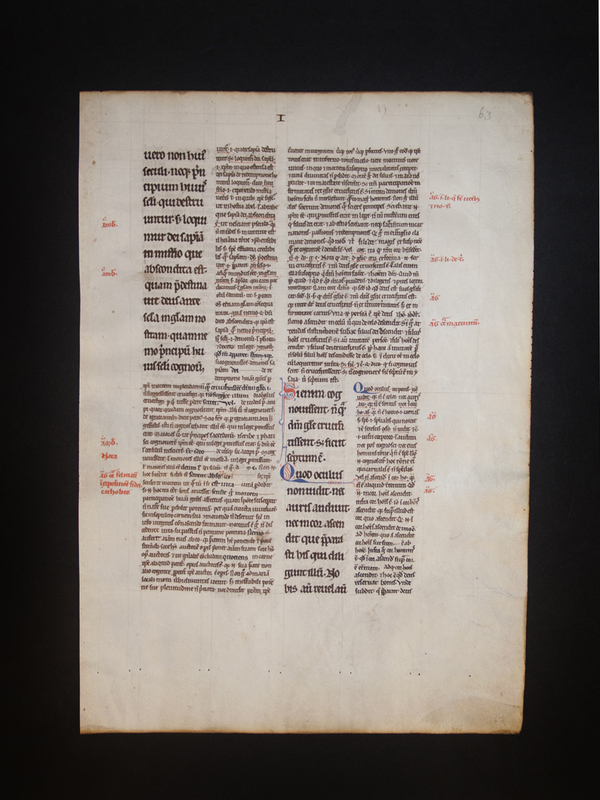 [Commentary on the Bible]

This medieval manuscript is a leaf from Peter Lombard’s Sententiae. Writing in the 12th century, Lombard was one of the first theologians to combine commentary from other scholars alongside the Biblical text they discuss. The Bible passages are written in larger script with intermittent initials and flourishing, while the commentary is written in less decorative, smaller script. The Sententiae played a profound role in the development of later theologians, including Church Doctors such as Saint Thomas Aquinas and Saint Bonaventure, and became the standard text for theological study in the late Middle Ages.  This particular leaf presents text from 1 Corinthians 2:6-10, with commentary from scholars including Saint Augustine and Saint Ambrose written alongside. The piece exemplifies the way scholars are remembered by their works, both in Lombard’s use of other theologian’s writings, and in later use of Lombard’s own text for theological study. 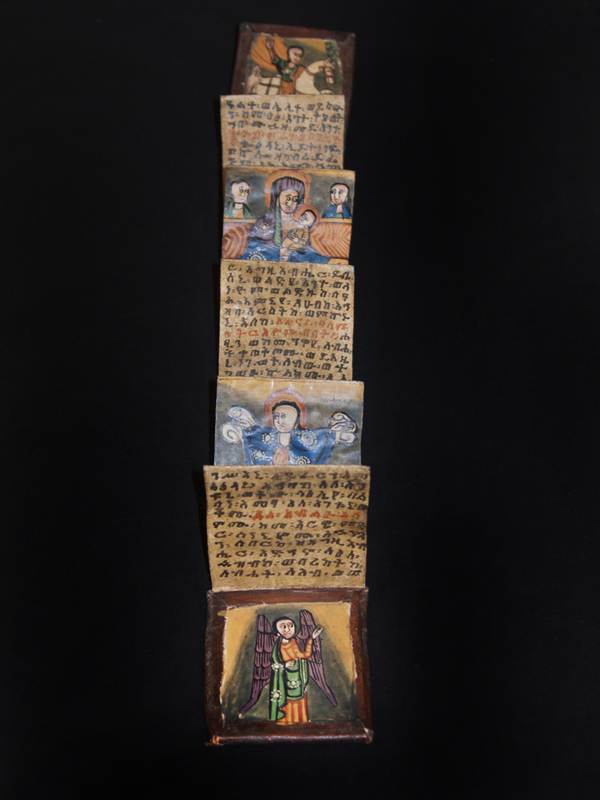 The Ethiopian Prayer Book is an interesting combination of both Christian and pagan traditions.  Such books were intended to serve both as Christian prayer books and as way to connect one with the spirits.  Often referred to as ‘Magic Scrolls,’ they were folded up and carried throughout the day and then unfolded and hung on the wall at night. The language on the scroll is Ge’ez, which is today only used in the liturgy of the Ethiopian Church. The images depict various Biblical figures and saints, including Saint George slaying the dragon in the first image, and the Virgin Mary holding the infant Jesus in the second image. This scroll exemplifies how religion is remembered and plays a fundamental role in everyday life.  It works to take the intangible ideas of religion and spirituality and capture them in a concrete and physical form, which can be kept on one’s person at all times. 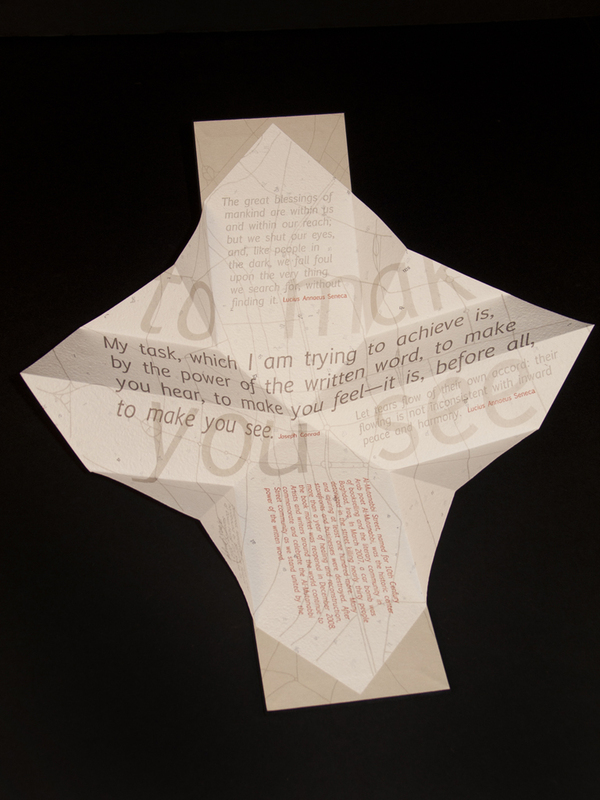 [To Make You See]

To Make You See, by Suzanne Sawyer, exemplifies how people struggle to commemorate tragedies. The piece combines quotes from Lucius Annaeus Seneca, a first century Roman philosopher, and Joseph Conrad (1857-1924), a British writer. The two authors discuss the need to open our eyes – to see – in order to achieve peace. Sawyer created this piece to commemorate a 2007 car bombing in Baghdad, Iraq, which destroyed a part of the city celebrated for its literary culture. She places the quotes over a map of the area, emphasizing her hope that peace will be restored if only she can use “the written word… to make you see.” The piece brings up questions of how such tragedies should be remembered. Should the focus be placed on those who lost their lives? Or on moving forward and working to prevent such a tragedy from occurring again? 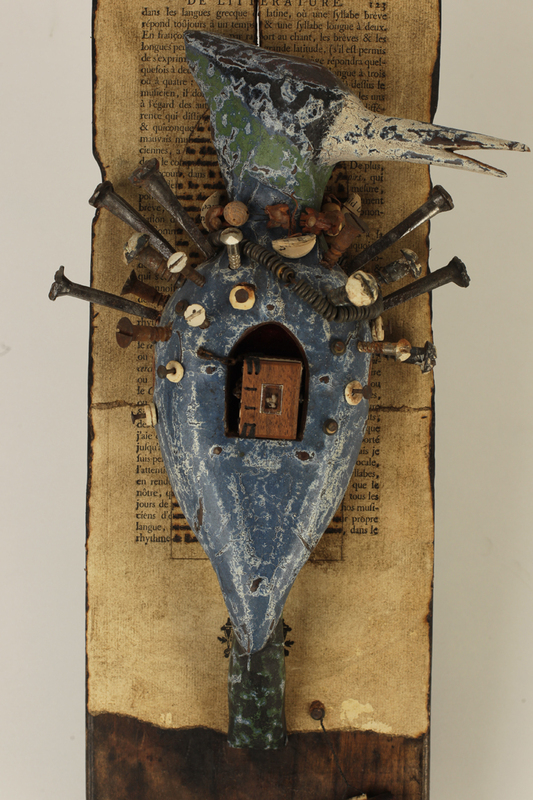 Daniel Essig’s Horn BookFisher combines various elements from different cultures and time periods. The wooden panel with pages from a French book pasted onto it is meant to be a hornbook. This was an object commonly used from the 15th to 18th centuries to help school children learn the alphabet and their prayers, and would have been carried with them everywhere. The statue of a blue bird is modeled after the Kingfisher bird, and the nails in the bird represent the African tradition of Nkisi Nkondi figures, which held spiritual energy. The nails would be driven into the figure to symbolize the sealing of an oath, the need for protection, or to hold onto the spirit’s power. The central area of these figures was considered the place where the spirit was kept. In Essig’s work, this place is occupied by a book chained to the bird, perhaps to protect the form of the book and maintain its importance in education and memory. 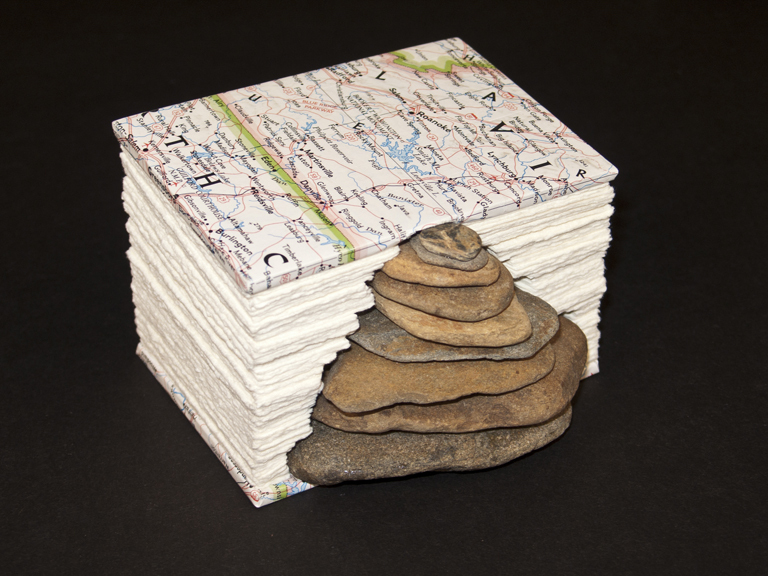 Cairn for my Daughter

Lyall Harris created Cairn for My Daughter to have a physical reminder of the cabin in rural Virginia, where she spent much of her childhood. After visiting the cabin, built by her grandfather in 1950, with both her parents and her daughter, Harris states that “I fully felt the finite quality of my time with my parents and my daughter, the inevitable ruin of the house itself. And yet, collecting the small, flat stones with my daughter, I also sensed the continuum: the four generations of our family that have been there, the persistence of the creek, the history of the landscape and the rocks.” The cairn of stones, bound in a map of the area, commemorates both the physical location and the generations who have spent time there, and will continue to do so. The pages surrounding the cairn are left blank, implying that there are many memories left to be made there.

← Travel
Medicine and The Evolving Understanding of the Body →
Home
Memory