Traditionally, book artists have represented music only in the form of written notation. Even the splendid antiphonaries created by medieval monks were merely guides to performance. However today, many artists find inspiration in challenging our conception of what constitutes music and looking for it in the everyday.

The Art of the Book: Music

Sharon Si, an undergraduate in Professor Elizabeth Moodey’s spring 2016 Art of the Book class, presents on her curation of this music exhibit. As a musician, Si was particularly interested in the way our understanding of music has evolved since the medieval period.  During her class, she reached out to Lesley Patterson-Marx, a book artist living in Nashville, to learn more about the artist’s interpretation of music in contemporary form.

Antiphonary refers to any Christian musical text where there is a call-and-response between the choir and the soloist. This leaf contains the hymn “Aeterne rerum conditor” or “Eternal Creator of All” written by St. Ambrose in the 4th century. The large size of the leaf suggests that it was not created until after the 1400s although the script and notation resemble antiphonary leaves from late 15th century Italy. As was common in medieval times, the notes represented on the staff are not fixed. The location of C, the point of references for which all other notes are determined, changes each line and is determined by the placement of the “C” at the beginning of each staff line. The music is written in square notation, which began emerging as the default notation in the 13th century. 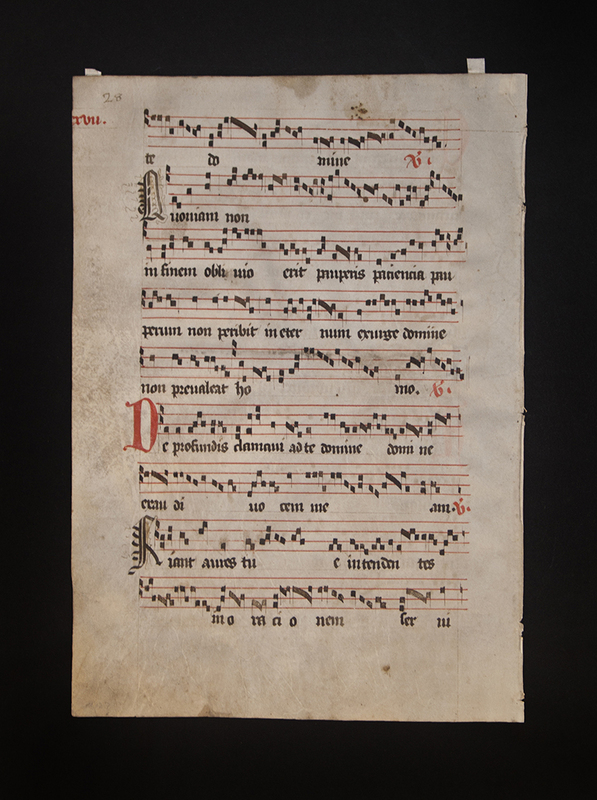 The decoration of the initials on this leaf is simple and the Gothic script is easier to read, suggesting that it was taken from a Missal, a liturgical book that contained the instructions and chants necessary to celebrate Mass.  This particular Psalm, “De Profundis” or “From the Depths,” seems to be the tract taken from the Septuagesima Sunday in the Temporal Cycle, used when the Alleluia was deemed to be too joyful. Moreover, on the recto of the leaf, there have been multiple changes made to the prayer. In the 15th century, someone crossed out the original prayer and replaced it with the one written on the right-hand margin; it contains cues, but not the full text of the prayer. A 16th century hand decided that the cues were not enough and wrote over the original prayer, completely destroying what had been there. Still unhappy with the legibility of the prayer, an even later 17th century hand simply rewrote the prayer along the bottom margin of the leaf. 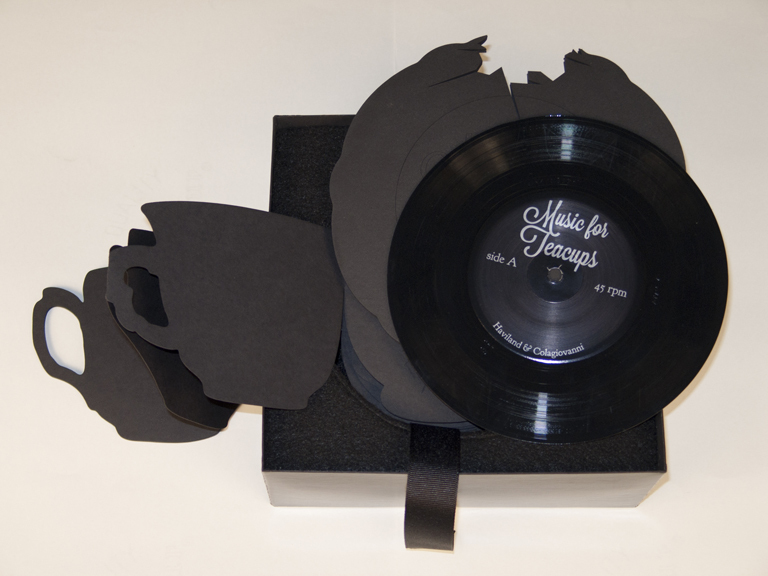 Haviland’s Music for Teacups truly questions our definition of music. Smashing teacups, usually considered an act of clumsiness, makes a bell-like sound when isolated and timed at certain speeds and creates music when repeated. Technology renders the vinyl record, a medium more traditionally associated with music, obsolete. By choosing to break teacups, Haviland’s work focuses on class, femininity, and etiquette. Teacups are a particularly forceful reminder of traditional, western female gender roles, and smashing them to create music represents a literal destruction of stereotypes. The artist’s book component to this piece is a black, accordion-fold structure of cutout paper teacups. Given the black material, it is difficult to identify the jagged edges that connect the teacups, which represent the simultaneously unique but shared experiences of different women.

With its accordion-style binding made of Mylar and portions of sheet music from the 1945 song “Till the End of Time,” Butterfly Harmonica Book challenges the traditional notions of book and music. The deliberate fragmentation of the sheet music renders the song identifiable but unplayable; it is broken up into chunks and provides incomplete information to the reader. Similarly, while the harmonica is easily recognized as an instrument, Patterson-Marx has “broken” its ability to produce music by adding in the accordion fold. Much of the artist’s work finds inspiration in the ephemeral qualities of the found objects that she works with and the interconnectedness of things; there is a history to all objects that pass through our hands. In this piece, she was inspired by the “Butterfly” brand of harmonica to include black butterfly cutouts. 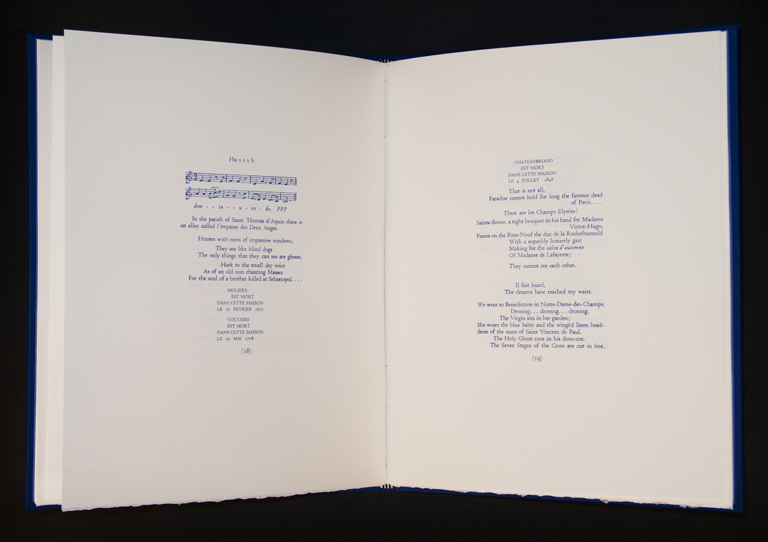 Upon its publication by Leonard and Virginia Woolf at the Hogarth Press in 1919, Mirrlees’s modernist, avant-garde poem gained little traction among contemporaries. Often compared to T.S. Eliot’s “The Wasteland,” the work remains largely overlooked even today. The poem follows the travels of the flaneur, a wanderer who experienced a city by walking through it. It is a highly visual form, and this printing of the poem maintains the original layout. In the stream-of-consciousness spirit of the modernists, the artist’s narrative places snippets of French conversation about Russian literature next to metro ads and references to art, religion, and landmarks in Paris. The flaneur experiences the sounds of the street as music, disjointed and disparate juxtapositions that reveal the true nature of the cosmopolitan city.

← "For the Glory of God"
Word & Image: The Role and Impact of Script →
Home
Music