Relationships, from familial bonds to spiritual connections, are the heart of a woman’s experience and are fundamental in shaping her identity. More than just creative works of art, these books reflect the experiences of medieval and contemporary artists and their readers. 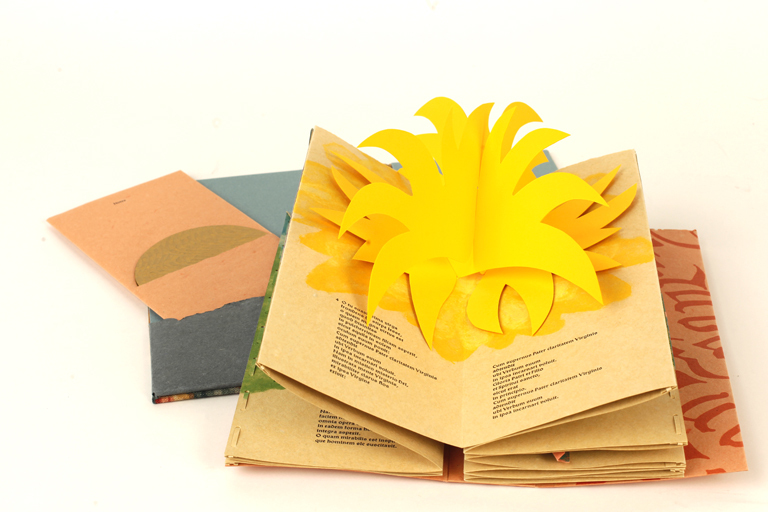 A poet, naturalist, healer, theologian, visionary, and composer, Hildegard von Bingen is a remarkable medieval saint who dedicated her life to studying a variety of disciplines. She is best known for her musical compositions, which are inspired by the mystical visions that she began experiencing at a very young age. Sapientiae (In English, Circle of Wisdom), a contemporary artist’s interpretation of Hildegard’svisions, is a collection of her songs known as the Symphony of the Harmony of Celestial Revelations. Each song, written in the plainchant tradition, is complemented by vibrant cut-out illustrations that visually express her spiritual encounters. Colorful in prose and imbued with deep symbolism, these songs capture Hildegard’s perception of music as central to her faith. A recording of Hildegard’s songs performed by the female music group, Anima, is included with the book. 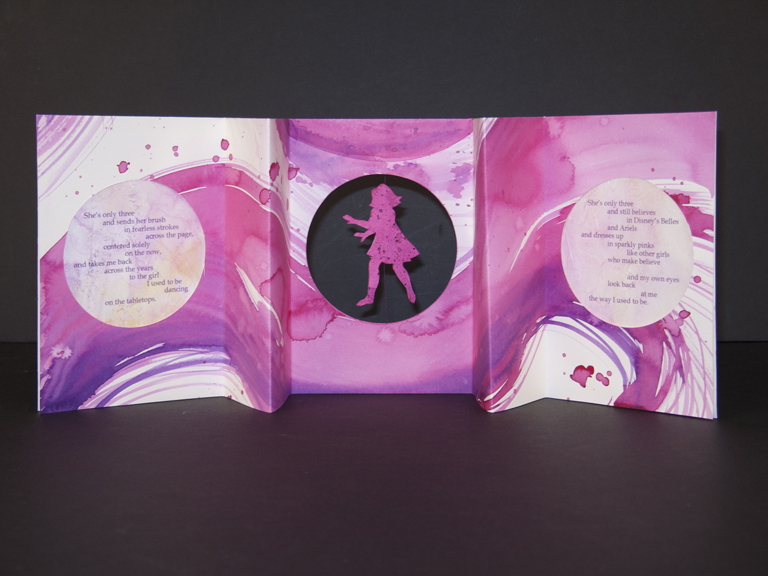 In creating Charlotte, artist Elizabeth Sanford was fascinated with the relationship between past and present. In the two poems that accompany the delicate dancing figure of her young niece, Charlotte, Sanford reflects on her own transformation from childhood to womanhood. Watching the girl as she plays dress-up and idolizes Disney princesses, Sanford is transported to the endless afternoons she once spent dancing playfully and is overcome with a sense of nostalgia. The dancing silhouette, pink and purple brushstrokes, and faint glitter create an aura of whimsy, innocence, and magic that is reminiscent of girlhood. Small and charming, Sanford’s book functions as a commentary on the relationship between our present and our past selves and how we seek to preserve the magic of childhood in the hectic world of adulthood. 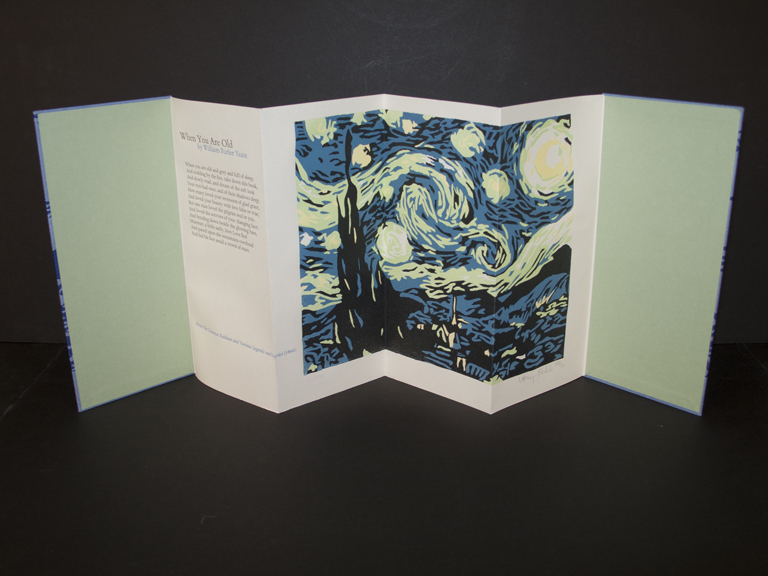 When You Are Old

A favorite of the artist’s, this poem is a young man’s love letter to a woman. In his emotional letter, he asks his loved one to remember him as she ages and reassures her that unlike other men who admired her only for her superficial qualities, he loved her for her true soul.  Upset that she will not return his affections, the man ultimately flees, concealing himself amongst the stars and clouds. Pirkle’s work combines Yeats’ poem with a four-color linoleum block reproduction of Van Gogh’s Starry Night, which conveys the somber yet romantic sentiment of the poem. Her work not only touches on the relationship between men and women but also deals with the connection between word and image and how each strengthens and reinforces the other. 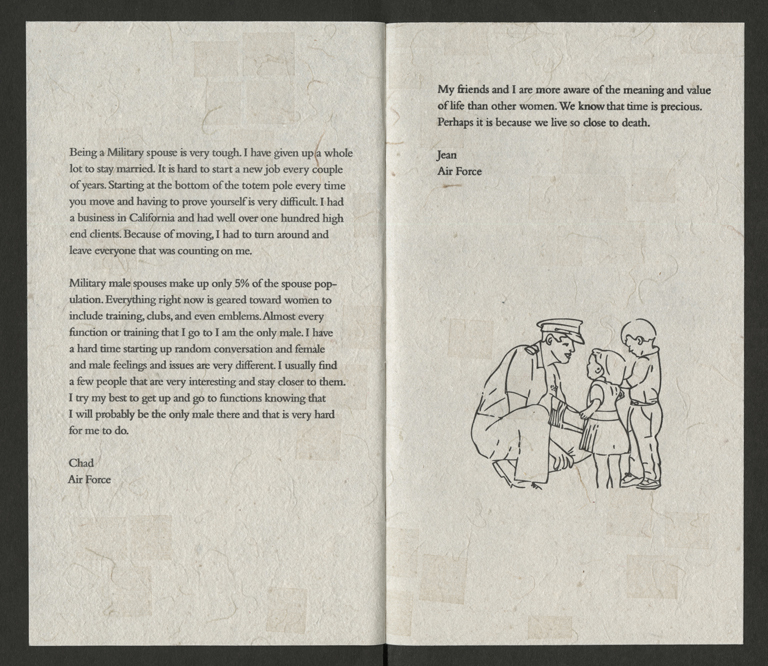 Holding Down the Fort

A collection of poems and written passages dating from 1842 to the present, Holding Down the Fort honors the struggles and joys of life as a military spouse. The works range from short poems to longer paragraphs and address a variety of common themes, such as single-handedly raising children, maintaining long-distance relationships, and constantly uprooting one’s family. While Rossow clearly acknowledges the challenges inherent to life in the military, she also highlights its simple joys. Many writers, for instance, describe the strong bonds they’ve developed with other military spouses and the pride they feel in their partner’s choice to honor and protect their country. Holding Down the Fort showcases the voices of Americans throughout the entire country, yet there is also an autobiographical quality to the work, as Rossow’s own father was in the military and husband currently serves in the Air Force. 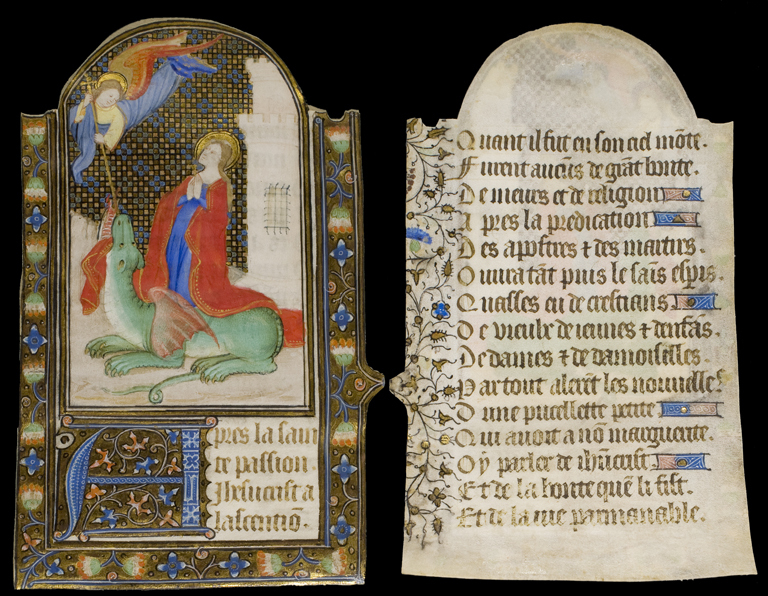 “St. Margaret and the Dragon”

As the patron saint of childbirth, St. Margaret is especially relevant to women’s experience. Born in Antioch, a Roman province known for fierce persecutions against the Church, she was arrested, tortured, and imprisoned at a young age for refusing to denounce her faith. While in prison, St. Margaret was confronted by the devil in the form of a dragon. Unable to tempt her, the dragon disappeared but soon returned and swallowed her. With the sign of the cross, St. Margaret burst forth from the belly of the Dragon, her miraculous survival serving as a metaphor for childbirth. This particular leaf, made in 15thcentury France, is from a French Life of St. Margaret.  The miniature depicts St. Margaret emerging triumphant, her red garment trailing from dragon’s mouth. Above, an angel prepares to slay the dragon with a golden cross. 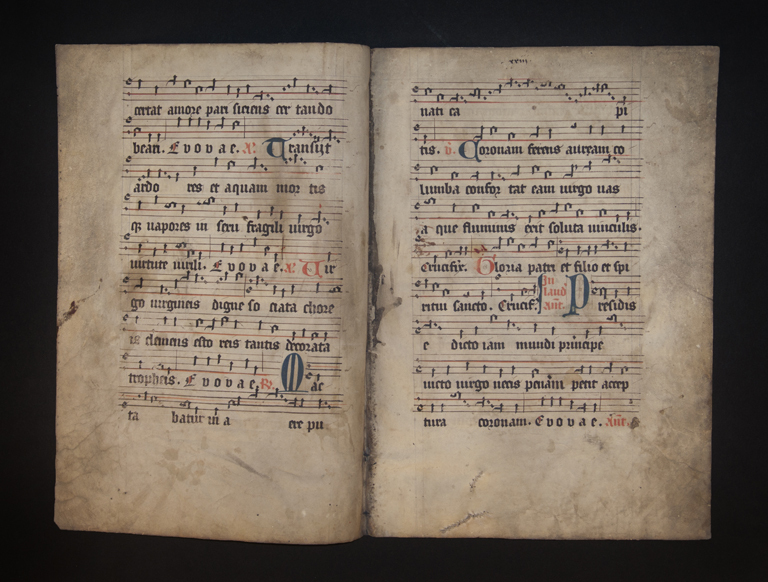 As the patron saint of childbirth, St. Margaret is especially relevant to women’s experience. Born in Antioch, a Roman province known for fierce persecutions against the Church, she was arrested, tortured, and imprisoned at a young age for refusing to denounce her faith. While in prison, St. Margaret was confronted by the devil in the form of a dragon. Unable to tempt her, the dragon disappeared but soon returned and swallowed her. This particular musical composition likely came from a 15th or 16th century choir book, as indicated by the number of antiphons and its smaller size. The musical notes are written in Hoffnagle notation, the standard for the period, and the red line marks the F-pitch.