The Bible in Syriac

Although the New Testament was written in Greek, the Syriac translations of the Old and New Testament (dating to the 2nd century of Christianity) are some of the earliest witnesses to the central role of the Bible in Christianity. Among the surviving work of Syriac authors and scribes are one of the earliest illuminated Bibles and the first attempt at a parallel alignment of the four Gospels. 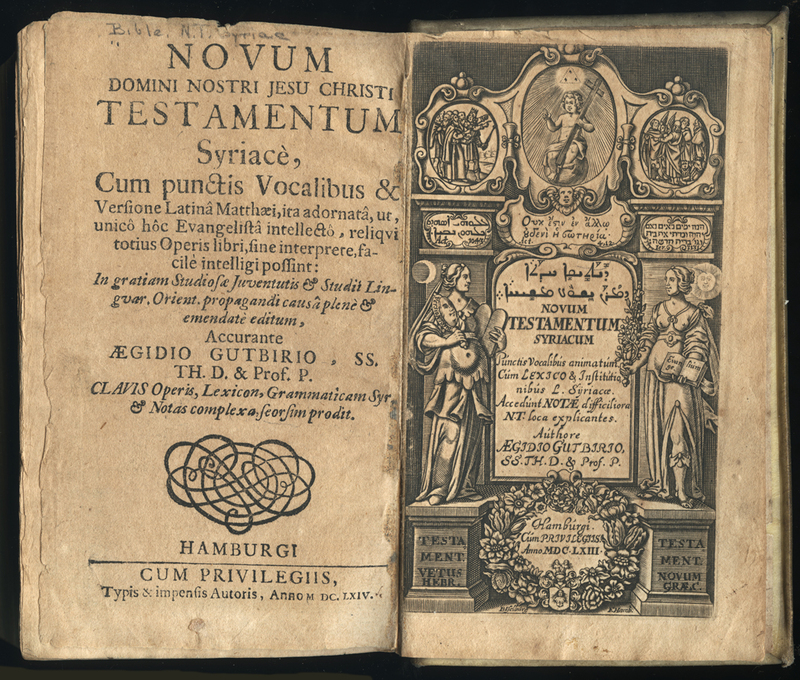 Aegidius Gutbier (1617-1667) was a professor of Oriental languages in Hamburg, Germany and one of the preeminent European scholars of Syriac of the early modern era. Gutbier’s scholarship reflected a Protestant interest in Syriac Christianity as a source for understanding the early Church. His magnum opus was three tools for the study of the New Testament in Syriac: a printed edition of the Syriac New Testament text, a set of study notes, and a dictionary. Because typeface and expertise for printing in Syriac were rare, Gutbier founded his own press in 1664 to print these books. In the version here, the three volumes are bound as one, each with a separate dated title page: part one: Novum domini Nostri Jesu Christi testamentum syriacè (1664) paged from right to left; part two: Notae criticae Novum Testamentum syriacum... (1667), and part three: Lexicon syriacum...(1667), paged left to right.  A Latin translation of St. Matthew’s Gospel is also provided alongside the Syriac. 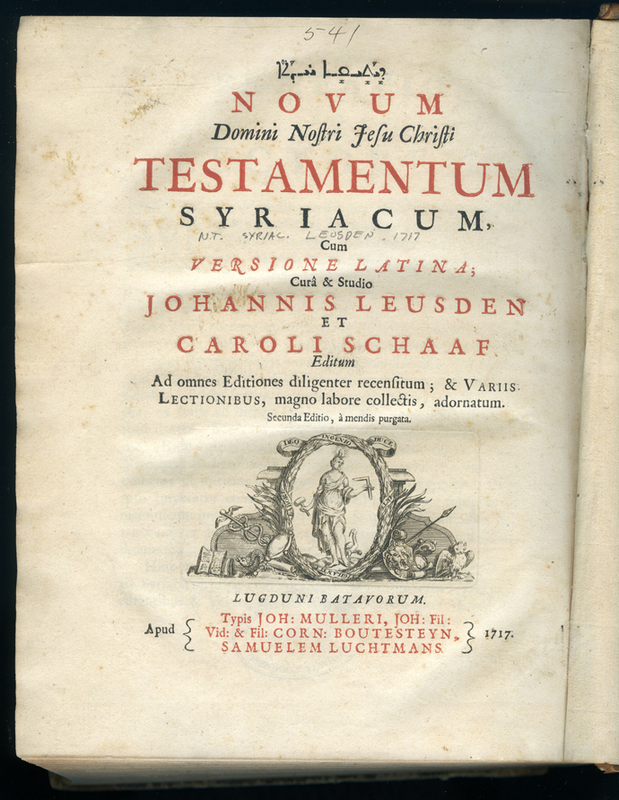 This edition of the Syriac New Testament with a parallel Latin translation (1717) was edited by J. Leusden of Utrecht and C. Schaaf of Leyden, improving on the earlier edition of Aegidius Gutbier. Leusden’s work had only progressed to the middle of St. Luke’s Gospel when he died in 1699, so the rest of the edition was completed by Schaaf with a first printing in 1708 and multiple subsequent printings. These re-printings are notable as one of the earliest uses of stereotyping technology which allowed for multiple print runs of a book without the expense of having to reset the type each time. This edition is also notable for the idiosyncrasy of using two forms of vocalization. As in Hebrew and Arabic, the marking of vowels in Syriac is optional. In this edition the two editors used different ways to mark the vowels, with Leusden’s portion using an East Syriac method but the continuation by Schaaf adopting a Western convention. 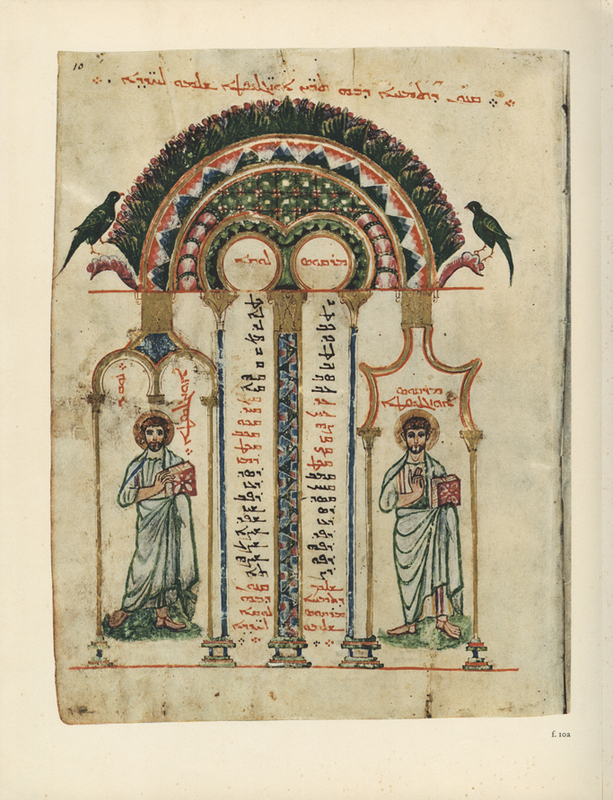 [Canon Table of the Gospels of Mark and Luke from the Rabulla Gospels (A.D. 586)], Evangeliarii Syriaci

The Rabbula Gospels, written in the year A.D. 586, is possibly the earliest surviving illuminated (illustrated) Bible manuscript. It was written by a Syriac scribe, Rabbula, in a monastery near the town of Apamea in Syria. Scholars have long noted the importance of this manuscript for understanding the history of Christian art. This manuscript would have been a large and impressive luxury item at the time of its production. It is nearly 300 folios (pages) in length, with each page approximately 14 in. by 11 in. in dimensions. It contains the four gospels, a section of illuminations, and a complex set of “canon tables” used to align the similar passages from the four Gospels. The canon tables for the Gospels of Mark and Luke are pictured here. 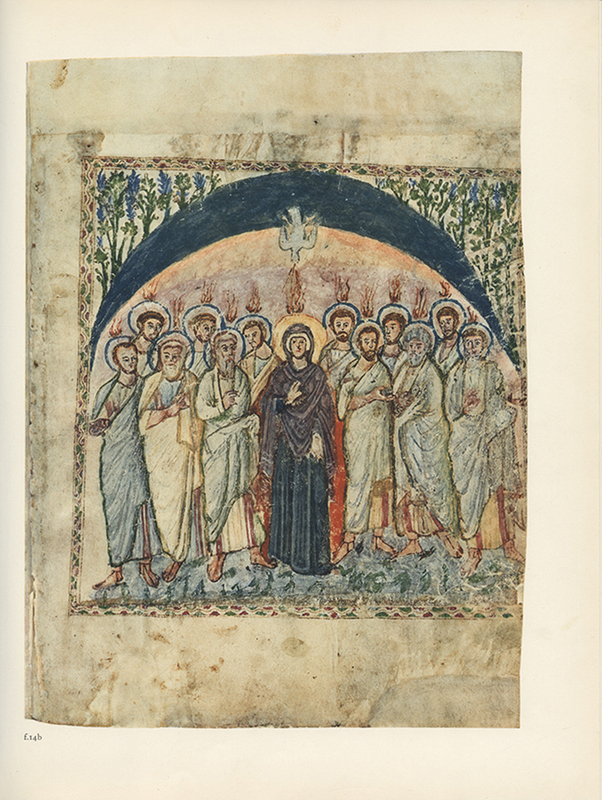 This 6th century illustration from the Rabbula Gospels depicts the scene of Pentecost as recounted in the New Testament book of Acts. In the biblical story, tongues of fire descend on the Apostles (depicted here with the Virgin Mary) as a sign of the divine presence of the Holy Spirit. According to Acts, the Apostles were miraculously enabled to speak in a variety of tongues including those of the “Parthians, Medes, Elamites, and Mesopotamians,” regional groups that might have included Aramaic speakers as well as Persians. This particular illustration is notable because it is likely the earliest such depiction of Pentecost in a Bible manuscript. The manuscript itself dates to A.D. 586 and was likely originally created by a Syrian Orthodox community. It was later preserved in one or more Maronite monasteries in Lebanon and today is housed in The Laurentian Library in Florence, Italy.