Syriac texts are one of the largest bodies of literature from the ancient Mediterranean, Middle East, and Asia. Perhaps as many as 20,000 manuscripts in Syriac survive today. Syriac ethnic communities continue to use classical Syriac today both in print and online. 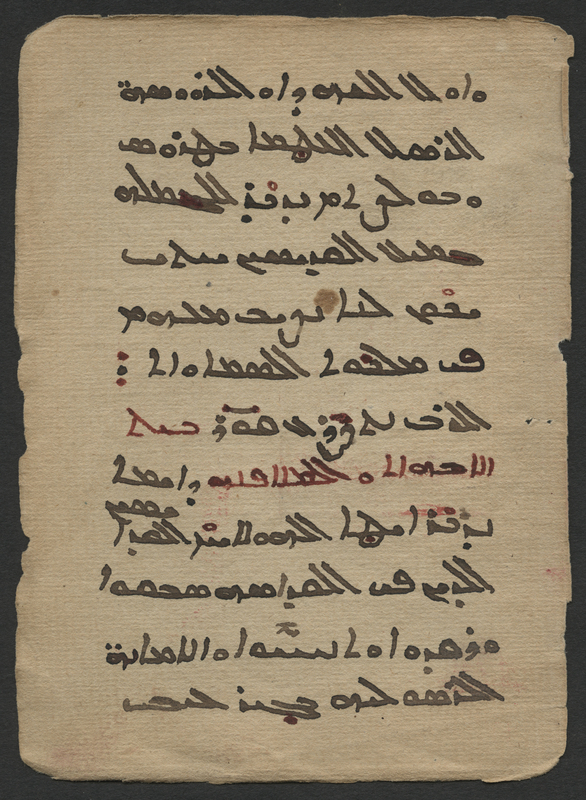 [Leaf from a West Syriac Liturgical Commentary Manuscript in Garshuni]

The Syriac script is an Aramaic alphabet derived from earlier Northwest Semitic scripts (a family of languages which has flourished for over 3 millenia). Over time, three distinct Syriac scripts developed. The oldest literary script, Estrangela, was used widely until the 8th century A.D. By this point a strong division between Eastern and Western Syriac dialects had developed leading to separate “cursive” scripts and systems of vowels serving East and West Syriac. The manuscript shown here is written in the Serto (or Western) script. The language of this manuscript is not Syriac, but Arabic written in Syriac characters. This practice, referred to as “Garshuni,” reveals the versatility of the Syriac script and the influence it had on other languages. For example, early alphabets for Middle Persian, Sogdian, Uyghur, and Mongolian were all derived from the Syriac alphabet.

[Leaf from a West Syriac Liturgical Commentary Manuscript in Garshuni]. circa 18th-19th centuries. Loan from the Beth Mardutho Research Library

Manuscript scribes need a system of ruled lines as a guide for their work, in order to make their writing uniform on the page. One common method of faintly marking such lines was a ruling frame. Thread or wires were woven in uniform lines through a wooden board. Before writing the scribe would place a blank leaf (page) on the board and press it firmly to imprint the lines on the leaf. After time, these lines would fade leaving uniform writing on the page. The ruling frame pictured here was made in 1979 by the monk Eliyo Öztaş as part of carrying on the Syriac scribal traditions.

In the 16th century, western interest in Syriac Christianity began to grow. Beginning with editions of the Syriac Bible, publishers sought out and printed Syriac texts as witnesses to the early history of Christianity. A variety of lead type fonts were developed for printing in Syriac using three different scripts. The lead type displayed here represents the “Serto” or Western style script. The origins of this particular font is unknown though it is likely from the 19th century. The characters on display here are variations of the letter “bēth” (ancestor of the English letter “b”) paired with different vowel sounds. In Syriac script, like Hebrew, vowels were optional and when included were written above or below the consonants. 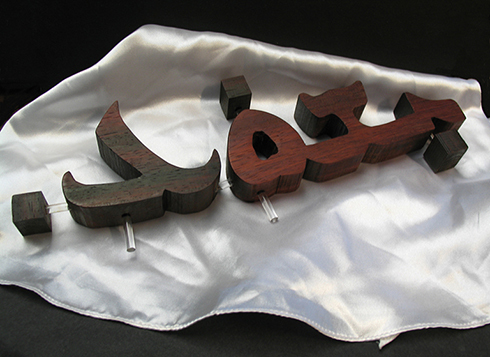 This contemporary piece was created by Steve Stone, Jr., a student in Vanderbilt Divinity School’s program in Religion in the Arts and Contemporary Culture. The artist carved the name of Jesus as it is typically spelled in East Syriac script (usually pronounced “Ishoʿ”). The piece is constructed of padouk wood and clear acrylic dowels. Padouk is known for its natural crimson color and this particular variety originates from Africa. The artist chose to use this type of wood as it resembles the color of fire, a common symbol for the Trinity.

← What is Syriac
The Bible in Syriac →
Syriac
Syriac Literature