The early European explorers wrote vivid accounts of their voyages to the newly discovered lands.  Some went as conquistadores, while others were buccaneers or adventurers in search of “El Dorado”. Aspiring cartographers sought to chart the globe, whereas Jesuits attempted to convert the indigenous and other explorers embarked on secret missions commissioned by kings and queens. Whatever their motivations, these early accounts provide insights into the New World. They describe voyages, civilizations, flora, fauna, and everything of interest in these faraway, exotic places. 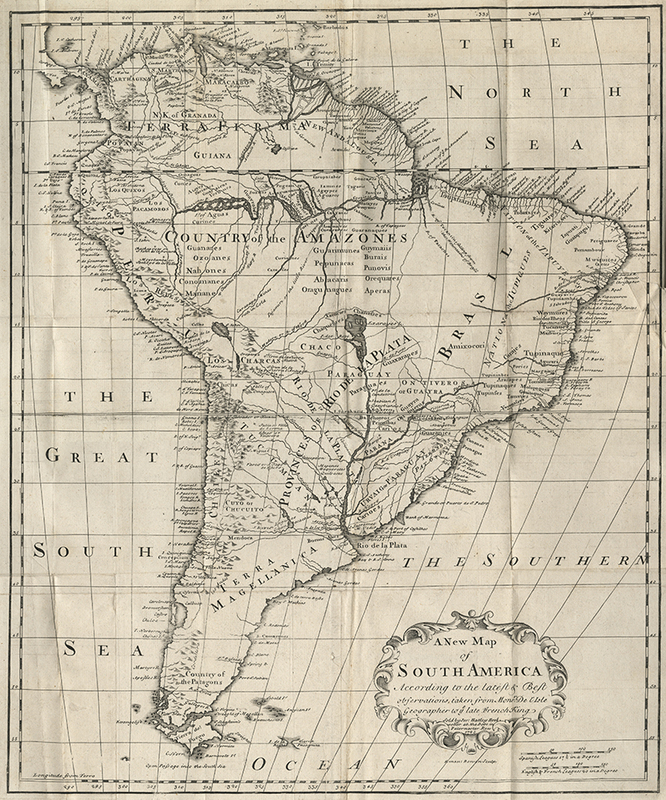 The 1625 map of what was known of Central and South America is identified as being “from the best authorities.”  Maps served as important cartographic resources for mariners, buccaneers, pirates, privateers, merchants, and explorers alike in the 17th century. Central America is not depicted in detail and only identified as New Spain.  Early cartographers drew only the main ports and cities as arrival and departure points in the New World. The large interior is identified only as “the country of the Amazones”.

The Treaty of Tordesillas, an agreement between Spain and Portugal, delimited both control of sea navigation routes and potential claims to newly discovered lands in the New World. It was signed in Tordesillas, Valladolid, Spain in June, 1494.  It repositioned the “line of demarcation” decreed by Pope Alexander VI in 1494 so that Portugal eventually gained control of Brazil. 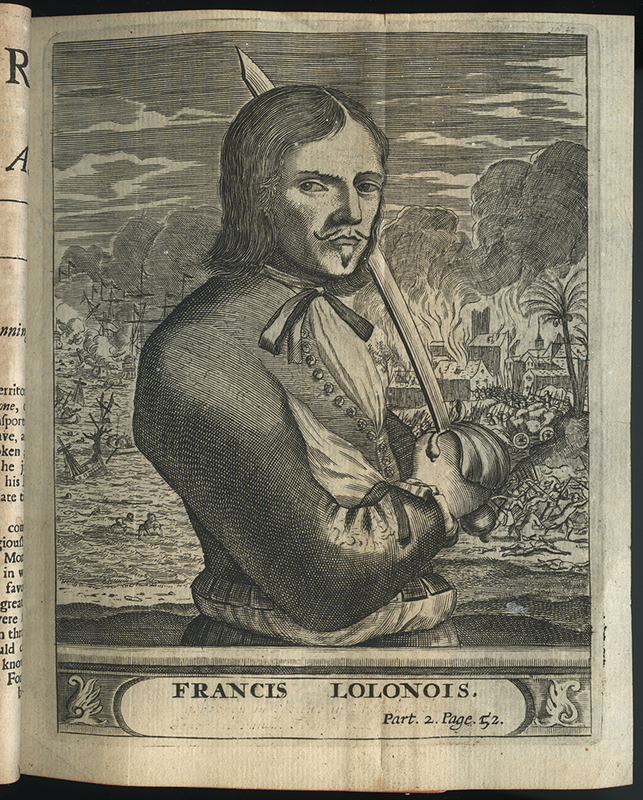 Buccaneers preyed on Spanish ships and settlements in the West Indies in the 17th century. In the early stages of the exploration and conquest of the Americas, some buccaneers wrote remarkable descriptions of the New World. François l'Olonnais, a French buccaneer of the XVII century, had experience in cartography, the military, voyages, and exploration. He had traveled to the West Indies as an indentured servant. In gaining his freedom, he quickly earned respect as a successful and unusually murderous buccaneer. His greatest achievement was the capture and plunder of treasure from the relatively well-defended towns of Maracaibo and San Antonio de Gibraltar in the Gulf of Venezuela. 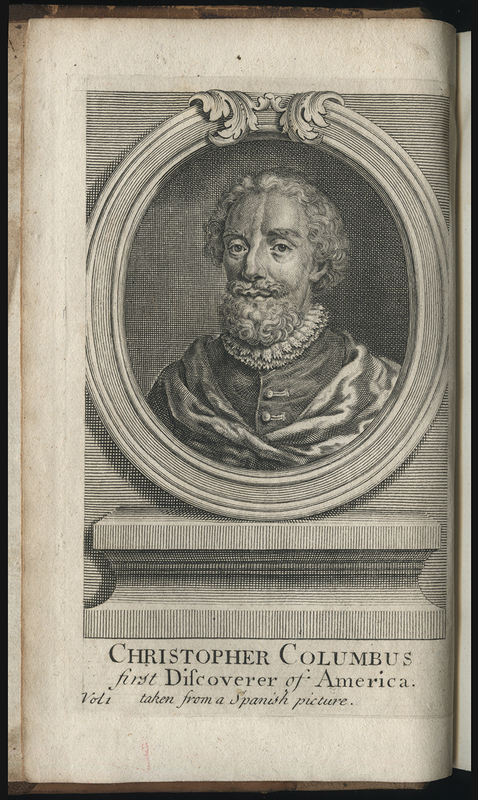 The most famous European explorer of the New World was Christopher Columbus, the “discoverer” of what would become America. Columbus was born in 1451 in the Republic of Genoa, Italy. His accounts of his travels are particularly fascinating because they are written through the eyes of the first Spanish explorer. He penned detailed accounts of both the native peoples and natural resources in places that he discovered in the New World. His expeditions set in motion the widespread transfer of people, plants, animals, diseases, and cultures both from the New World to Europe and also from Europe to the Americas. 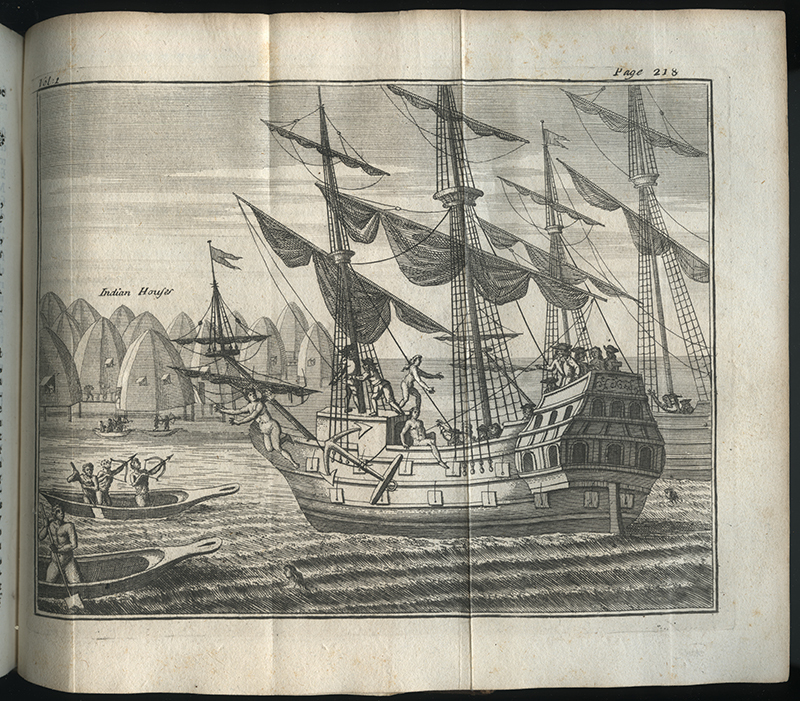 The favored vessel for buccaneers, explorers, and early colonizers was the Galleon.  The crew that staffed this kind of ship required special skills for sea navigation and exploration. Europe's expansion around the world meant that the ships were a vital vehicle in reducing the distance between Europe and the Americas, and they facilitated the transfer of gold and silver to Spain and slaves from Africa to America. Gradual improvement in ship design in the colonial era of the New World had a huge impact on the interaction between continents. 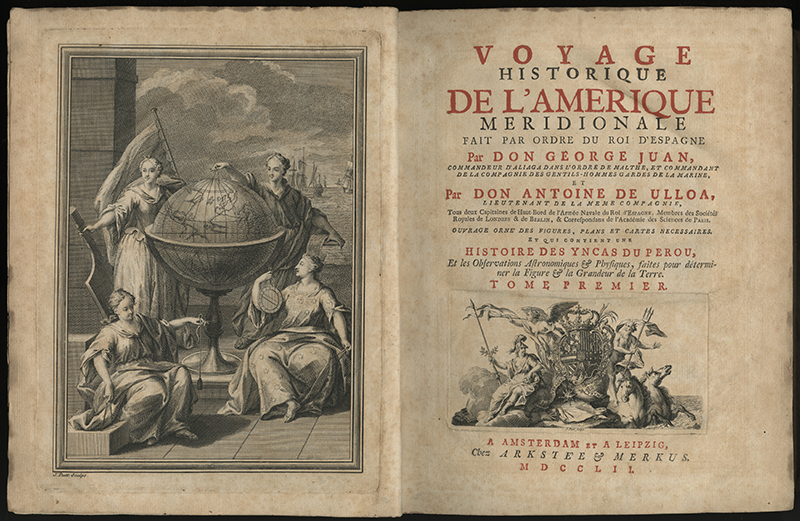 A major topic of discussion in the 17th century was the shape of the world. The frontispiece of Voyage historique de l'Amerique meridionale by Jorge Juan and Antonio de Ulloa provides a rough idea of the more sophisticated perception of this period. The concept of a spherical Earth was a controversial point for the early explorers, but the discovery of the New World ended arguments about the shape of the earth. The cartographers began to redraw their maps of lands and oceans as new explorations were made. 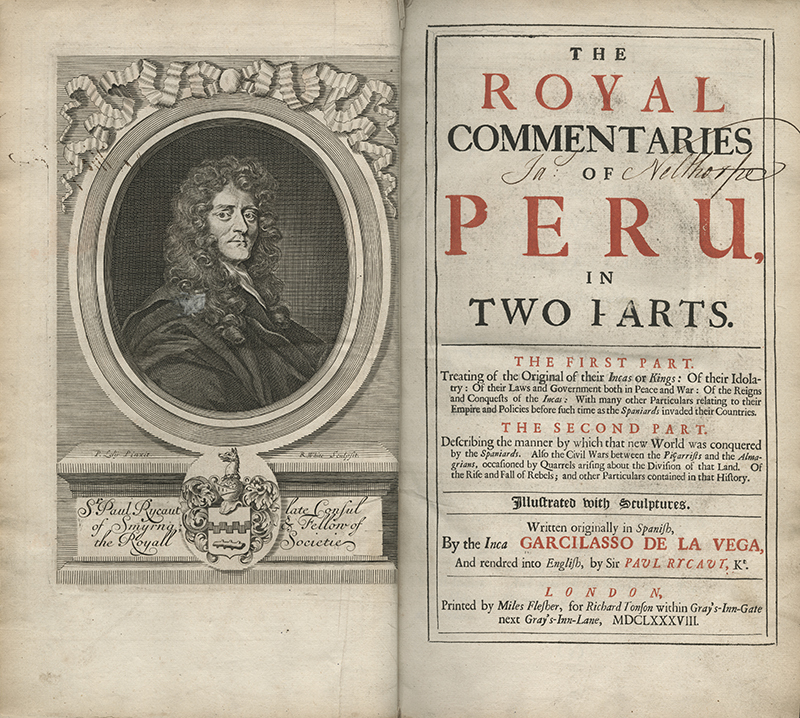 El Inca Garcilaso de la Vega was born in Cuzco, Peru in 1539, the son of a Spaniard and an Inca princess. He became known in Spain for his chronicles, considered to be both fiction and prose.  The Comentarios describe the conquest of Peru and daily life of the Inca. It serves as an important historical source though it has also been described as a “utopian novel.” The book, the first native American account, was widely read in Europe and continues to be a delight to read and valuable for understanding Inca civilization and the conquest through an indigenous perspective. 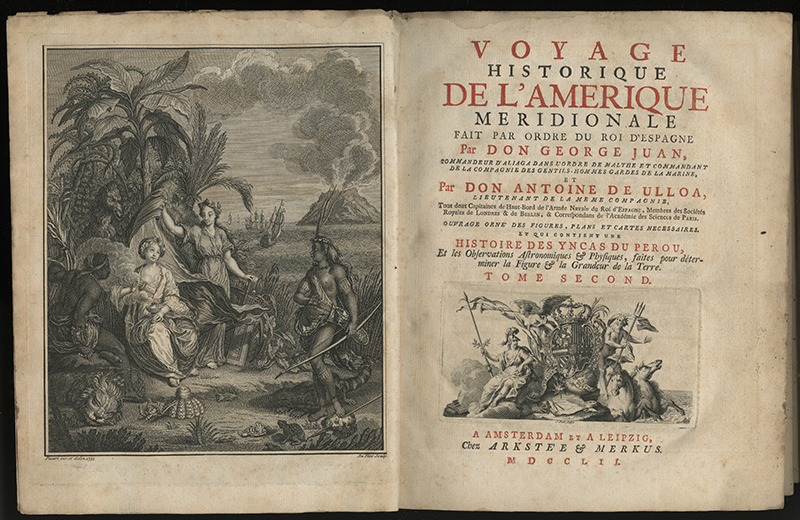 The frontispiece of the Voyage historique de l'Amérique méridionale depicts an encounter between the native peoples of America and the Europeans, reflecting the attitude of many Europeans that native peoples were simply a resource to be exploited. The encounter was an historic moment when two cultures came together to occupy the same space. 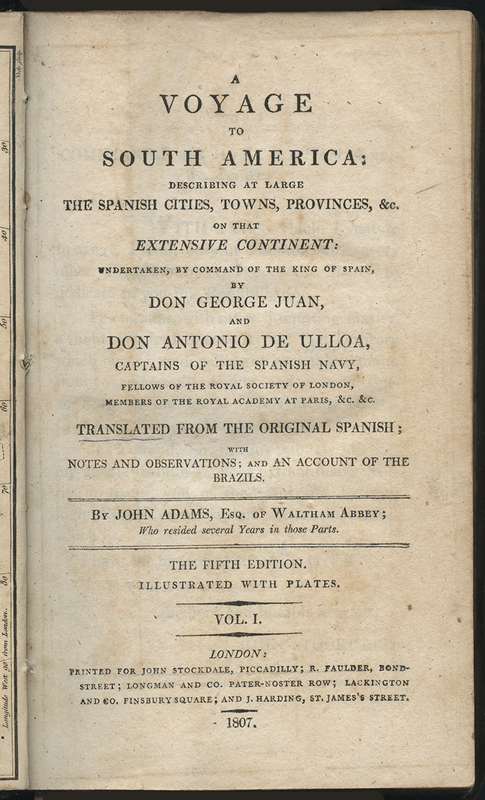 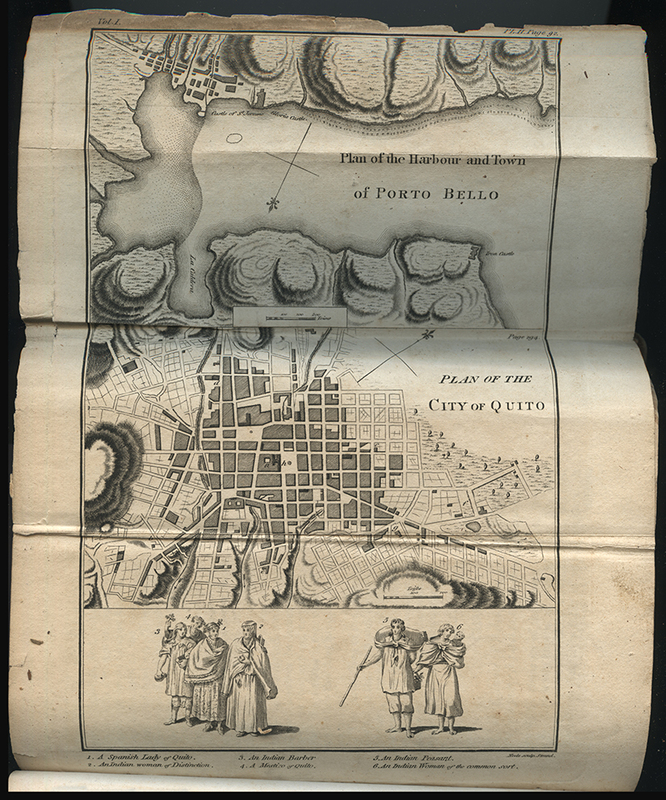 One notable feature of Ulloa’s work is the attention given to community plans. Ulloa and Juan were also traveling as “spies” for the king of Spain. His secret report on the fortifications, military force, maps, attitudes of the colonials, abuses of the natives, etc. was smuggled out of Spain and appeared in England published under the title Noticias secretas de América (“Secret expedition”).  Maps were especially guarded as state secrets by Spain and England. This illustration provides a plan of South America´s Cape St. Francois and also includes depictions labeled “Men of Chili” and “Killing the beast in Chili”. These and his accounts of natural resources and animals served as useful references for later explorers who came to America. 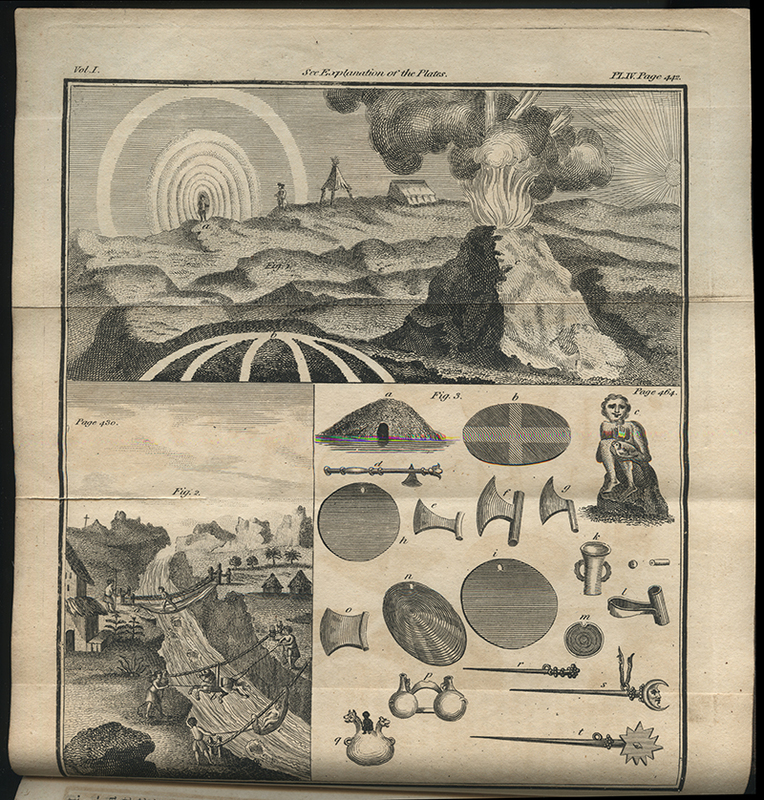 One of the most interesting exploration accounts was written by Antonio de Ulloa of Spain. One objective of his travels was to measure the degrees of the equator in cooperation with French explorers, but his books include many other observations on topics such as fauna, flora, and cartography in the early stages of the “discovery” of America by Europeans. His descriptions are peculiarly valuable because of their precision 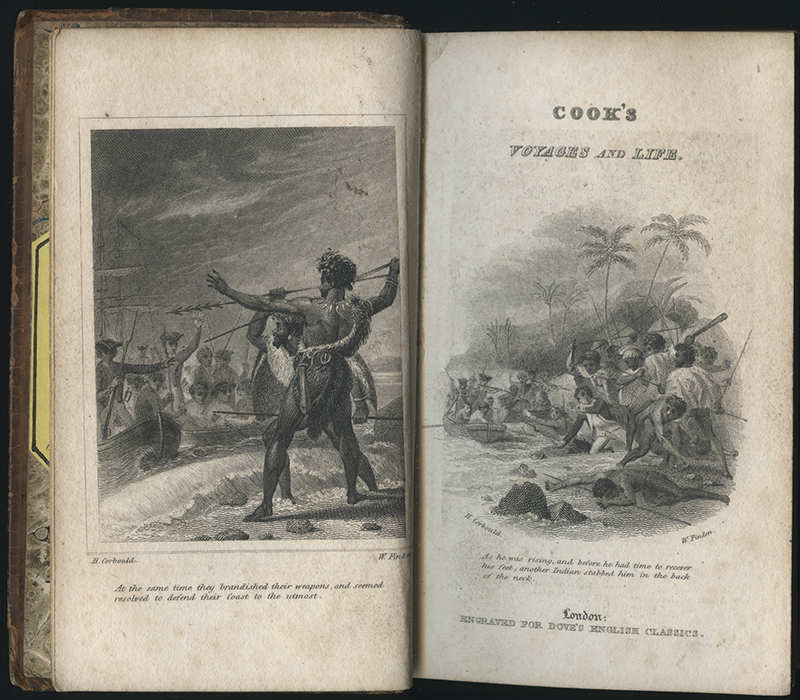 Captain James Cook was born in England in 1728. This book was written through the eyes of an explorer whose main purpose was to provide essential information to explorers. He wrote highly personal accounts of an uncorrupted New World, with notably favorable descriptions of the native peoples he encountered in largely unknown territory.