Since Columbus’s “discovery” of the American landmass, conquistadors and other early travelers to the Americas cited religious objectives and evangelization as key motives for their travels. Confronted with the traditional religions of the New World, many of these travelers sought to Christianize the native peoples whom they viewed as barbaric. Some, especially the Jesuits, sought to educate the indigenous populations, while others, like Franciscan Bernardino de Sahagún, were additionally motivated by a desire to understand the native cultures. This exhibit highlights those who traveled for religious motives, the Catholic institutions of the era, and their observations of the New World. 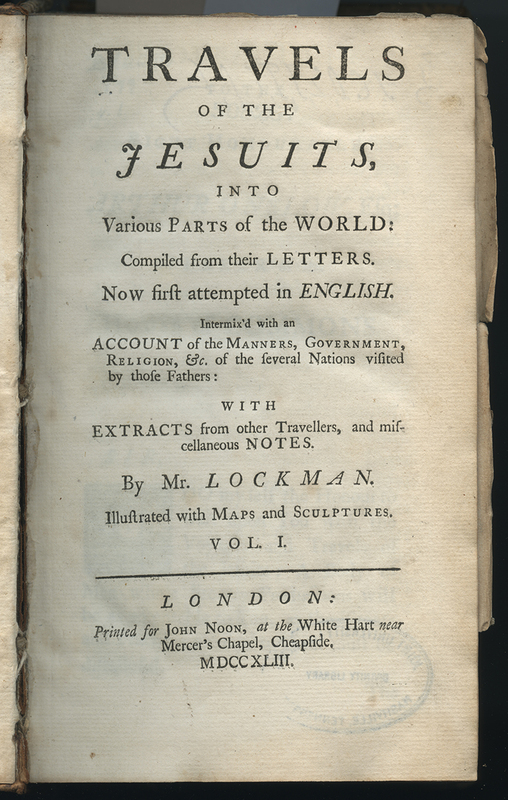 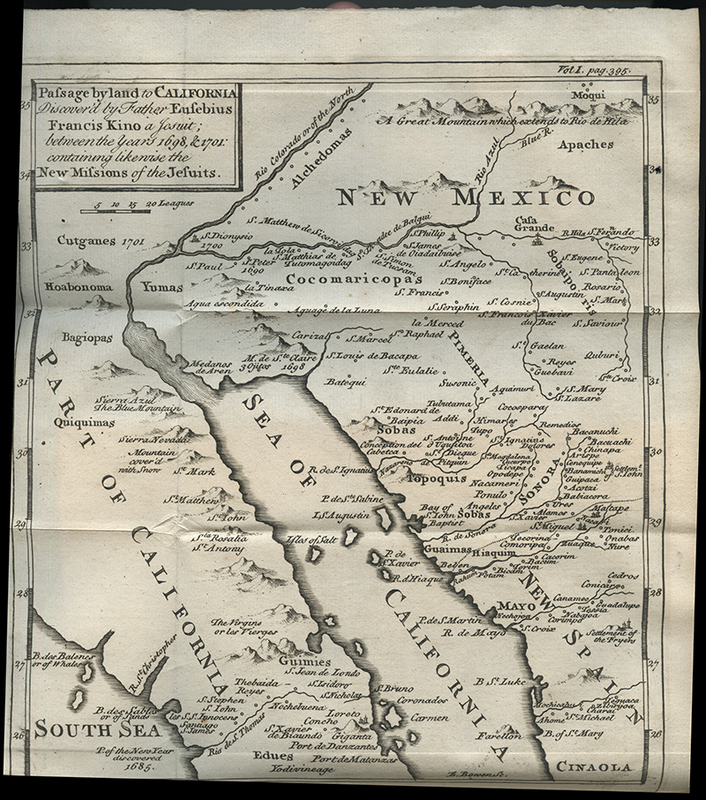 The Society of Jesus arguably conducted the most noteworthy religious colonization and conversion efforts of the Spanish Conquest. The members of this religious order – known as Jesuits – were especially engaged with the evangelization and education of the members of their missions. Arriving in the Americas as early as the 16th century, the Jesuits worked to congregate the native peoples in settlements called reducciones. This map – taken from an early English translation of Lettres édifiantes et curieuses écrites des missions étrangères – depicts a small portion of the vast region affected by early Jesuit efforts in the Americas. 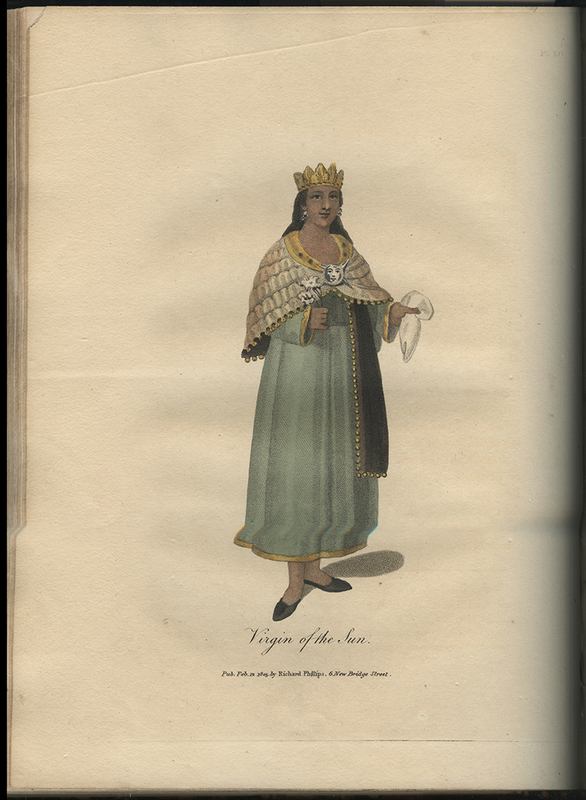 This image from the Englishman Joseph Skinner’s Present State of Peru depicts a traditional Inca “Virgin of the Sun.” In the Incan religion, young girls like the one depicted here were chosen by priests to serve the Sun God. While believed to fulfill a number of religious roles, some virgins are thought to have served as human sacrifices. This image depicts a young Peruvian girl participating in a 18th-century procession celebrating the coronation of Charles IV of Spain. 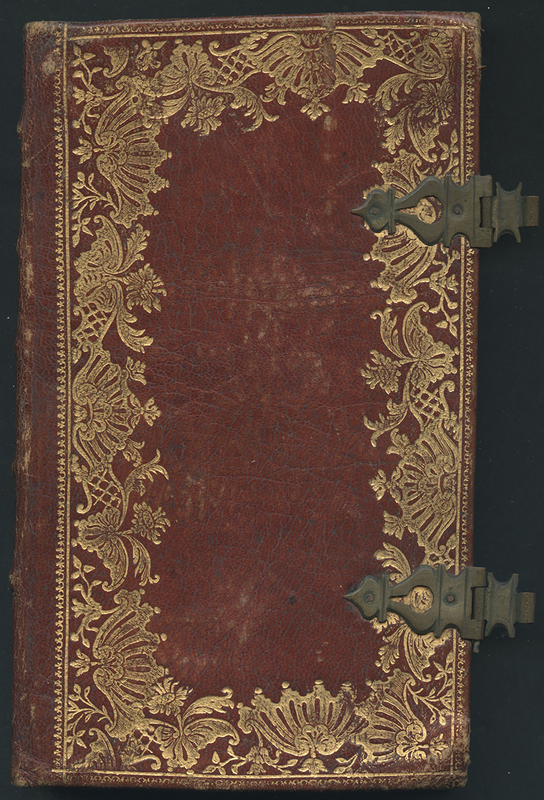 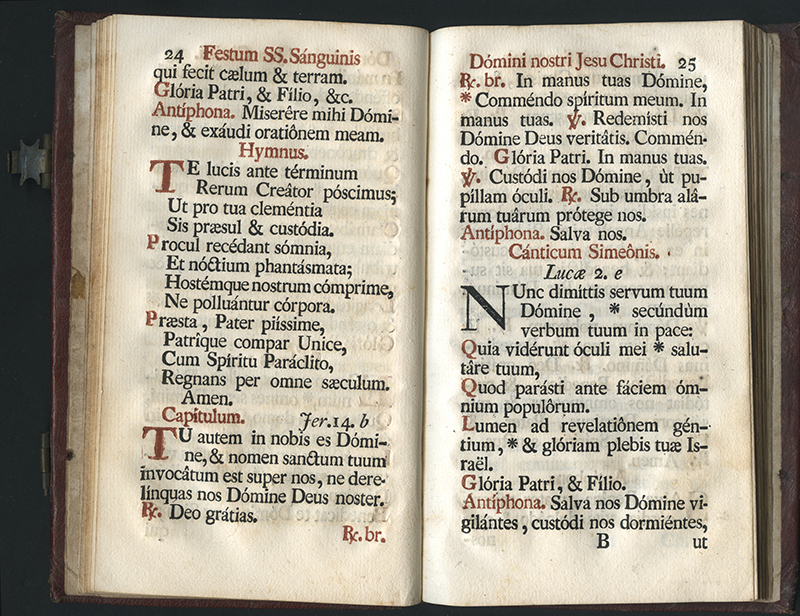 As a sacramental religion, the Catholic Church relied on the dissemination of Eucharistic liturgies to unite its global congregation throughout the conquest of the Americas. This liturgy, which dates back to the late 18th century, features a decorated binding and colorful Latin calligraphy. This specific liturgy was produced for the diocese of Mexico (formerly known as New Spain). 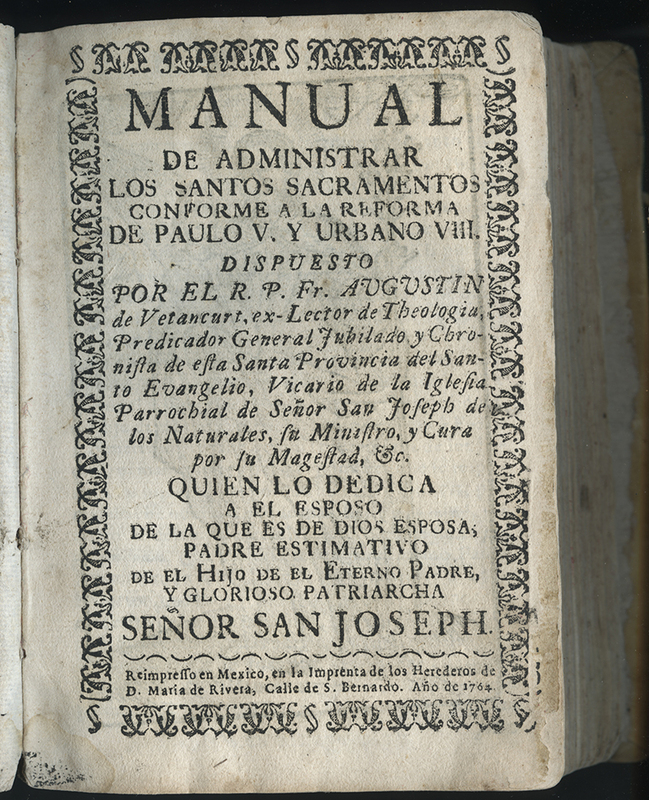 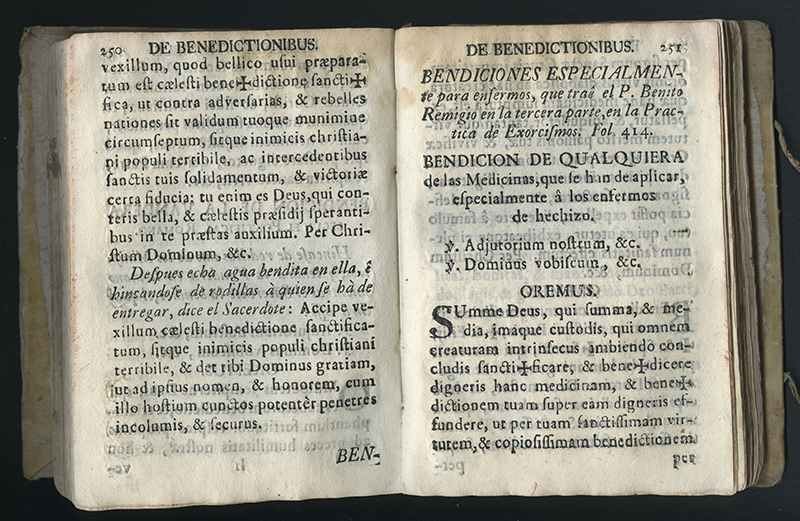 Created especially for the Cathedral of Mexico City and for the Franciscan Provincia del Santo Evangelio, this liturgy highlights the Catholic sacraments as they stood in the mid-18th century. The woodcut booklet, which features Spanish instructions within Latin prayers, was specifically produced for the Franciscan Order. 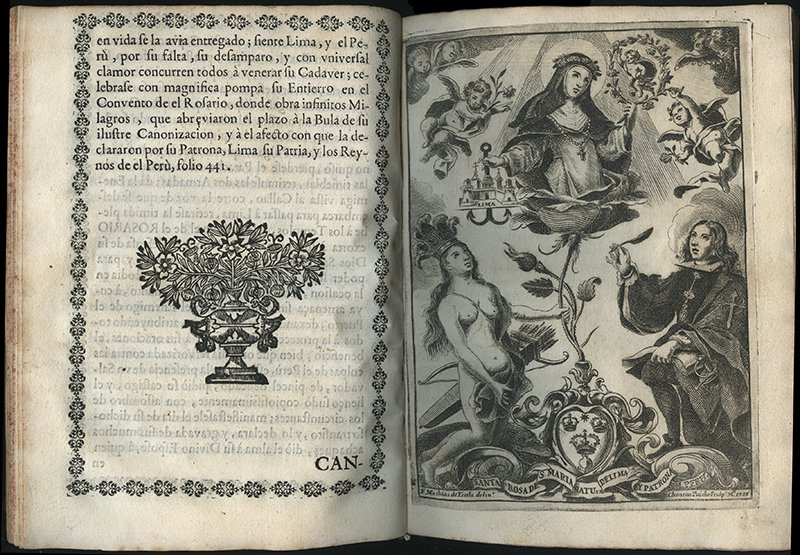 Santa Rosa de Santa María (1586-1617) was the daughter of a Spanish military officer and a criolla mother. To the disapproval of her family, she took vows of chastity and dedicated her life to the Dominican Order of the Catholic Church. Remembered for her personal asceticism and charity for the poor of Lima, Rosa was canonized following her death, making her the first Catholic saint born in the Americas. In this depiction, Santa Rosa is hailed as the patron saint of Lima, Peru. 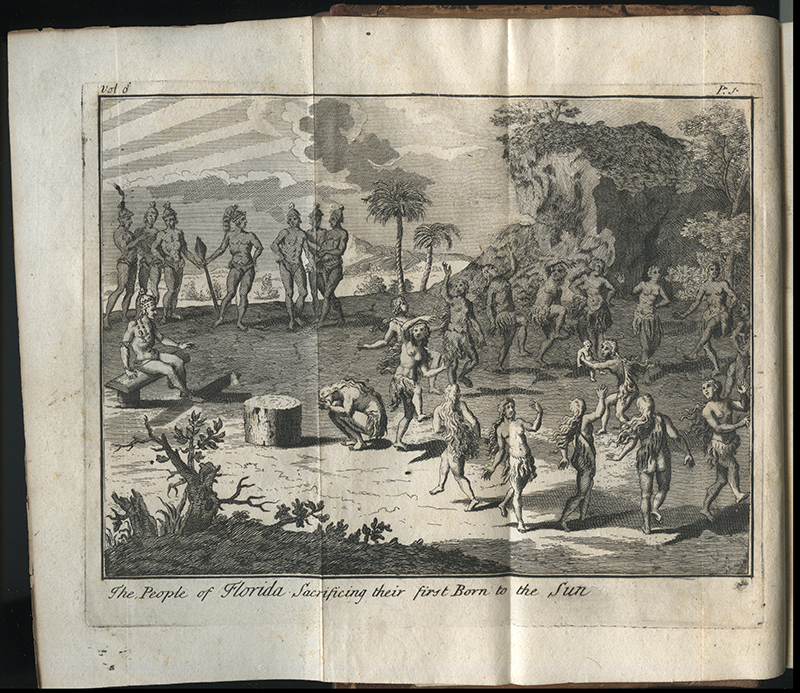 Through the reigns of King Philip II, III, and IV, Spaniard Antonio de Herrera y Tordesillas served as a court historian to the Spanish monarchy. Never having traveled to the Americas himself, Herrera relied heavily on the accounts by those who had in order to pen his extensive description of the Spanish territories. In this image, taken from an early and inaccurate translation of Herrera’s Historia general de los hechos de los castellanos en las Islas y Tierra Firme del mar Océano que llaman Indias Occidentales, the author offers a depiction of a religious ceremony practiced by indigenous peoples in Florida. The inclusion of this image in Herrera’s work alludes to the importance of religious themes in the early Spanish travel accounts. 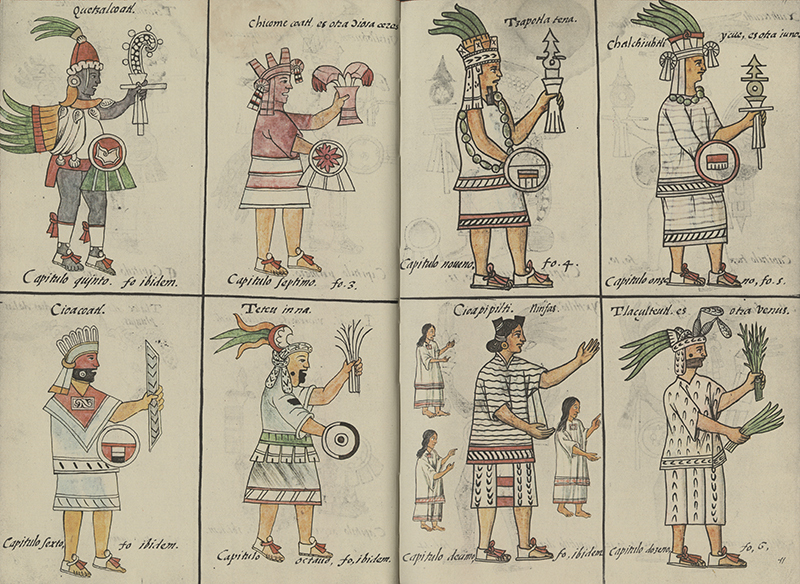 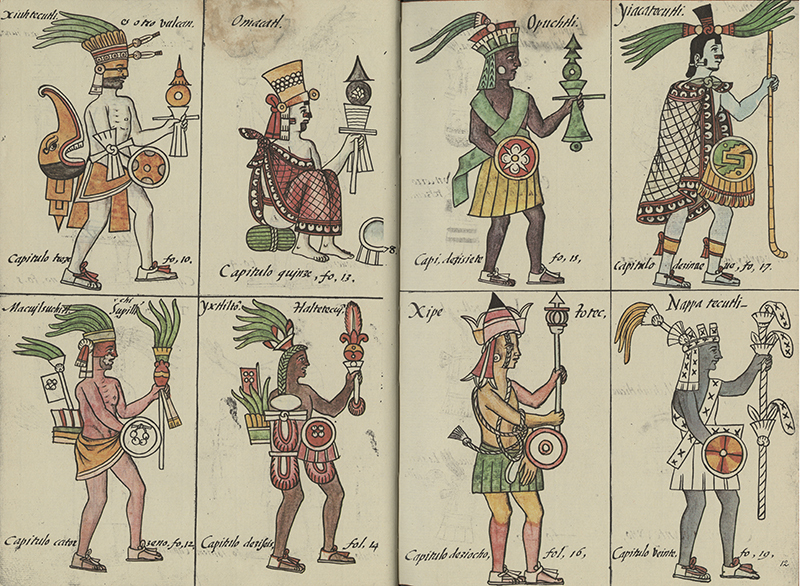 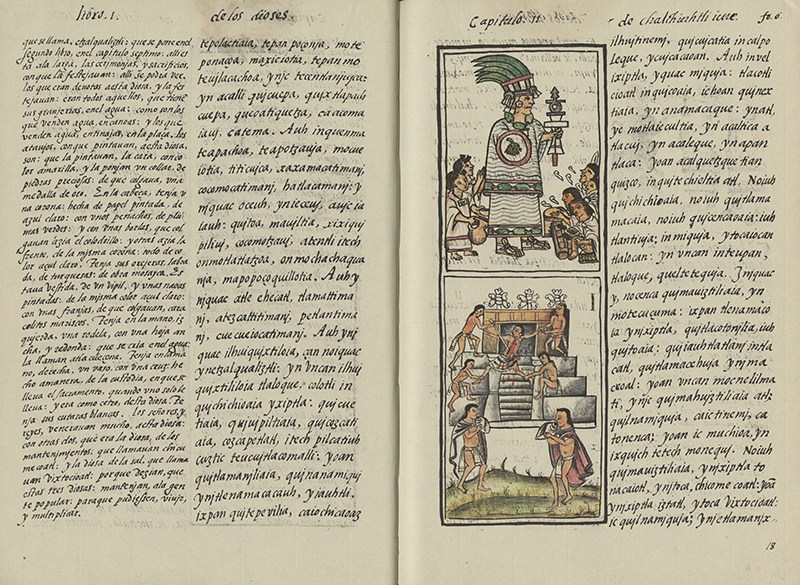 Renowned for his early advances in ethnography, Franciscan friar Bernardino de Sahagún served as a missionary to the indigenous Aztec populations of New Spain. He traveled from the Spanish mainland to the Americas in 1529, intent on evangelizing the native populations. Acting upon the belief that the native cultures must be understood prior to conversion, Sahagún spent several years learning the native language, Nahuatl, and observing the native populations. He documented these observations in his manuscript, the Florentine Codex, which explores themes such as indigenous religion, ceremonies, botany, and the Spanish conquest. In the images displayed, Sahagún depicts several of the numerous gods honored by the Aztecs. 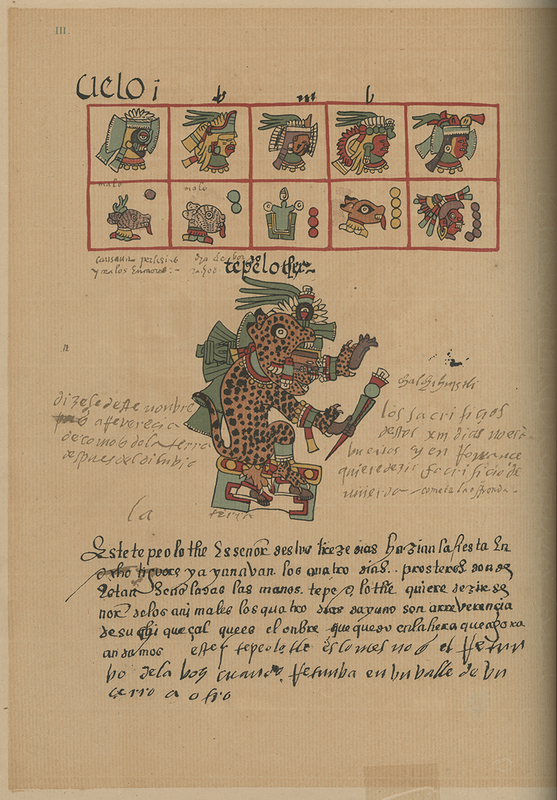 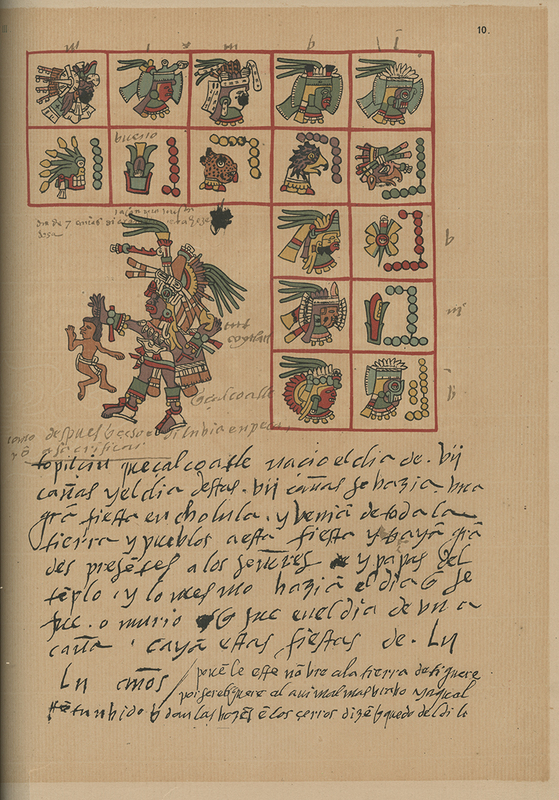 Much of what is known about Pre-Colombian societies has been learned from ancient codices. Dating back to the 16th century, the original creators of the Codex Telleriano-Remensis remain unknown; however, their brightly colored images have provided information on the Aztec solar calendar (“xiuhpohualli”), religious calendar (“tonalpohualli”), and history. The Latinized name of the codex is attributed to Charles-Maurice Le Tellier, the archbishop of Reims, France, a manuscript collector who at one point possessed the codex. The images depicted here show elements of the tonalpohualli calendar.

Born in Spain, Baltasar Jaime Martínez Compañón served as an advisor to the Spanish Inquisition before settling in the Americas as the Bishop of Trujillo, Peru, and ultimately as the Archbishop of Bogotá, New Granada. Notable for his attempts to educate the native peoples in Trujillo, Martínez Compañón documented his experiences and observations of indigenous culture in his nine-volume codex. The Codex Martínez Compañón is characterized by its detailed watercolors and musical scores. The original 9 volumes were sent to Madrid Royal Library to document flora, fauna, herbs, birds, seashells, and Inca sites. This image, taken from a facsimile of the codex, depicts a floor plan for a local seminary and correctional house.