In Mesoamerica, sacred rituals drew large crowds of spectators into the capital city of Tenochtitlan. The Aztecs honored deities with ornate ritual processions, sumptuous feasts, and bloody sacrificial offerings. Two of the principal deities included Huitzilopochtli “Hummingbird of the Left” and Xipe Totec “Flayed One.” The screen-fold tonalamatl “books of days,” such as the one on display, recorded the dates of important ceremonies. The movement of peoples in Pre-Columbian times thus often revolved around ceremonial centers and religious ritual events.

People in Mesoamerica consulted calendric documentation in order to know when to hold ritual events. Aztec tonalamatl (“books of days” in Nahuatl) recorded the dates of specific ritual ceremonies in Aztec calendar. This screen-fold book is made of deerskin parchment with colorful illustrations depicting ritual offerings to deities seated in temples. The row at the bottom of each page contains the associated calendric day signs, such as serpent, dog, jaguar, and crocodile. 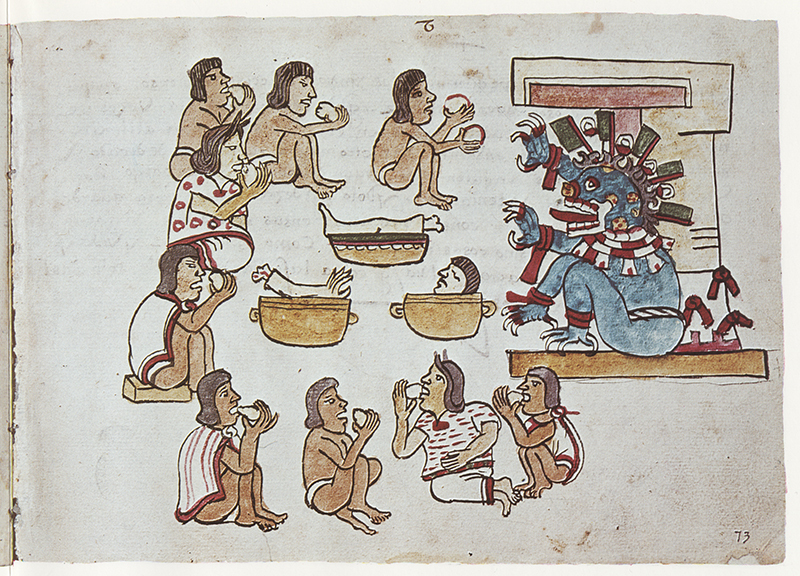 Two central concepts of Aztec rituals are reciprocity and gift exchange. Gods who created the world must be repaid for their sacrificial efforts in order to ensure the continuation of life and time. Thus for the Aztecs, bodily sacrifice is conceived of as a nextlaoalli or “debt payment” in Nahuatl. The ceremony consists of a sacrifice for a god, followed by ritualistic eating of the sacrificed body. In this case, cannibalism was a part of the ceremonial proceedings to ensure continued rain and fertility cycles. 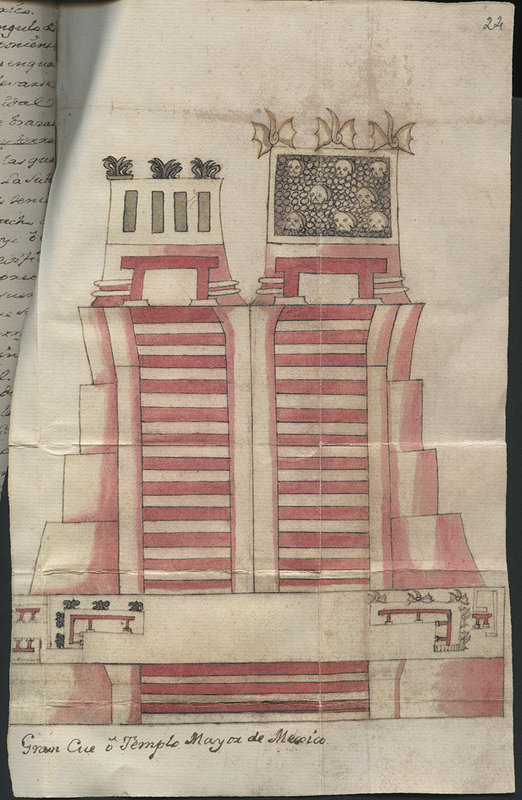 The Templo Mayor sits at the center of Tenochtitlan, the capital city of the Aztec empire located in current-day Mexico City. Religious ceremonies occurred at the central temple and drew hundreds of spectators from near and far. Large crowds would gather to watch performers dressed as deities carry out the rituals on top the Templo. The tzompantli or “skull rack” of the crania of captured enemies in war rests at the top of the temple. The imposing structure sends a message of power, intimidation, and awe to onlookers. 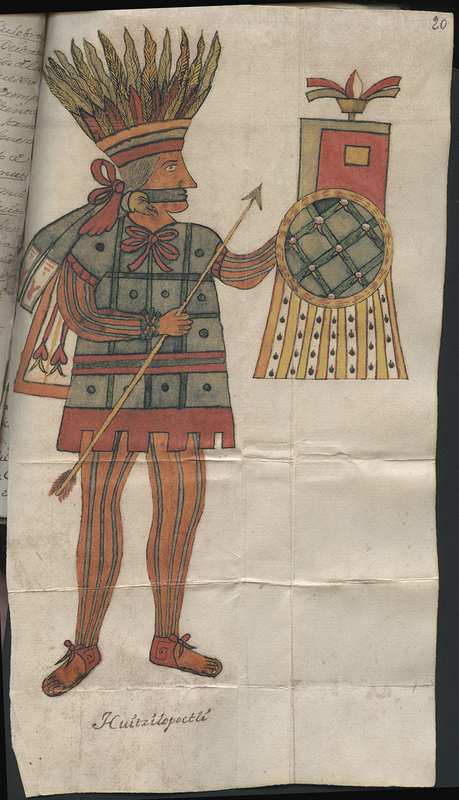 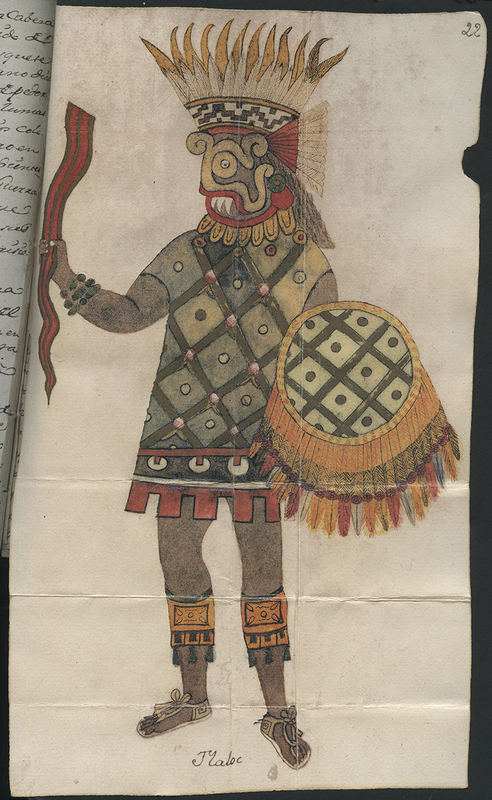 The two principal deities honored at the sanctuaries atop the Templo Mayor were Huitzilopochtli and Tlaloc. Huitzilopochtli was the Aztec god of the sun and war and the legendary founder of Tenochtitlan; he is depicted with features of hummingbirds or eagles. Tlaloc is the god of rain, distinguished by his goggle eyes, fangs, and blue-colored clothing. Both gods were considered vital to sustaining life and agriculture, and they were inherently complementary. The ornate costumes of these two major gods provided visual spectacles for viewers in the crowds that gathered below the main temple. 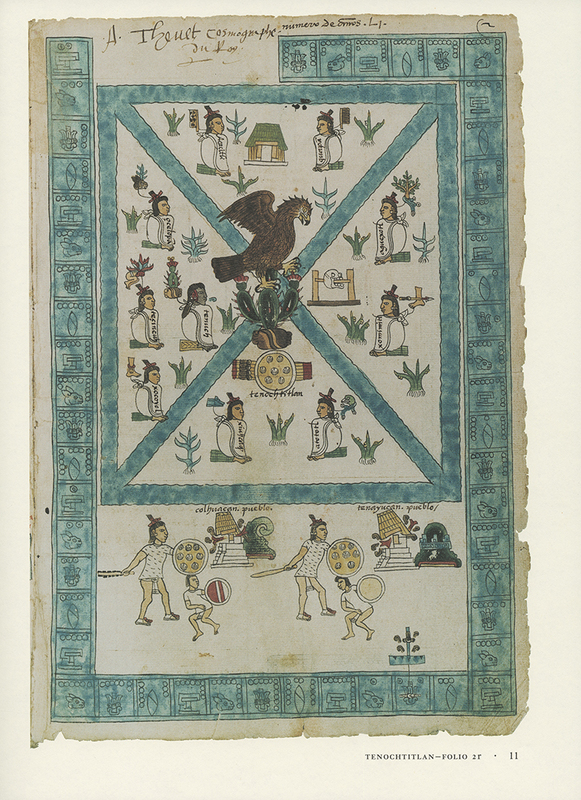 According to Aztec mythology, the god Huitzilopochtli wandered the desert in search of a place to settle. When he saw an eagle land on top of a cactus, he decided to found the capital city of Tenochtitlan at that location. The layout of this map speaks to Aztec cosmovision, or view of the world around them. Tenochtitlan was the center of their world and the unification point of the four cardinal directions. Disparate peoples would return to the mythical center for religious ceremonies. The original Codex was commissioned by the Viceroy of New Spain and sent to Charles V of Spain. The ship was captured by a French privateer and the Codex now resides in the Bodleian Library in Oxford. 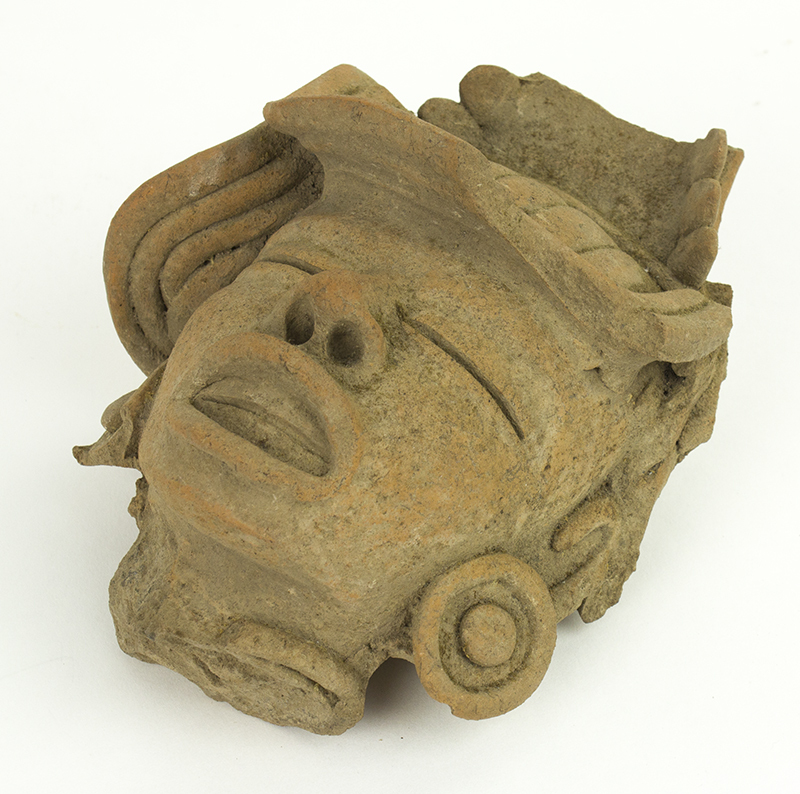 This ceramic sculpture depicts the Aztec god Xipe Totec, the solar lord associated with war and whose name means “Flayed One.” The object dates to the Pre-Columbian Post-Classic period, between AD 900-1521. The sculpture was used in Aztec rituals in ancient Mesoamerica to honor new growth. The flayed human skin that Xipe Totec wears around his face and body was no doubt a visual spectacle for ceremony participants. 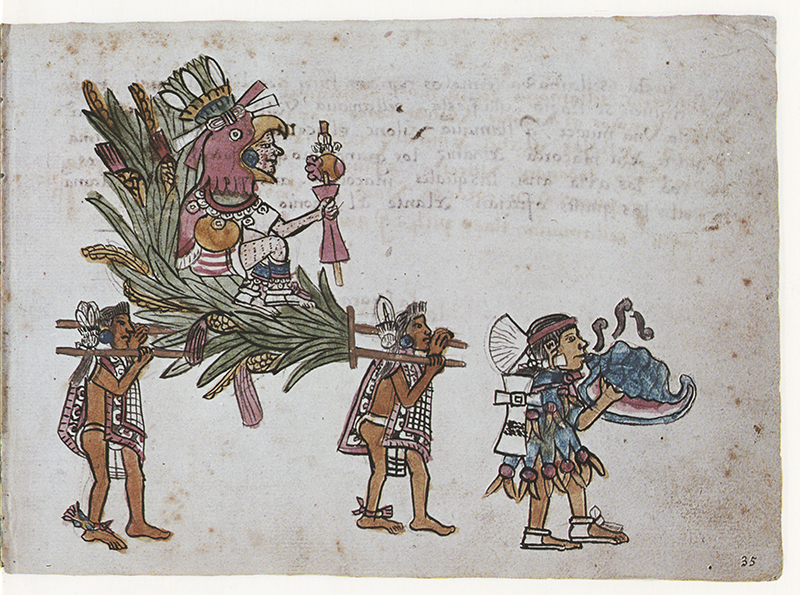 The tecuilhuitl ceremony (the great feast of the lords) occurs during the eighth month of the Aztec calendar and is dedicated to female gods of fertility and corn. Across Mesoamerica, corn was revered as the basis and origin of human life. The image here depicts a leader sitting on a litter carried by two attendants in a musical procession. The leader is dressed as a parrot and sits on a bed of corn leaves on the litter. This drawing helps us imagine what the ceremonial processions looked and sounded like for participants and viewers.

The Pre-Columbian Maya Codex Peresianus is made of tree bark and contains Maya hieroglyphic writing and drawing. The screen-folded pages depict Maya ritual practices and ceremonies. The glyphs surrounding the drawings on each page narrate the events occurring in the image. Many Maya rituals focus on renewal cycles and occur at the end of the calendric cycles of 260 and 365 days. This codex served for literate ritual leaders to have a record of the details of when and how a ceremony should take place. 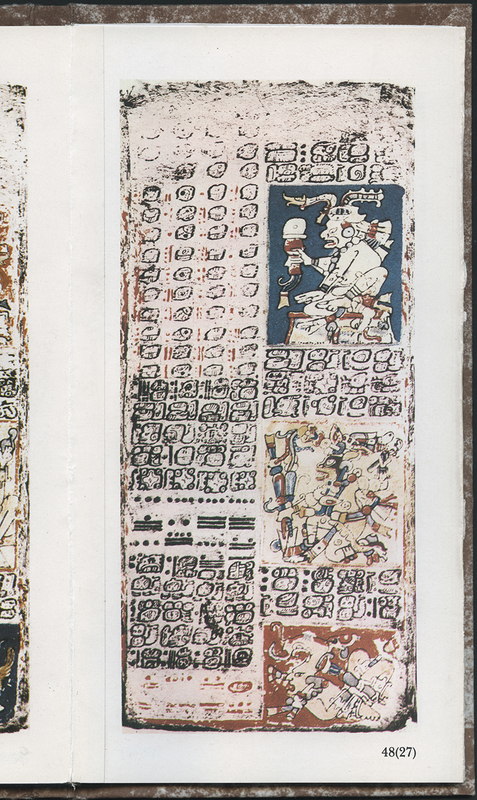 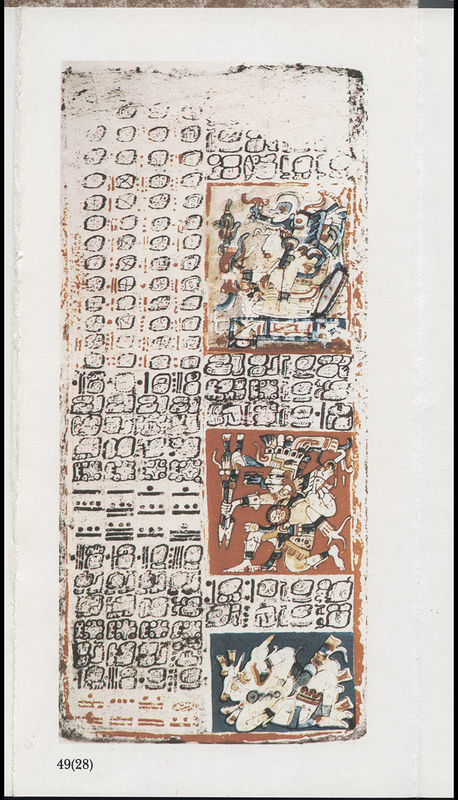 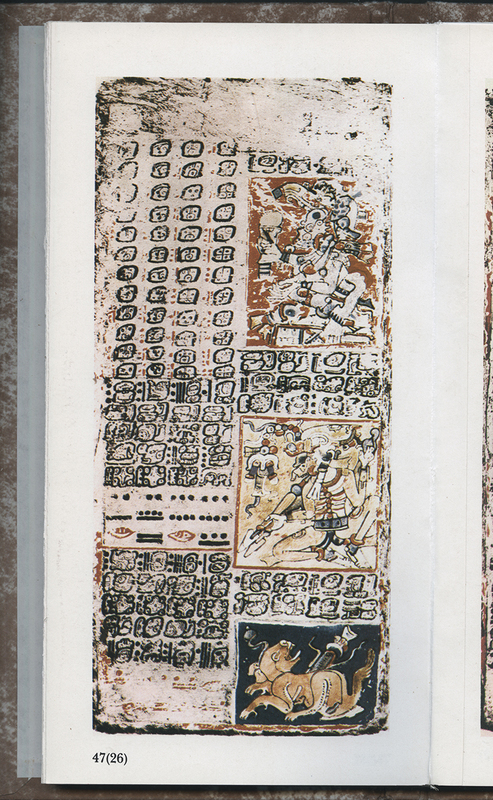 The Maya believed that by making a sacrifice to each god during their festival, they would secure prosperity and continued life. The hieroglyphic texts here explain the astronomical alignments that dictate when each ritual is to be performed. By observing celestial bodies, the Maya accurately timed their movement into ceremonial centers for religious activity. 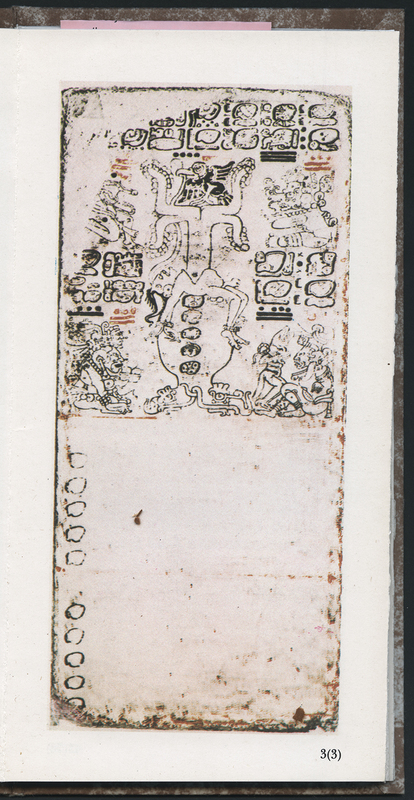 The Dresden Codex is a Maya text that includes hieroglyphic writing and illustrations of religious rituals. On this page, a tree emerges from the cadaver of a sacrificed body that lies on a sacrificial stone. From the open torso of the body grows a Ceiba tree, the pivotal tree. The Maya revered this great tree as a central part of their cosmovision since it connected the underworld and the upperworld to the earth. Maya religious movement revolved around the great Ceiba tree. 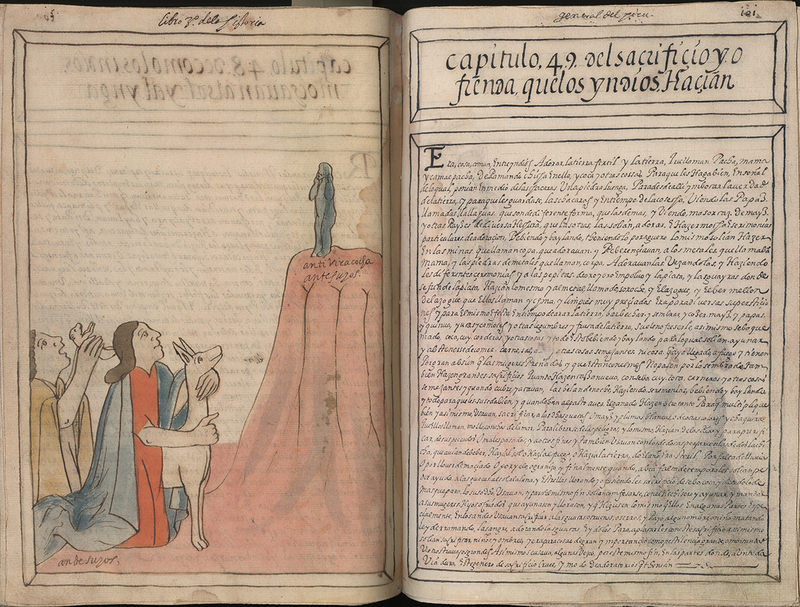 Sacrifice was an integral part of religious life in ancient Peru as in Mesoamerica. As displayed here, the Inca walked to sacred natural land formations called huacas. In order to secure weather for a good planting or harvesting season, communities would sacrifice a llama at these sacred places. The blood from the llama would be spilled onto the pachamama or “mother earth” in an act of reciprocity. The movement of the Inca was governed by religious and mythical beliefs centered on reciprocal exchanges. 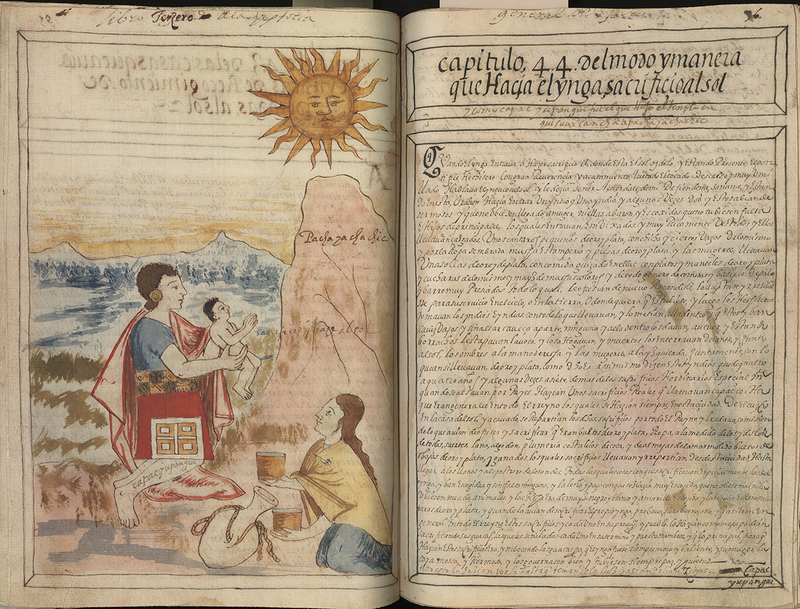 The Inca made pilgrimages to huacas or “sacred places” in order to make an offering, which in this instance is a child. The ceremony also includes libation from two complementary qeros or “drinking vessels.” Fermented corn beer called chicha was often the libation used during ceremonies and ritual events. The ancient Inca rituals required people to make pilgrimages to sacred places. Here, the movement of people was dictated by religious doctrine based on reciprocity and exchange. 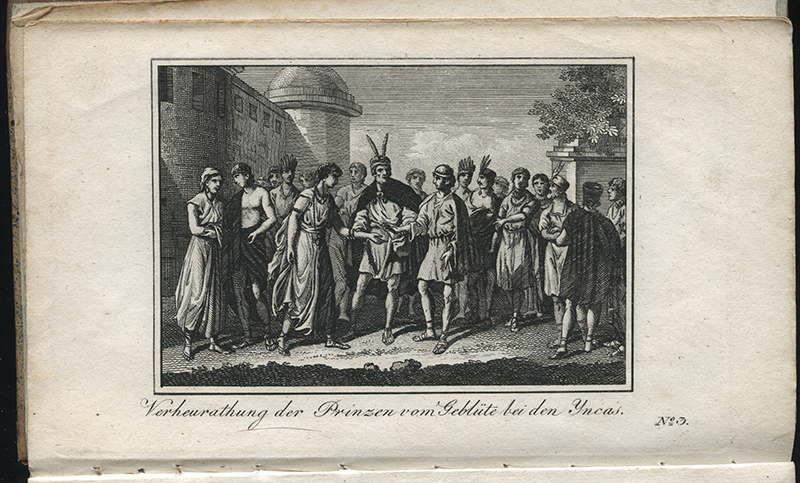 The Inca royal class was maintained through strict hierarchical lineages in the 15th and 16th centuries until the arrival of the Spanish. At the top of the social order was the Inca emperor or the Sapa Inca, followed by his ruling class, the panaca. The remaining members of society comprised the peasant class and worked as farmers, quipucamayoqs (knotted string record keepers), or chaskis (running messengers). This illustration depicts a marriage between members of the Inca ruling class. The participants and attendants are well-dressed and their robes and sandals are reminiscent of men of high status in ancient Greece. 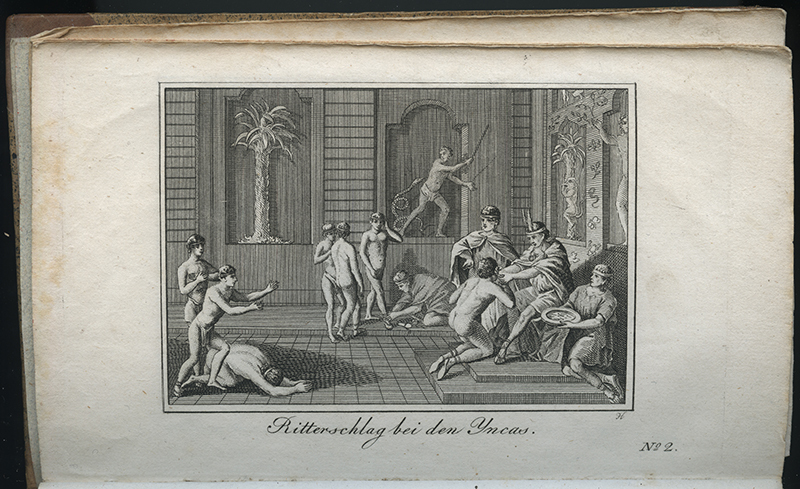 The Spanish conquistadores first encountered the Inca Empire in the mid-16th century when they reached the Andes. They were surprised by Inca religious practices and disdained them as satanical. The Europeanized drawing illustrates the common practice of revering the Inca king, as he was believed to be a descendent of the sun. In their written chronicles, Spaniards emphasized the need to end Inca idolatrous practices and to convert the indigenous populations to Christianity in order to save their souls. 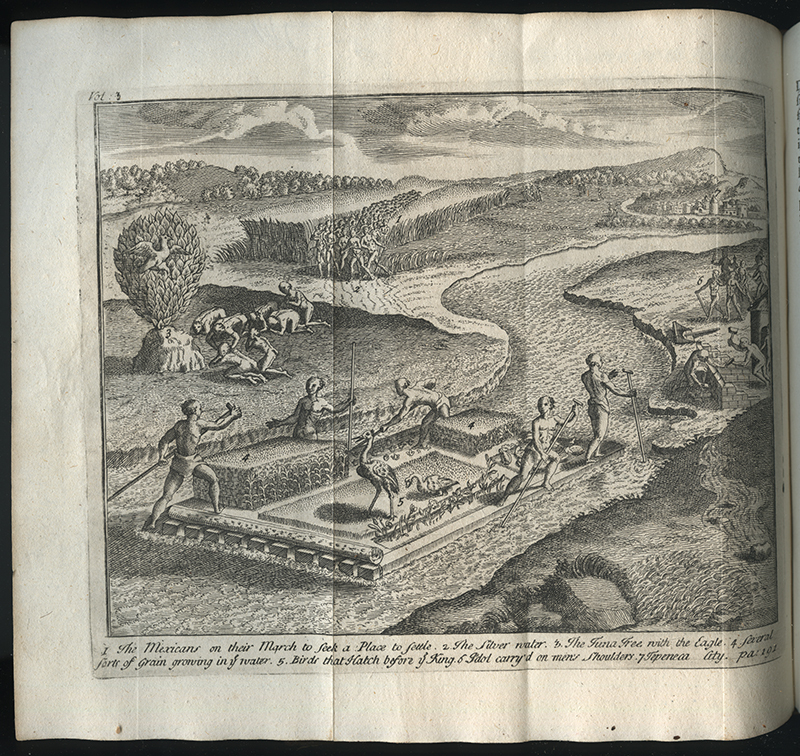 After the Spanish conquistadores began arriving to the New World in the 16th century, they began documenting the peoples, religions, and cultures they encountered. This plate drawn by a Spaniard is an idealized depiction of indigenous movement into a ceremonial center. The Aztecs are aboard a raft in a river in search of a place to settle and found their civilization. Although its style is very European, the drawing includes important local symbols of an eagle on a cactus plant in the background.