This exhibition contrasts the differences between urban and rural settings in 19th century Colombia.  The various travelers’ accounts illustrate the perils and challenges of living and traveling through the cordilleras of the Andes.  These precarious conditions created new modes of transportation, which include traveling by cabullas, rope bridges, and cargueros.  In contrast, the ornate theater programs show the rich cultural life and diverse entertainment options that were available in Bogotá.  The international guests in Bogota’s theaters demonstrate the city’s modernity, cosmopolitan flare, and global importance in the 19th century.

Harry Warner was a famous Canadian acrobat and equilibrist.  In this program, the theater announces his anticipated performance and dubs him “The Hero of the Niagara and the Tequendama,” a name that he earned for crossing the Niagara Falls on a tight rope in 1860 and for crossing the Tequendama Falls in 1895.  In this specific performance, he was to cross a wire on a Columbia bicycle, which was claimed to be the safest, fastest, and thriftiest bicycle in the world.

The Teatro de Cristóbal Colón announces the penultimate show of the season, which was to present Maestro G. Verdi’s “Othello”.  The Italian Opera Company and its first tenor Sr. Antonio Baggetto were to perform “Othello”, an opera based on the tragedy written by Shakespeare.

This theater program advertises the greatly anticipated performance by the French-American and Japanese Company at Bogotá’s Municipal Theater.  This company wished to demonstrate their best performances, which had never been seen before or exhibited previously in the capital of Colombia.

This program announces a gala directed by Manual Criado, which was to take place in Bogotá’s bullring.  This event was also a benefit and a farewell to Mrs. Laura Sabatini De Criado, who was to be recognized for her artistic contributions and endeavors.  The program consists of eleven acts. 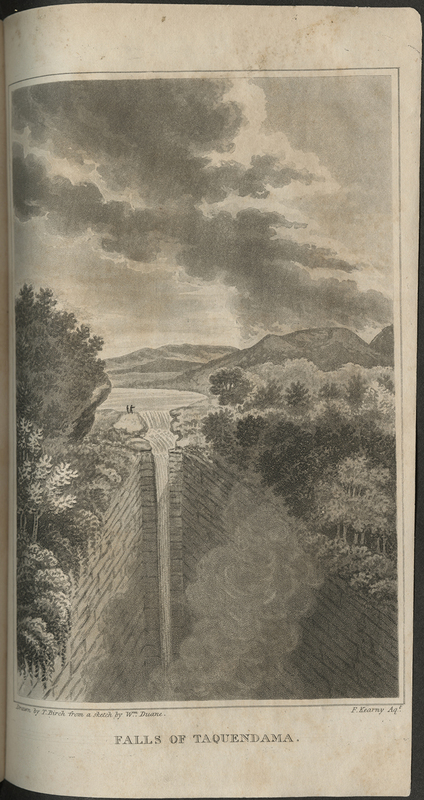 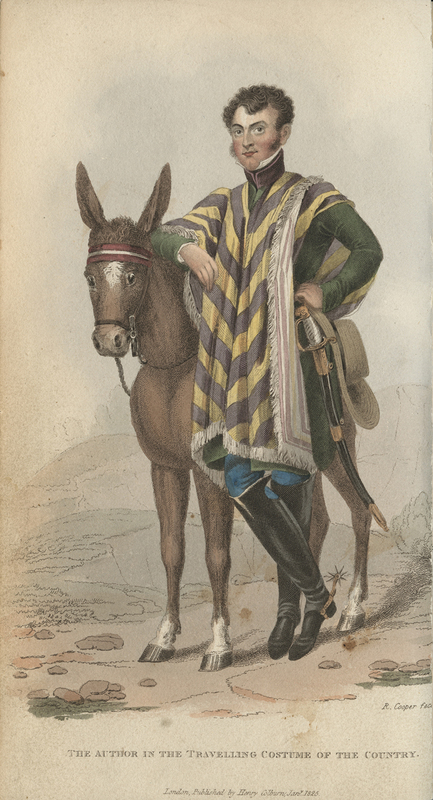 This portrait shows the author Captain Charles Stuart Cochrane, a former member of the British Navy, wearing traveling clothes native to Colombia.  He is wearing a striped poncho over his British military attire and is carrying a sword.  His travel narratives provide a detailed perspective on Colombian history and culture during the early 19th century. 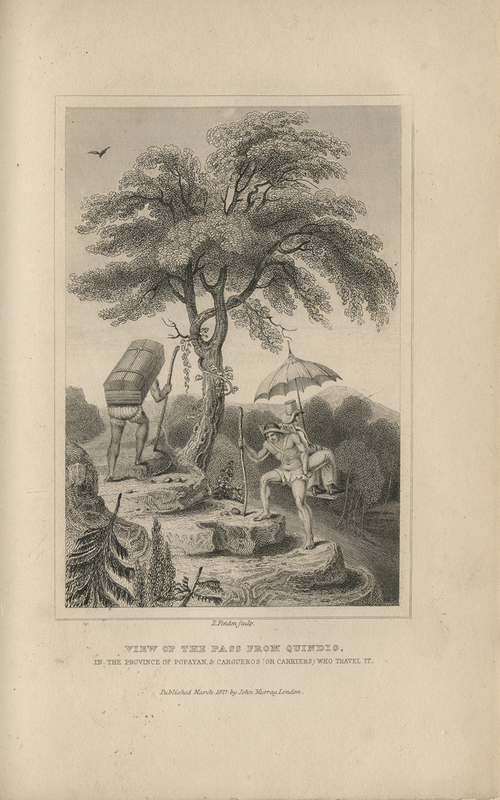 Local cargueros customarily transported the elite and their luggage by strapping portable chairs on their backs.  These cargueros are traveling through the Quindío Department, which is located in the western central region of Colombia and is intersected by the Andes Mountains, thus explaining the rocky precipices depicted here. 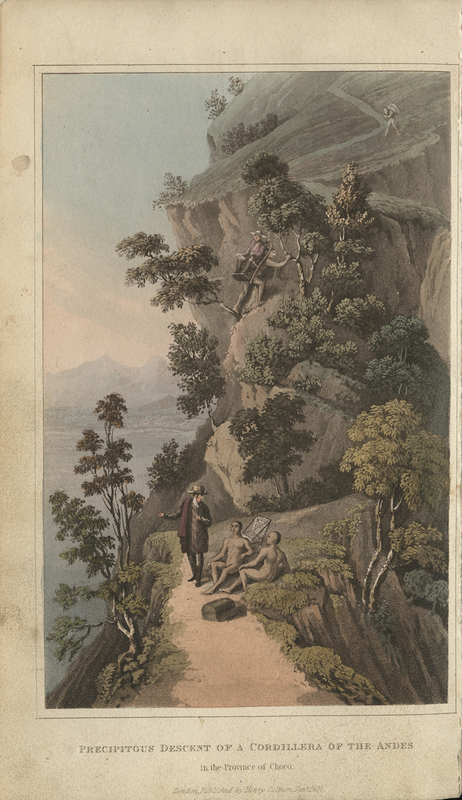 In this illustration, two men are being carried down a cordillera of the Andes on the backs of cargueros.  One of the cargueros continues to descend with a traveler on his back while two others rest at the bottom of the precipice.  They are traveling in the Chocó Department, which is located west of Colombia and its coastlines border both the Pacific and the Atlantic Oceans. 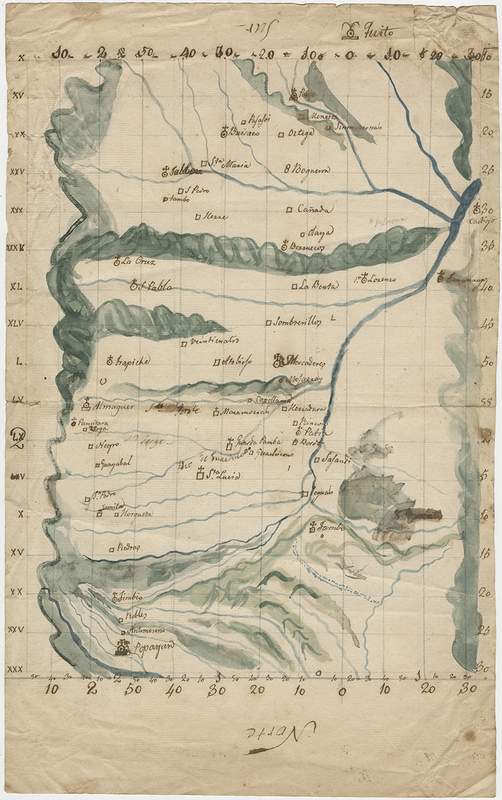 This hand-drawn map of Colombia includes latitudinal and longitudinal axis and provides cardinal directions.  Apart from illustrating cities and rivers, the cartographer references the estimated location of Quito south of the latitudinal axis. 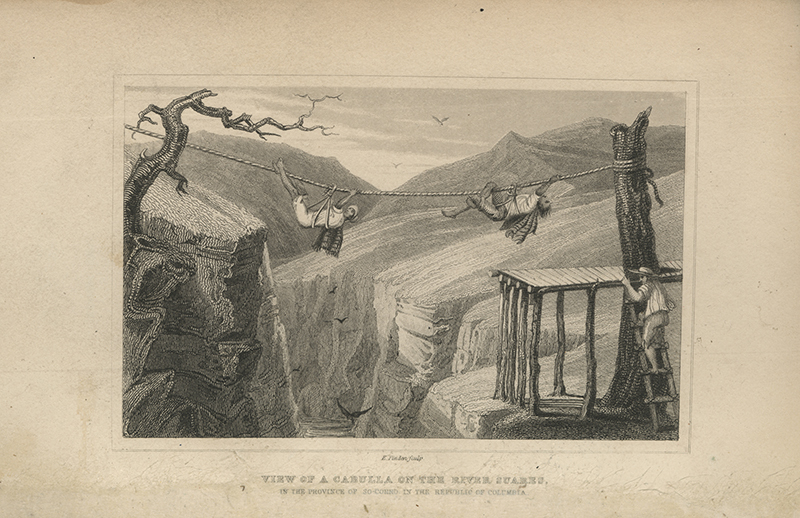 Traveling by moving along a cabulla, which is a rope customarily made with pita fiber, was another mode of transportation that Colombians used when traversing the rocky terrain of the Andes.  The illustrator depicts two men traveling by cabulla to cross the Suárez River. 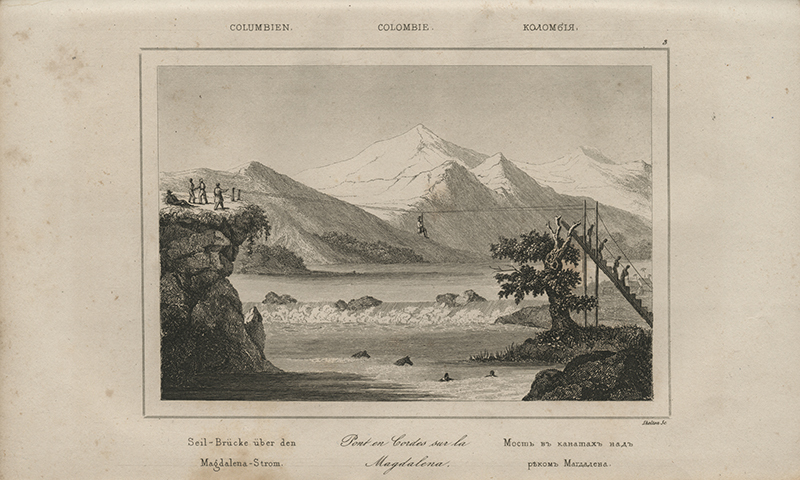 Yet another treacherous mode of transportation is depicted in this illustration.  Several Colombians are crossing a river in the Department of Magdalena by traveling on a bridge made of rope.