During the 19th century, interest in archaeology shifted from a personal endeavor to a national undertaking as countries began to create national museums and invest in the discipline of archaeology as a tool for historical and anthropological research. European scientists and explorers became interested in the abandoned Maya and Inca ruins of Central America and Peru. Many of these sites had not been explored documented since the initial encounter hundreds of years before and, with the development of new technology in the 19th century, it was an ideal time for explorers to return to the ruins and record more detailed documentation and imagery. This case specifically focuses on the work of Stephens, Catherwood, Maudslay, Waldeck and Tschudi and their explorations in Central America and Peru. 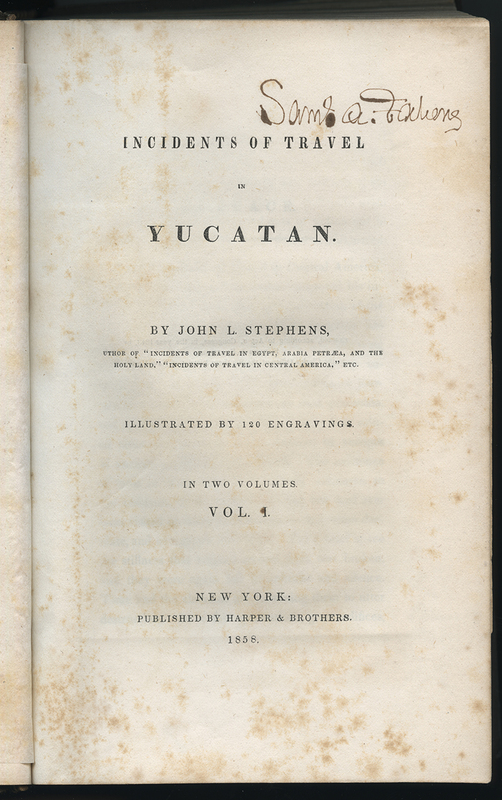 In the middle of his career, John Lloyd Stephens grew tired of the legal profession and in 1834, he left the United States for Europe and the Mediterranean where he became famous for his travelogues and earned the nickname “the American Traveler”. In 1839, President Van Buren selected Stephens for a secret diplomatic mission to Central America, during which he extensively explored the Maya ruins, such as Copan, Palenque, Quiriguá and Uxmal, and subsequently published this two-volume travelogue of the area. After his archaeological travels, Stephens continued to have a strong influence in Central America as the vice president of the Panama Railroad Company. 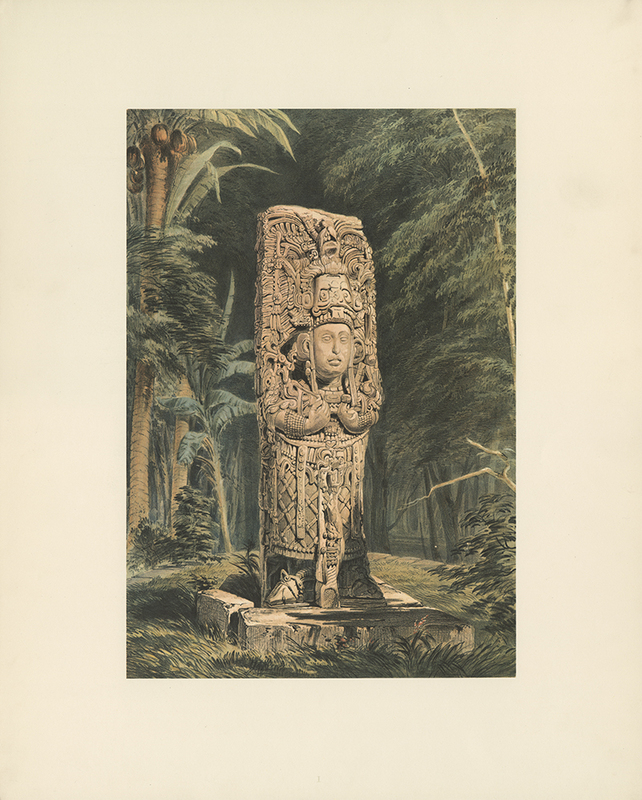 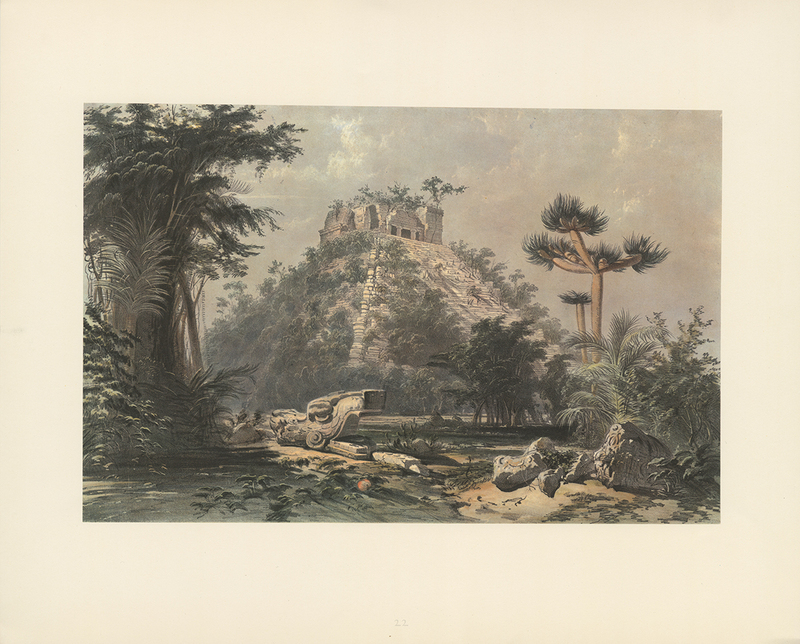 After meticulously studying ancient ruins and sculptures throughout Europe, British artist and explorer Fredrick Catherwood stumbled upon an account of the Maya ruins with his new friend John L. Stephens in London. With the goal of capturing these structures in detail, Catherwood accompanied Stephens on his trip to Central America. There, he created a collection of 25 watercolor lithographs from the various ruins he encountered. Of these beautifully drawn and famous prints, two of the most notable are images of the stelae of Copan and the principal temple at Tulum. Catherwood created the most detailed drawings and paintings of the Maya ruins in existence during the late 1830s.

About 50 years after Stephens and Catherwood made their descriptive and visual accounts of Central America and the Yucatan, a copy of their world famous travelogue fell into the lap of young British medical student, Alfred Percival Maudslay. Maudslay immediately became engrossed in the world Stephen’s words had created and decided to set sail for the Americas, intending on becoming an archaeologist of the ruins throughout Central America. Since Maudslay could not improve upon the drawings of Catherwood, he discovered a new calling: photography. Maudslay spent over 13 years working as one of the most prominent recorders of the Maya ruins and captured the first photographs of the same iconic ruins that Stephens and Catherwood described and depicted. 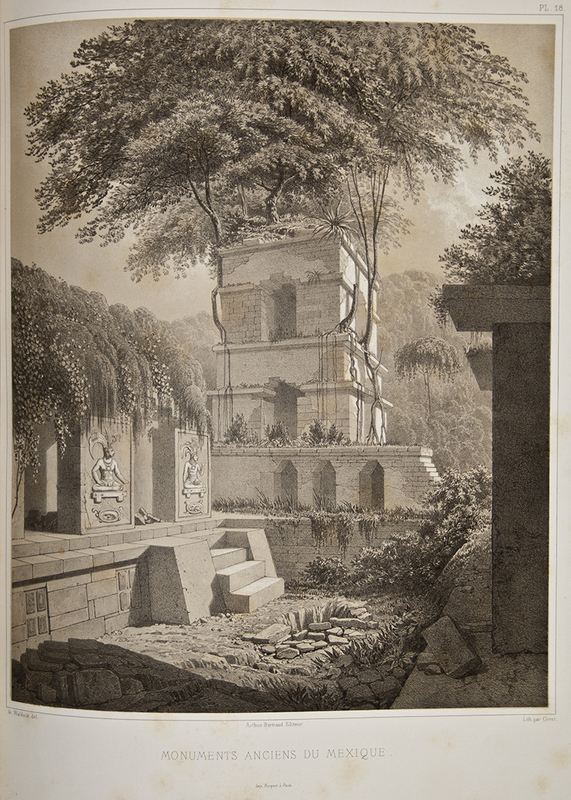 Count Waldeck was a 19th century French archaeologist of many talents and mysteries. Although it is generally accepted that he was of French origin, records show that Waldeck was born in four different cities, had several different birthdates, and lived for over 109 years. He was said to have been an antiquarian, cartographer, artist, engineer, explorer, and pornography publisher, and to have traveled across South Africa, Egypt, and the Americas. Despite the rumors about his life, Waldeck was most known for his artwork and drawings made of the Maya ruins in Mexico. Waldeck spent most of his time in the ruins of Palenque and Uxmal. 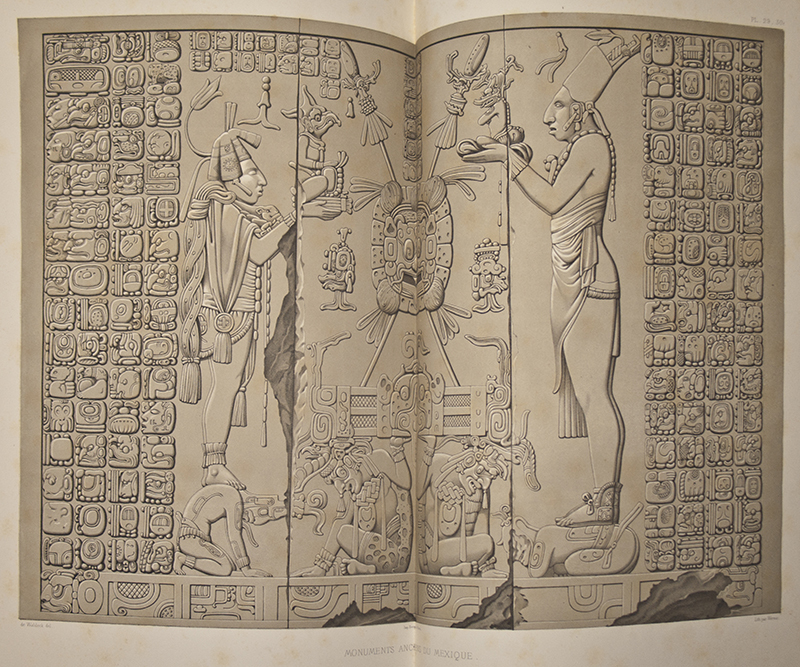 In accordance with the mysteries surrounding Count Waldeck’s life history, many of his drawings also include elements of fantasy. A well-known example of Waldeck’s creativity is the recurrence of elephant heads in his plates reproducing the carvings on temples in Palenque. Elephants also appear in the accurately depicted Maya hieroglyphs.  It is thought he added the elephants as a nod to his donors who believed the Maya civilization would not have developed independent of the Old World. 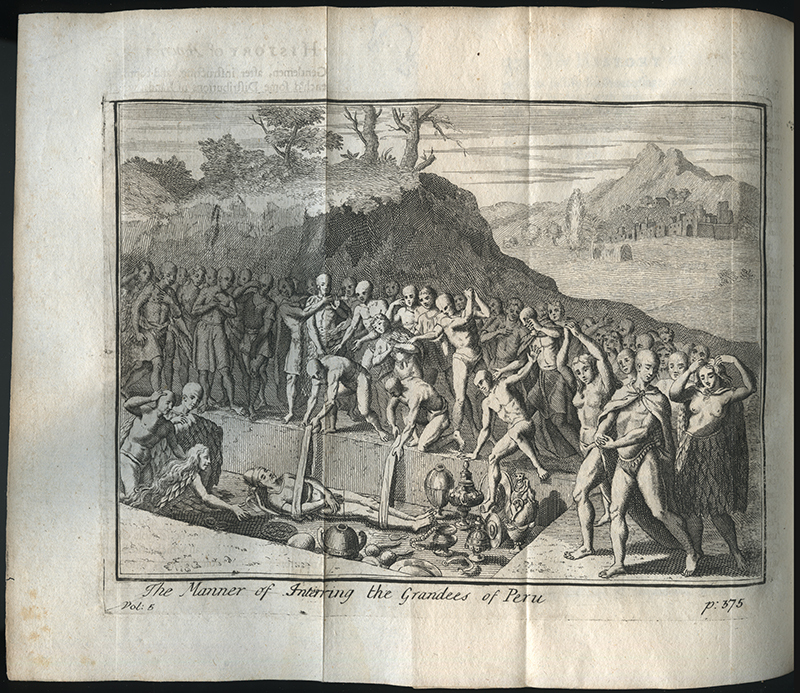 Antonio de Herrera y Tordesillas, chronicler of one of the most comprehensive histories of the Americas, narrates the great travels of the Spanish conquistador Francisco Pizarro and his interactions with the native Incas of Peru. During his travels between Lima and Cuzco, Pizarro attended the funeral of Almagro, the Incan rulers. The funerals of Inca grandees of Peru were ceremonies of great splendor attended by large numbers. Participants would decorate the body with gold and silver jewelry and bury it in large graves surrounded by golden vessels, food, feathered garments, and other sentimental objects. 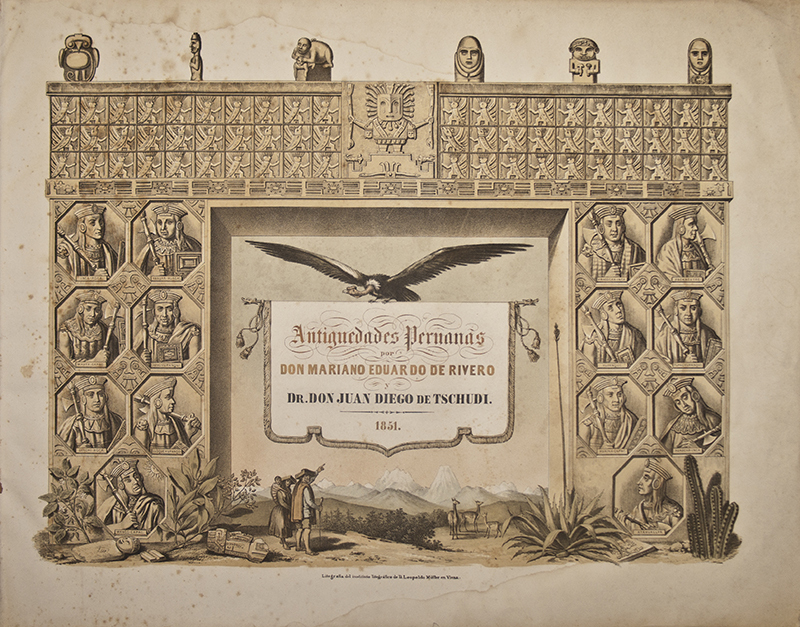 In 1838, Peruvian scientist and archaeologist Mariano Eduardo de Rivero and Swiss naturalist and explorer Johann Jakob von Tschudi traveled from Europe to study mineralogy in excavations of the Incan ruins. They co-authored a pictorial work of drawings that discussed Incan history, origins, government, religion, customs, and monuments. This atlas of drawings was found in Tennessee in an old barn; it originally was a gift from the Austrian government to President Fillmore during his presidency (1850-1853). It is unknown how this historical atlas made its way from the White House to a barn in Tennessee. 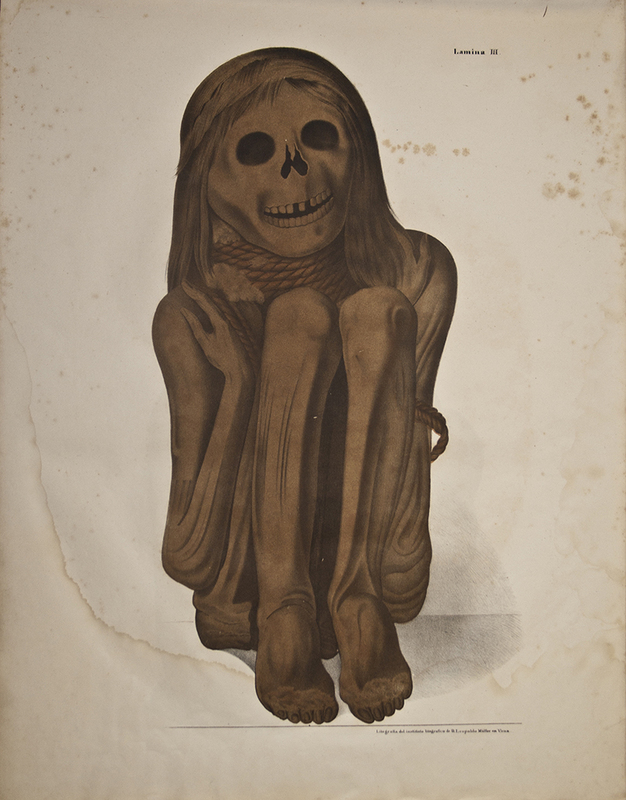 During the excavation of these Incan sites, Eduardo de Rivero and Tschudi came across an Incan burial site in the cave of "Huichay" that contained encased bodies, skulls, and other antiquities from the Incan period. The small skeletons were placed in the fetal position and mummified with a form of alcohol, wrapped in textiles, and bounded with ropes. Tschudi was fascinated with these skulls and studied them, using their different facial angles to support the Angle of Camper theory that claimed that the intellectual superiority of a race could be determined by skull shape. Tschudi kept a mummified fetus of a female infant in order to prove his findings. 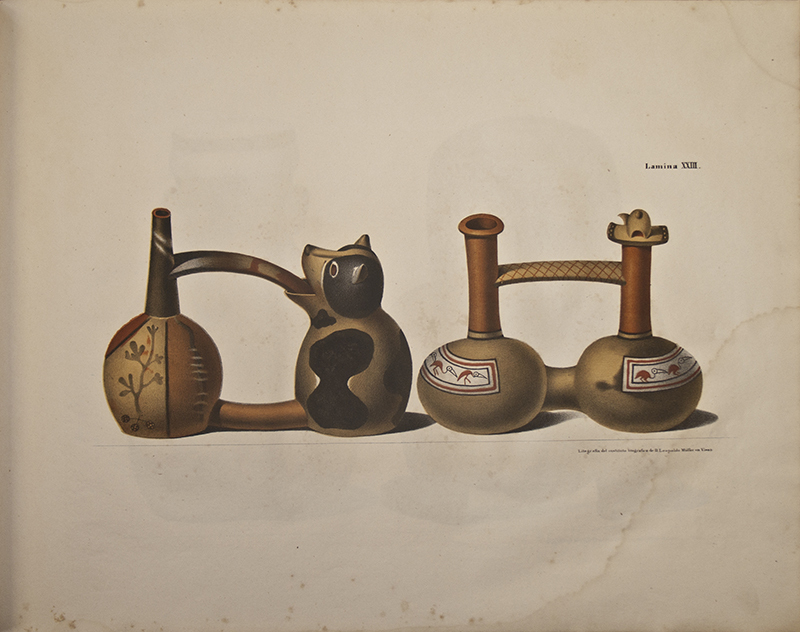 Among the Peruvian Incan burial sites, Eduardo de Rivero and von Tscudi excavated many of these Chimu or Early Incan Double Bodied Whistling Vessels. Water was poured into these pots and the bars attaching the vessels allowed water to flow through them, creating loud whistling or breathing noises that mimicked the sound of someone dying. Music was a very important aspect of Incan religious rituals, such as funerals. These Double Bodied Whistling Vessels would be used during funerals and were found amongst tombs with other antiquities. 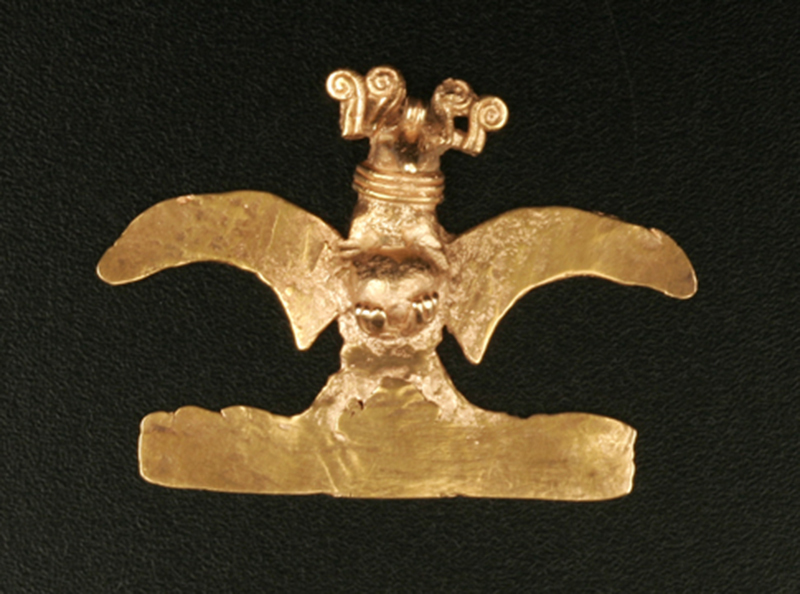 This gold pendant is a typical artifact 19th-century archeologists discovered while excavating Central American sites. These bird-form pendants were worn around the neck and made in many different sizes. Although each pendant was made differently, they commonly featured extended wings, splayed tails, and heads that projected forward to mimic a bird of prey. They may have been worn as a form of protection.