The Conquest of the Americas

In the late fifteenth century, Christopher Columbus and his Spanish crew stumbled across the Americas searching for a trade route to Asia. First landing in the Caribbean, the Spanish encountered Native Americans living among the islands. The initial peaceful interactions between the Spanish and the indigenous people of the New World swiftly gave way to the violence of conquest. Many of the Spanish had come to the New World seeking wealth; for them, conquest was an enterprise. The possibility of acquiring riches drew yet more Spaniards to the New World at the dawn of the sixteenth century. Hernán Cortés led the first major conquest in Mexico in 1519 and toppled the Aztec Empire there in 1521. Tales of the splendor of the Aztec Empire and its marvelous city Tenochtitlan spread across the Atlantic. In the ensuing years, more Spaniards arrived in the Americas, hoping to emulate Cortés’s success. The conquest of Mexico was rivaled only by Francisco Pizarro’s overthrow of the Inca Empire in 1532. The other conquistadores fell far short of Cortés and Pizarro but the total impact of these ambitious adventurers was to reshape the Americas and usher in a new period of colonial history.

This engraving depicts aspects of the Spanish conquests in the Americas from 1492 through 1531. Along the top of the image are King Ferdinand II, here depicted as Hernando V the Catholic King of Castile and Leon, and Queen Isabella. These two monarchs ruled during Christopher Columbus’s famed voyage that brought him to the Caribbean, and it was in their names that Columbus laid claim to the new territories. The conquests of the Indies and the newly discovered lands are depicted below the King and Queen. At the very bottom are images of Columbus and his brother, Bartholomew Columbus, both famed conquistadors. The positioning of the conquered lands, and of Columbus and his brother, below the images of the King and Queen highlights the dominance of the Spanish monarchs over their new territories and subjects.

Hernán Cortés (1485 – December 2, 1547) led the famed expedition that brought about the fall of the Aztec Empire in 1521 and the conquest of what today is Mexico. The conquest ended only after a brutal period of warfare. Cortés himself noted this in his writings. In reference to the Aztecs, Cortés wrote: “So great was their suffering that it was beyond our understanding how they could endure it.”

After defeating Moctezuma, Cortés shrewdly left much of the Aztec political and tributary system intact. He allowed local elites to retain influence over their polities, but required that they pay tribute to the Spanish Crown, through the encomienda system, similar to the tribute system paid to the Aztec emperors in earlier times. His conquest of the Aztecs established a model that other conquistadores, including Francisco Pizarro, sought to emulate. 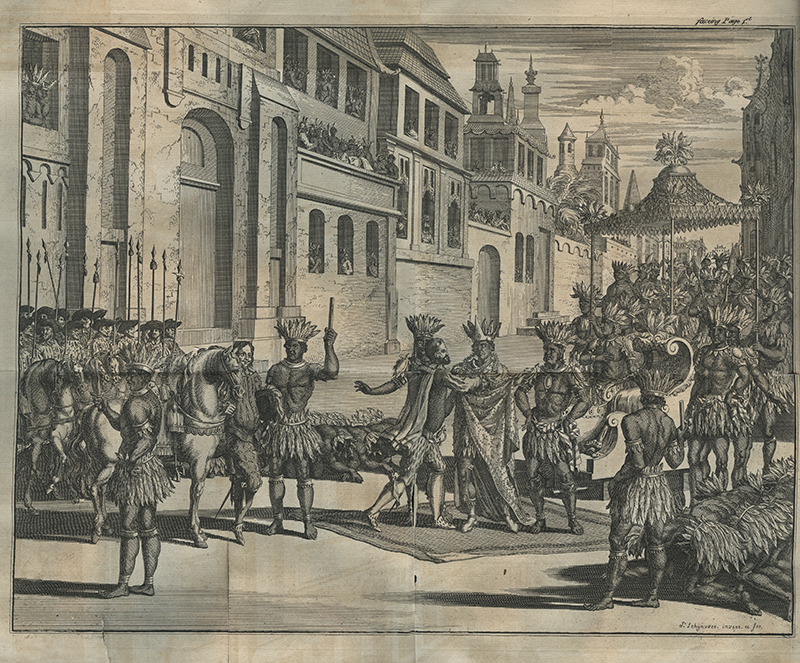 This engraving depicts Hernán Cortés and his men meeting with the Aztec Emperor Moctezuma just outside the city of Tenochtitlan in 1519. After their arrival, news of the Spanish had spread to the Emperor of the Aztecs. Moctezuma, initially unsure whether to attack or greet the newcomers, decided on meeting the Spanish. It was a fortunate turn of events for Cortés, who was outnumbered by the Aztecs. For Moctezuma, this fateful meeting would mark the beginning of the downfall of the Aztec Empire. Perhaps what is most striking about this engraving is the Europeanized representation of the meeting and the surroundings. This stylized heroic depiction of the first encounter between Cortés and Moctezuma would appeal to Solís, eighteenth-century historian and Spanish dramatist, and to his readers.

One of the most significant battles during Hernán Cortés’s conquest of Mexico, was the Battle of Otomba in 1520. The contest between the Spanish, their Tlaxcallan and Totonac allies, and the Aztec army took place on the plain of Otomba. Using cavalry to charge the Aztec lines, the Spanish were able to rout the Aztecs and secure a victory against a much larger force, paving the way for a Spanish victory at the city of Tenochtitlan. 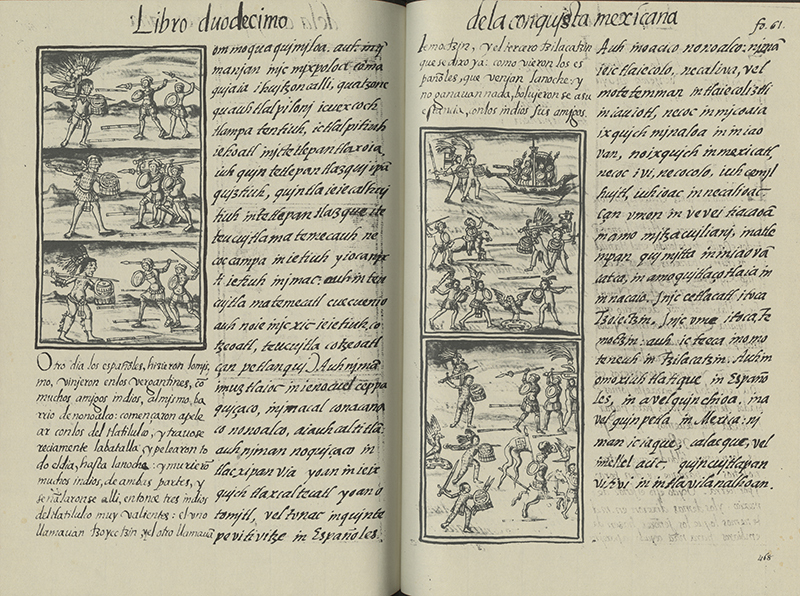 In both textual and graphical depictions, Fray Bernardino de Sahagún details the events of the Conquest of Mexico in Spanish and in the indigenous language, Nahuatl. Over a thirty-year period the Franciscan missionary recorded their pictorial responses to questionnaires about their culture and religious beliefs to compose the 12-volume codex that is now housed in Florence. Sahagún learned Nahuatl, not only to document the history of the Aztecs, but also to facilitate the evangelization of indigenous people. 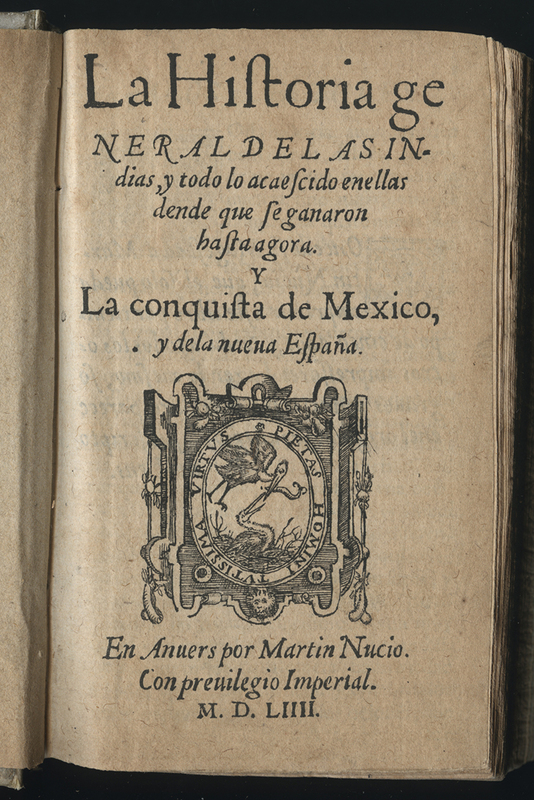 This history of the conquest of Mexico is well-known, and few can claim to have had as significant an impact as Francisco López de Gómara, a sixteenth-century historian from Seville whose book, Historia general de las Indias, provides keen insights into the Spanish conquest under Hernán Cortés. Originally published in 1553, the book was criticized by Gómara's contemporaries for allegedly sanitizing the acts of Cortés and his men during the conquest. Gómara's book raises important questions about how to approach the highly varied recounting of the conquests of the New World. 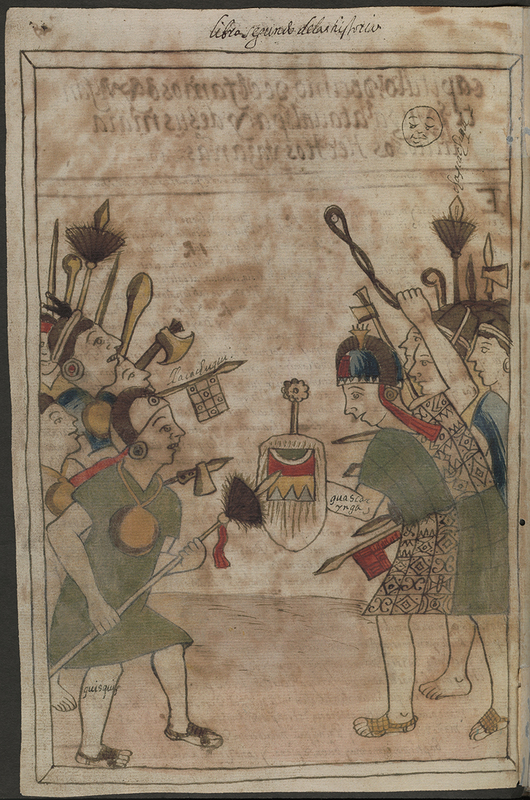 Prior to Francisco Pizarro's arrival to the Inca Empire in 1531, the two Incan princes, Atahualpa and Huascar, were engaged in a civil war over their father's throne. It was in the aftermath of the war between the two brothers that Pizarro first encountered Atahualpa. The devastating losses caused by the war and the spread of disease following the arrival of the Spanish likely aided Pizarro in his conquest of the Inca Empire. 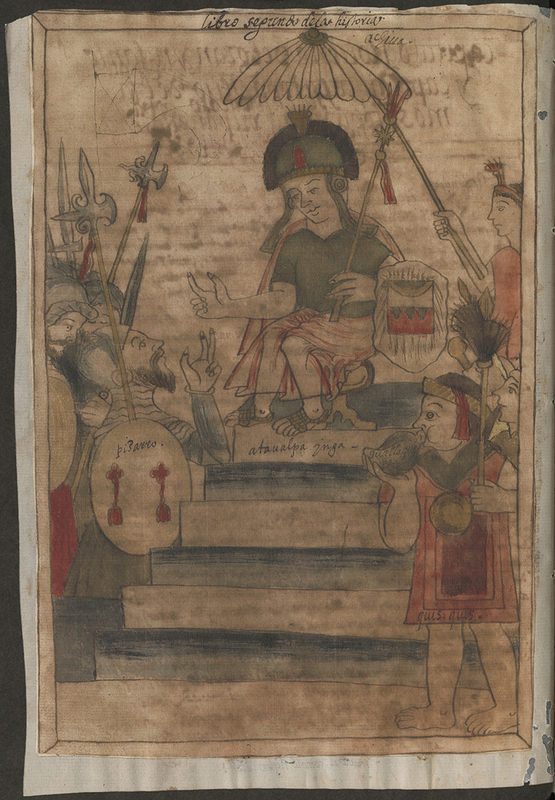 Francisco Pizarro met the Incan Emperor Atahualpa in 1532 after Atahualpa had defeated his brother Huascar in a bloody civil war. Atahualpa invited Pizarro and his men to Cajamarca believing them to be harmless, but it set the stage for his capture by Pizarro and the later conquest of the Inca Empire. 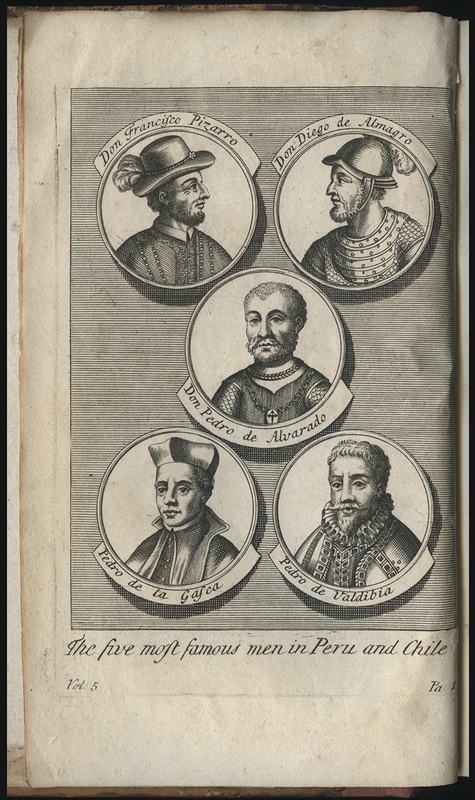 Francisco Pizarro is depicted here among other elite men who, through the blessings of the King of Spain, were able to acquire privileges and wealth in Spain's new kingdom of Peru. Much like Cortés before them, the possibility of acquiring vast riches and influence drew Spaniards to the New World. Through the established encomienda system, some of the more fortunate conquistadores were able to enrich themselves and their associates following their conquests.

The conquest of the Aztecs by Hernán Cortés led others to attempt to replicate his success in other parts of the Americas. Álvar Núñez Cabeza de Vaca, whose map is depicted here, participated in the ill-fated Narváez Expedition of 1527, intended to establish settlements in Florida. Cabeza de Vaca was one of the four men who survived the expedition, which began with 300 men in Florida and ended with a handful of survivors in Mexico City. The conquest drew daring and desperate men to the Americas who sought glory and riches. 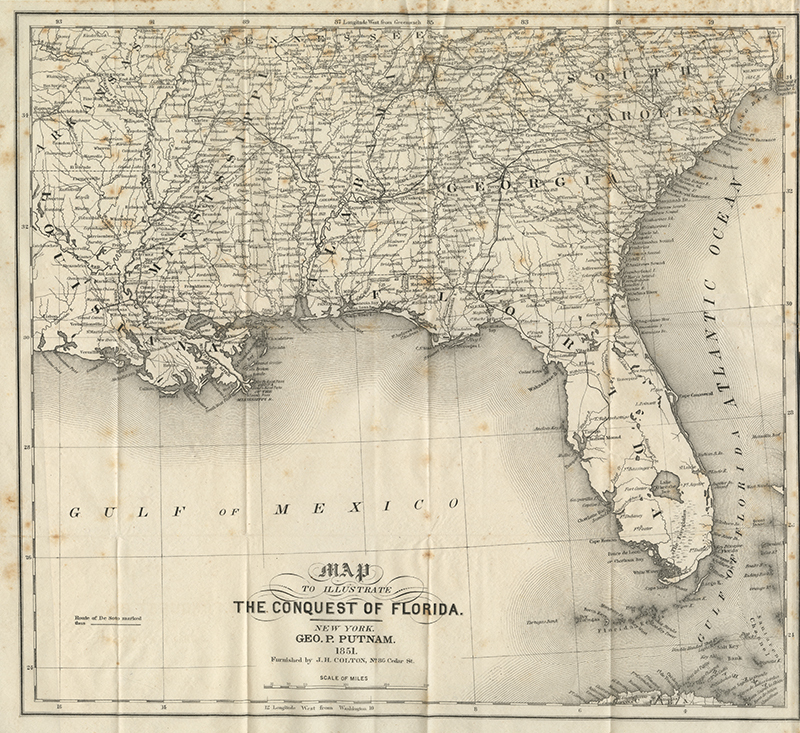 Having served as a lieutenant for Francisco Pizarro in his conquest of the Inca, Hernando de Soto (1495-1542) led his own expedition into the southeastern regions of what is today the United States. Landing somewhere between Tampa Bay and Charlotte Harbor in present-day Florida, de Soto began his journey of conquest in 1538. The map depicts his path. Like conquistadores before him, Soto and his men hoped to find gold, but were disappointed. The Spaniards encountered various indigenous groups in their journey through the modern-day states of Florida, Georgia, Tennessee, Alabama, Mississippi and Louisiana, but the riches of Mexico that had drawn so many conquistadores to the Americas were nowhere to be found. De Soto, the first European to see and cross the Mississippi in 1541, died shortly afterward in Louisiana.

← Forced Migration, Slavery, and Freedom in Latin America
Wandering Women: Travelers to Latin America →
The Conquest of the Americas