Beasts and Botany: Scientific Expeditions to Brazil and Beyond

Following the “discovery” of the New World in 1492, thousands of people traveled to Latin America in search of new opportunities. Among them were a variety of naturalists, interested in studying the region’s natural resources for scientific, medicinal, and political purposes. This exhibit offers an expository view of some of the most influential naturalists in Latin America. It spans the entire continent and covers more than three hundred years of study. 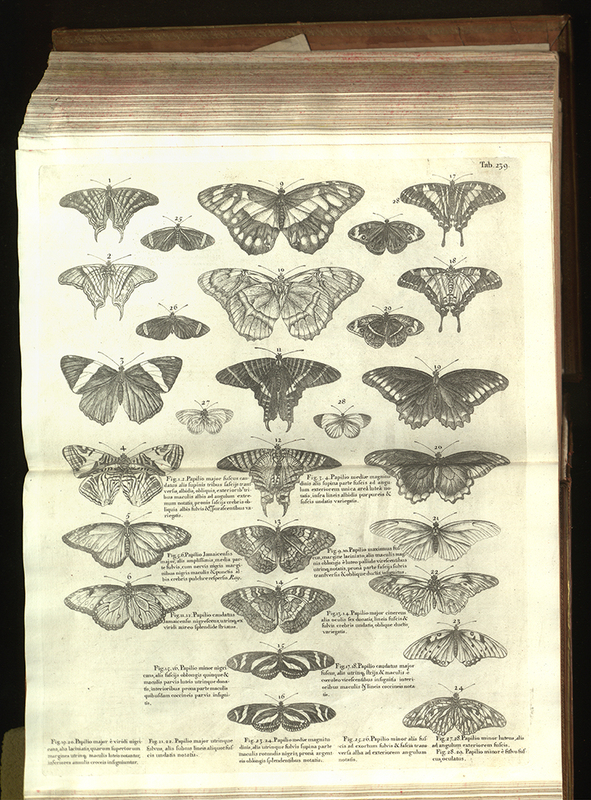 In 1687, Hans Sloane, an Irish physician and naturalist, boarded the HMS Assistance and set sail for Jamaica, intending to work for the new Governor of Jamaica, the second Duke of Albemarle. Sloane had previously served Queen Anne, George I, and George II. His station in Jamaica provided him with the unique opportunity to document wildlife and also to research potential medicinal uses of the plants and herbs he discovered. Sloane’s stay in Jamaica only lasted fifteen months due to the unfortunate death of the Duke of Albemarle; however Sloane would publish two volumes documenting his experiences, each filled with hundreds of illustrations and observations. After his death in 1753, Sloane donated his collection of books, drawings, flora, and natural history relics to the United Kingdom. A significant portion of his collection provided the foundation for the Natural History Museum in London. 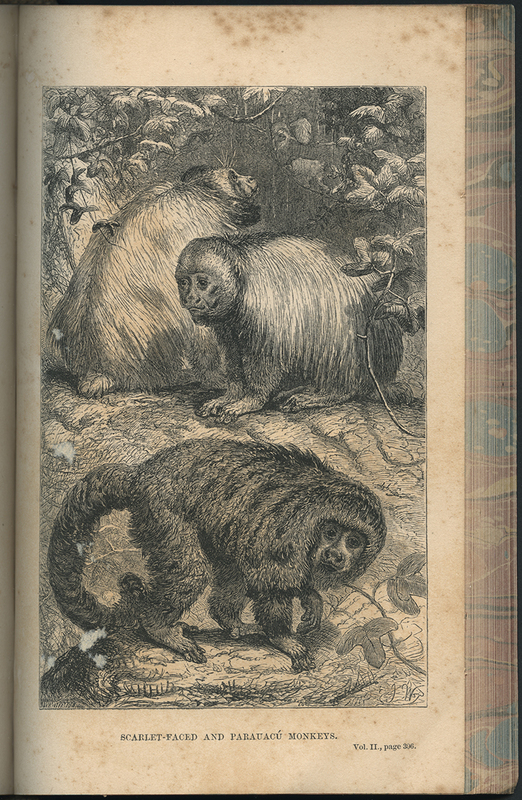 Henry Walter Bates, an English naturalist and explorer from the 19th century, is best known for his book The Naturalist on the River Amazons. Bates’ two-volume book includes descriptions and illustrations of animals, insects, and plants he observed during his eleven-year stay in the rainforest with fellow naturalist Alfred Russel Wallace. His findings resulted in the identification of nearly 8,000 new species. Bates also contributed greatly to the field of biology through his postulation of the idea of mimicry in nature. 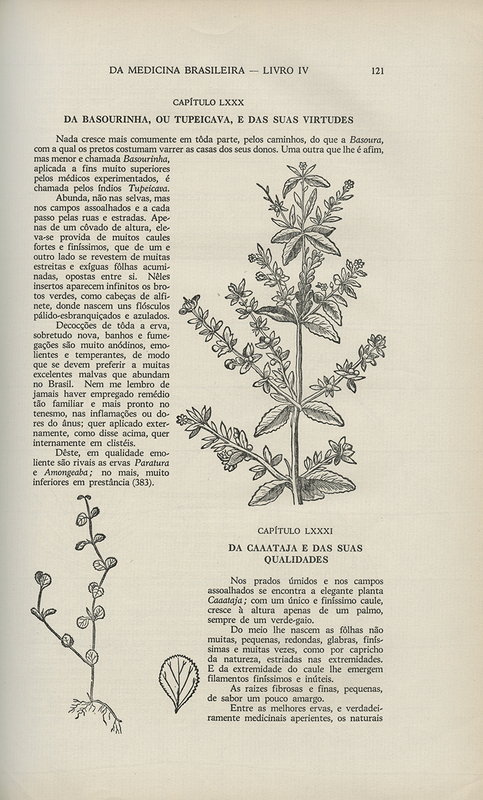 Willem Piso, known as Guilherme Piso in Portuguese, was a Dutch naturalist and physician who traveled to Brazil from 1637 to 1644 during the Dutch occupation of northern Brazil. Although officially employed as a physician, Piso became interested in the tropical diseases he treated and began to document the potential medicinal uses of Brazilian flora as well as traditional indigenous therapies. Working together with Georg Marcgrave and artists Albert Ekhout and Frans Post, Piso published the História natural do Brasil ilustrada in 1648. Due to Piso’s early study of Brazilian flora and fauna relative to the Portuguese arrival to Brazil in 1500, his work was a crucial contribution and provided countless valuable insights towards their use and applications. 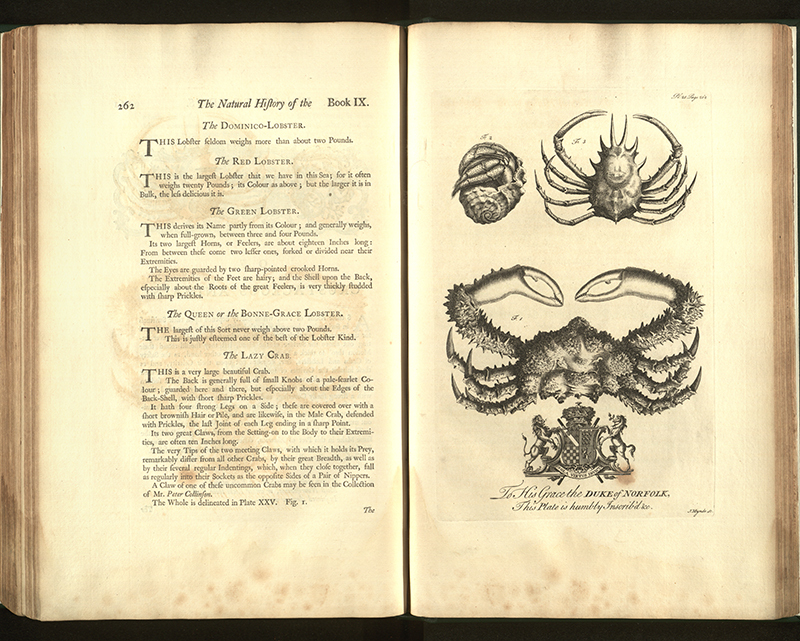 Before traveling to Barbados to study natural history, Griffith Hughes, a Welsh naturalist, author, and cleric, lived in Pennsylvania and served as a rector to Welsh congregations. After being transferred to St. Lucy’s Parish in 1736, Hughes began to further his research on the flora and fauna of Barbados. In an attempt to gain favor and patronage from the elites, Hughes had Georg Dionysius Ehret and other artists dedicate many of his illustrations and plates to British nobility. Hughes returned to London in 1750 where he immediately published The Natural History of Barbados: In Ten Books. It contains both observations of the wildlife he encountered as well as descriptions of possible medicinal uses for some species of plants. Ultimately, Hughes’ legacy is unclear: some have criticized his work for its lack of significant scientific contributions, while others, such as famed botanist Carl Linnaeus, praised Hughes for his detailed account of the diseases he encountered in Barbados. 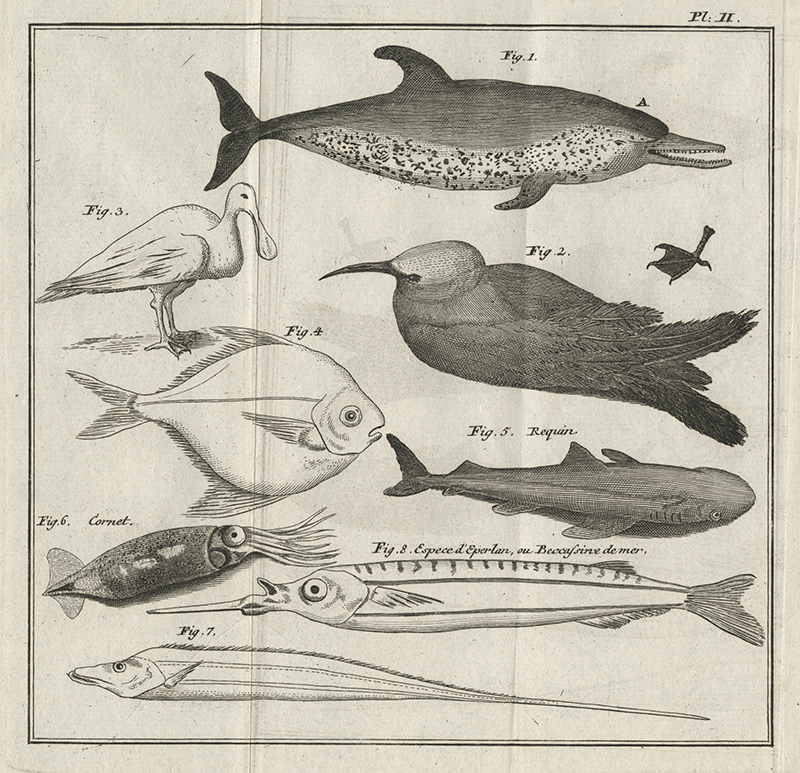 In 1763, Antoine-Joseph Pernety joined Louis Antoine de Bougainville’s expedition to Santa Catarina and the Falkland Islands. Pernety, a French writer and occasional Benedictine monk, librarian, and founder of the Illuminati, was employed as the official priest, naturalist, and chronicler for the expedition. The expedition’s primary goal was to establish the Port Saint Louis settlement on the island. Pernety worked to document the flora and fauna of the island in order to send the information to King Louis XV. He left the Falkland Islands for France in 1764, after the French rule of the islands was officially established. He spent the rest of his life dedicating himself to the Illuminati, an Enlightenment-based secret society that aimed to create a new world order. 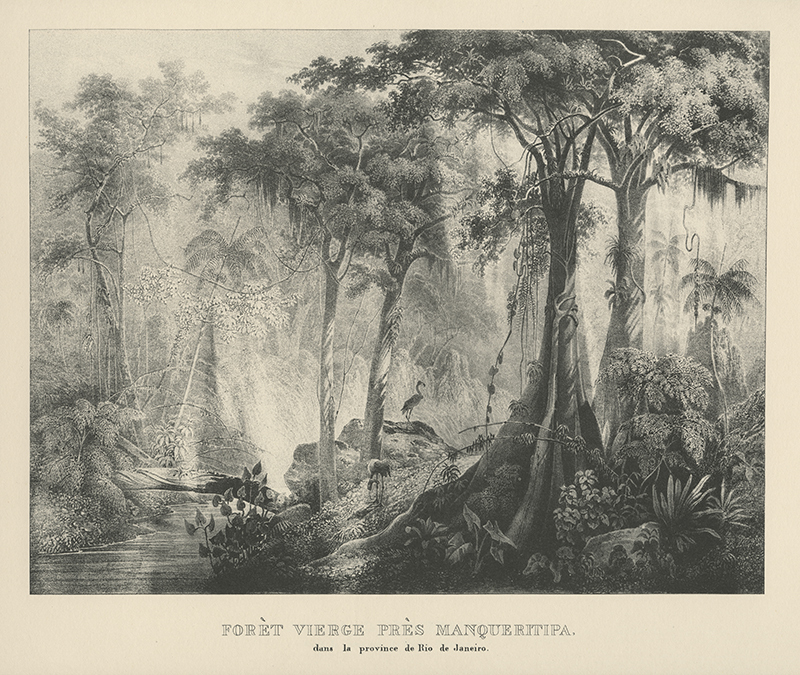 Johann Moritz Rugendas, was a seventh-generation German painter who studied art and drawing from an early age. In 1821, Rugendas traveled to Brazil and joined an expedition led by Baron von Langsdorff. For the next four years, Rugendas traveled across Brazil. He illustrated life in cities, such as Rio de Janeiro, as well as in the Amazon rainforest. Rugendas spent the next few years working in Europe on his most famous book, the beautifully illustrated Voyage pittoresque dans le Brésil. He then returned to Latin America after being re-inspired by the work of Alexander von Humboldt. Rugendas died in 1858 and is considered one of the most influential artists in Brazil during the 19th century.

The Album de la Comisión Corográfica contains a series of plates collected during the Chorographic Commission of 1850 in the Viceroyalty of New Granada, encompassing modern-day Venezuela, Colombia, Ecuador, and Panama. Directed by Augustín Codazzi and aided by painters such as Carmelo Fernández, Enrique Price, and Manuel María Paz, the Chorographic Commission aimed to develop an accurate map of the Viceroyalty of New Granada that could be used for scientific, economic, and political purposes. The commission documented the different indigenous groups in the region, marked areas rich in natural resources, and demarcated political boundaries. The commission intended to promote the development of New Granada by advancing economic interests and promoting a national identity. While not originally intended to be a botanical expedition, artists and participants in the commission were heavily influenced by the work of the Royal Botanical Expedition and famous botanists such as Alexander von Humboldt. They emphasized the documentation of the region’s ecological and natural resources that could be used for economic development. 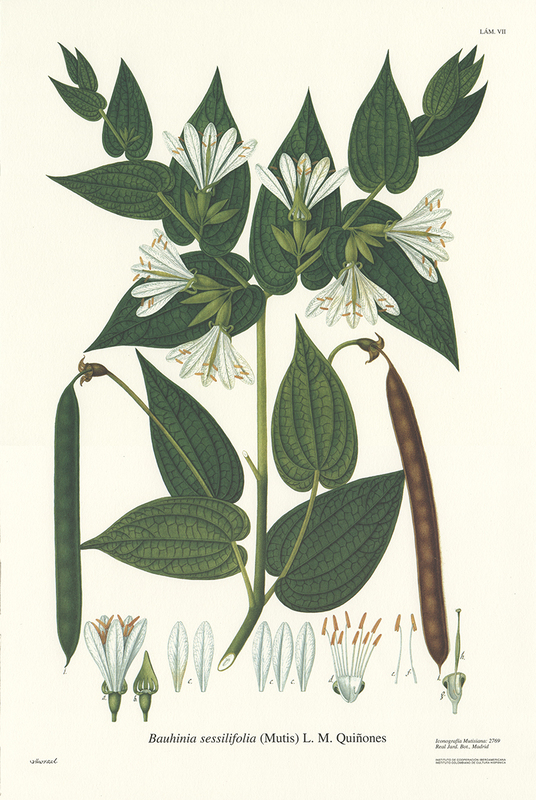 Physician, mathematician, and priest, José Celestino Mutis was also an avid botanist who decided to travel to America in order to further his botanical studies. Twenty years after Mutis’ original petition, the King of Spain authorized him to lead the Royal Botanical Expedition to the Viceroyalty of New Granada, exploring much of modern day Colombia. Mutis would lead the expedition for the next 25 years until his death in 1808. He worked with a team of botanists, artists, geographers, and translators to produce thousands of illustrations and plates of plants and animals. His work resulted in an expansive collection of dried plants that were transported back to Spain and displayed in the Royal Botanical Garden in Madrid. 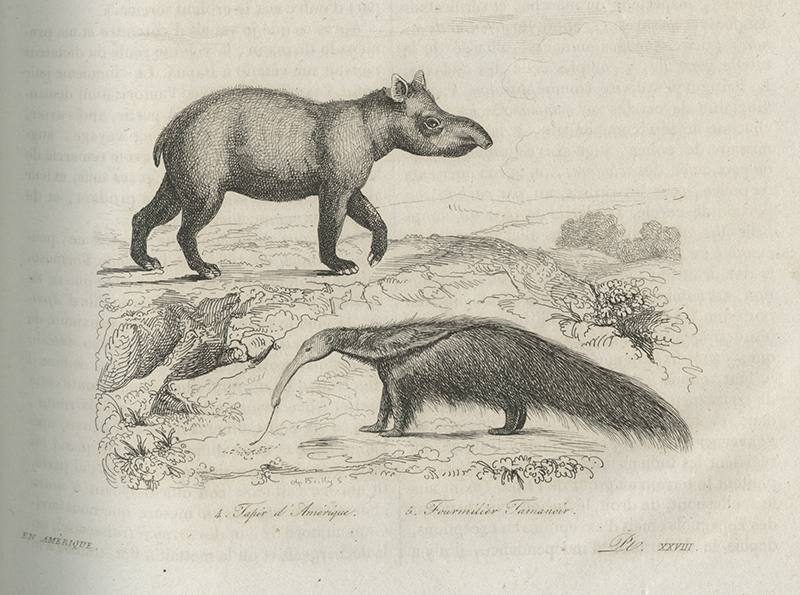 While Alcide D’Orbigny studied a variety of subjects including geology, archaeology, and zoology, he was especially influential in the field of natural history. Born in France to an amateur naturalist, D’Orbigny’s interest in natural history seemed to come easily. Beginning in 1825, he traveled across most of South America, documenting his findings and collecting thousands of samples that were brought back to France for further study in 1833. His most famous work, La Relation du voyage dans l’Amérique Méridionale pendant les annés 1826 à 1833, was widely praised and inspired naturalists such as Charles Darwin. D’Orbigny later received the Gold Medal of the Société de Géographie of Paris in 1834. In 1853, D’Orbigny was named as a professor of paleontology at the Muséum Nacional d’Histoire Naturelle and recognized for his influence in the fields of botany, zoology, and paleontology. 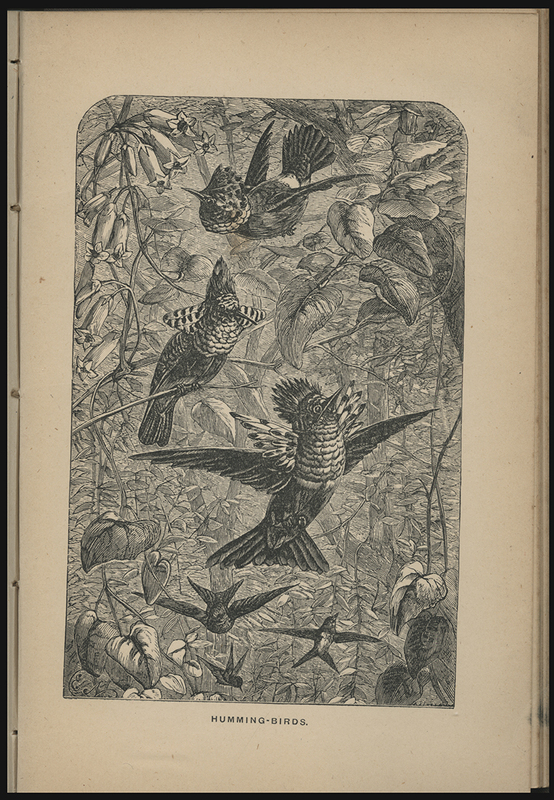 Adams was an English born writer, translator, and journalist who published in a variety of genres including history, military affairs, literature, politics, and natural history. While not formally trained as a botanist or natural historian, Adams, an avid traveler, documented plants and animals in Egypt, Jordan, the Arctic, and the Amazon rainforest. In 1879, he published The Amazon and its Wonders, which offers a narrative of his travels as well as his illustrations and observations concerning a variety of plant and animal species. Due to his particular interest in ornithology, many of Adams’ descriptions and illustrations focus on birds, such as the hummingbirds pictured here.

← Indigenous Movement to Pre-Columbian Ceremonial Centers
Harnessing the Natural Resources of Latin America →
Beasts and Botany: Scientific Expeditions to Brazil and Beyond